The Mountain West Conference (formally abbreviated MW since July 2011; informally MWC), popularly known as the Mountain West, is the youngest of the college athletic conferences affiliated with the NCAA’s Division I FBS (formerly I-A). The MWC officially began operations in July 1999. Geographically, the MW covers a broad expanse of the western United States, with member institutions located in California, Colorado, Idaho, Nevada, New Mexico, Texas, and Wyoming, and has announced expansion into Hawaii in 2012. The conference introduced a new logo for the 2011 season to reflect on the changes. Craig Thompson has served as Commissioner of the MW since its founding in 1999.

Charter members included Air Force, BYU, Colorado State, New Mexico, San Diego State, UNLV, Utah, and Wyoming. Before forming the Mountain West Conference, seven of the eight charter members had been longtime members of the Western Athletic Conference; half were WAC charter members at its formation in 1962 - UNLV had only joined the WAC in 1996.

The WAC expanded from 10 to 16 universities in 1996, absorbing three teams from the defunct Southwest Conference (SWC) (Rice, SMU, and TCU), adding two from the Big West (San Jose State and UNLV), and Tulsa from the Missouri Valley. After three football seasons, most of the pre-expansion members decided that the new WAC was oversized, and departed to form the Mountain West Conference. The MWC added a ninth team in 2005: TCU, also a former WAC and SWC member, which joined after four seasons in Conference USA.

In recent years, the Mountain West has been very successful in football. The MWC's champion has qualified for a BCS bowl four times since the BCS formula was tweaked to allow non-BCS conferences to play in BCS bowls if ranked in the top 12.

On October 14, 2011 the Mountain West & Conference USA announced a football only alliance forming a 22 team league. [6] 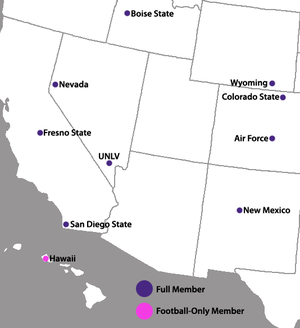 Since the 2009-10 season, the Mountain West and Missouri Valley Conferences have held an annual challenge series between all members of the MWC and an equal number of the 10 MVC teams in basketball. The first game was on November 13, featuring the Bradley Braves and the BYU Cougars in Provo and it concluded on December 23 with the Wyoming Cowboys visiting the Northern Iowa Panthers in Cedar Falls, Iowa. The challenge is similar to the ACC-Big Ten Challenge, which pits men's basketball teams from the Atlantic Coast Conference and the Big Ten Conference.[10]

Non-conference (including other sports)

Future non-conference (including other sports)

The Mountain West Conference will have agreements with the following bowls for 2010-17:

ESPN created the Bowl Challenge Cup in 2002 for the conference that had the best college football bowl record among Division I Football Bowl Subdivision conferences. The conference has won it four times, more than any other. They finished 4-1 in bowl games in 2011, the best record out of all conferences.[12]

The Mountain West's slogan is "Above the rest," and over half of the member institutions are at more than 4,000 feet above sea level (although the average elevation will drop to 3,822 feet in 2011-12 and 3,473 feet in 2012-13). This impacts endurance in sports like football, soccer, and the distance races in track & field and swimming meets, and aerodynamics in baseball, softball, golf, and the discus and javelin throws. The Mountain West's institutions have one of the highest average elevations in NCAA Division I sports.