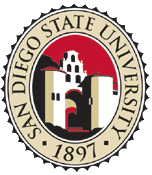 San Diego State University (SDSU), founded in 1897 as San Diego Normal School, is the largest and oldest higher education facility in the greater San Diego area (generally the City and County of San Diego), and is part of the system. It is the third-oldest university in the system, and one of the oldest universities in California. SDSU has a student body of approximately 34,500 (as of the beginning of the Fall 2006 academic year) and an alumni base of more than 200,000.

San Diego State University is a member of the American Association of State Colleges and Universities (AASCU), the , the , and the , a national organization of universities that promotes science and technology education and research.

One in seven San Diegans with a college degree attended SDSU, [ [http://advancement.sdsu.edu/marcomm/news/sdsufacts.html SDSU Significant Rankings and Distinctions] ] making SDSU a primary educator of the region's work force. Committed to serving the diverse region, SDSU ranks among the top ten universities nationwide in terms of ethnic and racial diversity among its student body, as well as the number of bachelor's degrees conferred upon minority students. [ [http://advancement.sdsu.edu/marcomm/news/sdsufacts.html SDSU Significant Rankings and Distinctions] ]

For the beginning of the 2006-2007 academic year, SDSU expanded its classrooms and support space by more than convert|200000|sqft|m2 with the opening of three new buildings, the College of Arts and Letters, the Calpulli Center and BioScience Center. The buildings, respectively, feature high-technology classrooms, upgraded health and wellness facilities, and scientific research laboratories.

SDSU's Astronomy Department owns the located in the . It operates the observatory concurrently with the . []

, then the , gave the graduation commencement address at San Diego State University on , . [ [http://sdsuniverse.info/story.asp?id=6269 Forty Years Later, the Magic of JFK Lingers on the Mesa] , Coleen L. Geraghty, "SDSUniverse" (May 12, 2003)]

:"See [http://advancement.sdsu.edu/marcomm/news/sdsufacts.html SDSU Significant Rankings and Distinctions] "
* For two years in a row, SDSU has been ranked the No. 1 most productive research university, among schools with 14 or fewer Ph.D. programs based on the Faculty Scholarly Productivity Index. --Academic Analytics, 2007
* SDSU has been designated a "Research University" with high research activity by the Carnegie Foundation.
* Since 2000, SDSU faculty and staff have attracted more than $1 billion in grants and contracts for research and program administration.
* SDSU is the largest university in San Diego and the fifth largest in California.
* One in seven adults in San Diego who holds a college degree attended SDSU.
* SDSU is home to the first-ever MBA program in Global Entrepreneurship. As part of the program, students study at four universities worldwide, including the United States, China, the Middle East, and India. Corporate partners include , , , , and .
* In 1970, SDSU founded the first program in the country.

For the 2004-2005 academic year, SDSU received over $157 million USD in external funding from grants and contracts, as well as an additional $57 million USD in donations and charitable giving. [ [http://www.calstate.edu/UA/0405externalreport/campus/san_diego.shtml 2004-2005 Annual Report on External Funding, California State University] ] For 2005-2006, SDSU received $152 million USD in grants and contracts to support research. This is followed by $47.7 million USD in donations, gifts and other charitable giving. [ [http://www.calstate.edu/ua/0506externalreport/campus/san_diego.shtml 2005-2006 Annual Report on External Support to the CSU -- San Diego State University] ]

An auxiliary to [http://advancement.sdsu.edu/tcf/index.html The Campanile Foundation] is the [http://goaztecs.collegesports.com/boosters/boosters-static-info/booster-overview.html Aztec Athletic Association] , which primarily raises funds for the student athletes in the San Diego State University athletics programs (see discussion of Athletics below and at ).

;Observatory
*
** An astronomical owned by SDSU and operating concurrently with the .
*** SDSU is the only institution in the California State University system that offers a complete academic program in , including the awarding of graduate degrees.

;Other
*"The Koala" is a student-run humor publication.

SDSU competes in NCAA FBS. Its primary conference is the ; its women's team participates in the and its men's team participates as an Associate Member of the (the "" Conference). The ice hockey team competes in the with other western region club teams (www.sdsuhockey.com). The crew team's championship regatta is in the WIRA (Western International Rowing Association). The university colors are scarlet (red) and black, SDSU's athletic teams are nicknamed "", and its current is the Aztec Warrior, historically referred to as "Monty - ". Athletics revenues have been down recently. [citation
url=http://www.signonsandiego.com/uniontrib/20080222/news_1s22azbudget.html
title=Football shy of dollar goal at SDSU
newspaper=
accessdate=2008-02-25
last=Schrotenboer
first=Brent
date=, ]

;Football
* The football team plays at (formerly known as "Jack Murphy" Stadium). See also [http://goaztecs.collegesports.com/facilities/sdsu-trads-qualcomm.html The Q] They are also the Big Brother team to the Brisol Aztecs [http://www.bristolaztecs.co.uk Aztecs] .

;Baseball
* The baseball team plays in on the SDSU campus, named after the SDSU baseball and basketball player and current head coach, .

;Other sports
* The new $12 million dollar aquatic sports complex (known as the [http://goaztecs.cstv.com/genrel/032107aaa.html Aztec Aquaplex] ), includes an Olympic-size swimming pool, a separate recreational pool and beach, and a spa. This facility is home for the swimming and diving teams, in addition to providing recreational use for all SDSU students and community members.
** [http://arc.sdsu.edu/pool/index.php SDSU Campus Recreation pool web page]
* In conjunction with the , the [http://as.sdsu.edu Associated Students] organization of San Diego State University runs the [http://goaztecs.collegesports.com/facilities/sdsu-mission-bay.html Mission Bay Aquatic Center (MBAC)] in , just a few miles west of the main campus. See also the [http://www.missionbayaquaticcenter.com MBAC homepage] . The MBAC provides for all manner of outdoor activities and sports for SDSU students, administration, and faculty.

:"For more information, go to [http://www.sa.sdsu.edu/cfsl/index.html SDSU Center for Fraternity and Sorority Life] "

Fraternal organizations have been a core component of the campus community since 1899. Currently there are over 48 social fraternities and sororities, including both general and culturally based organizations, represented by four governing councils.

* The San Diego State Marching Aztecs and Pep and Varsity Bands are often seen at many sporting events including Football, Basketball and even Volleyball ( [http://bands.sdsu.edu The University Bands] ).

* The San Diego State University (SDSU) campus is known as "Montezuma Mesa", as the university is situated on a overlooking Mission Valley and is located at the intersection of Montezuma Road and College Avenue.

* The two main characters from the 77th Academy Awards (2004) Academy Award-winning and -winning comedy/drama film were roommates during their college days at SDSU.
* The SDSU campus is the setting of , the fictional university in television network show "". [http://www.thedailyaztec.com/media/storage/paper741/news/2006/07/31/City/veronica.Mars.Lands.At.Sdsu-2135096.shtml?norewrite200610021532&sourcedomain=www.thedailyaztec.com (link)]
*The exterior shots of Rancho Carne High School in the movie "" were mainly filmed at San Diego State University
*Portions of "" were filmed around the SDSU campus
*A few former "" cast members currently attend SDSU.Fact|date=January 2008
*SDSU is mentioned by Bart Simpson in "" episode "The President Wore Pearls (Season 15, 2003)". Lisa becomes president of Springfield Elementary and unknowingly strips the school of all of its recreational activities, leading Bart to say, "Lisa, you made this school even worse. And it wasn't exactly San Diego State to begin with."

The San Diego State University shooting occurred on August 15, 1996. A thirty-six year old graduate engineering student, while apparently defending his thesis, shot and killed his three professors, Constantinos Lyrintzis, Cheng Liang, and D. Preston Lowrey III, at San Diego State University. The shooter, who was suffering from certain mental problems, was convicted on July 19, 1997 and was sentenced to life in prison. As a memorial, tables with a plaque of each victim's information and contributions have been placed ajacent to the College of Engineering building.

On , , the announced the arrest of 96 individuals, of which 33 were San Diego State University students, on a variety of drug charges in a narcotics dubbed . [cite web|url=http://www.cbs8.com/misc/SDSU_mug_shots.pdf|title=Mug Shots from Operation Sudden Fall|publisher=CBS News 8|accessdate=2008-05-06|format=PDF] It was originally reported that 75 of the arrested were students, but the inflated number included students who had been arrested months earlier, in some cases for simple possession. [cite web|url=http://www.signonsandiego.com/news/metro/20080508-1041-bn08arrests.html|title=Officials differ on number of SDSU students snared in sting |publisher=|accessdate=2008-05-08] The bust, which was the largest in the history of , drew a mixed reaction from the community. [cite web|url=http://www.signonsandiego.com/news/metro/20080508-9999-1n8sdsu.html|title=SDSU drug sting draws scorn, praise |publisher=|accessdate=2008-05-08]

;Former residence halls
*Queztal (women only)"Opened in 1937 as the first residence hall. It was next to present day Aztec Center."
*Templo del Sol, Zapotec, Toltec & Tarastec Halls"This complex was on the west side of the campus next to Tony Gwynn Stadium across from Chapultepec. Currently it is the site of a new Softball stadium and tennis court complex. They were the same red brick design and floor plan as Maya and Olmeca halls on the east side of campus."