MountainWest Sports Network, informally known as the mtn. (pronounced as the mountain), is an American regional sports network dedicated to the Mountain West Conference.

The Mtn. premiered on September 1, 2006 as the first network dedicated to a college athletic conference - the Division I Mountain West Conference (MWC). The Mtn. annually produces and airs more than 170 collegiate sporting events, including football, basketball, Olympic sports, and conference championship coverage. The Mtn.’s expanded coverage includes news programming, coaches’ shows, pre and post game analysis and feature programming about MWC athletics. The Mtn. is owned by the MWC, NBCUniversal and CBS Corporation. Although CBS owns the largest stake (40%), NBCUniversal handles all operational and administrative responsibilities of the network.

The network has covered over 800 live sporting events in its first four years of operation. Details of football and basketball telecasts are listed in the events section below. Also on the schedule are current and former Olympic sports like baseball, softball, soccer, volleyball, and track and field. The Mtn. airs pregame and post game shows from its suburban Denver, Colo. studios in support of most of the network's live event coverage, including football, men's and women's basketball, baseball, soccer, volleyball and softball. Halftime shows take place for all football and men's and women's basketball game telecasts.

(past and present listed in alphabetical order)

Since 2006, The Mtn. has received 28 Emmy Award nominations and won five times. The network has also garnered three Promax/BDA nominations and won two Promax Awards. In 2009, The Mtn. was a finalist in the Live Game or Live Event for Corporate Entities category at the SVG/NATAS Global Media Awards for College Sports.

The Mtn. is currently available in all nine MWC markets on the following providers:

On February 22, 2008, DirecTV and The Mtn. reached a carriage agreement in which the channel was added in time for the 2008-09 academic year.[1] Currently, DirecTV only carries the HD feed of the channel for certain football and basketball games.

On June 1, 2007, the presidents of Brigham Young University and the University of Utah, unsatisfied with the current distribution, issued a joint press release that they "retained a sports broadcasting attorney to explore all possible options in improving the distribution of athletic broadcasts to their fans".[3]

On June 5, 2007 the MWC Board "reaffirmed its unanimous support of the league's television model and its commitment to working collectively as a unified group", and its Directors unanimously voted to join BYU and Utah to retain the attorney they had hired.[4]

In an interview with KUTV, President Michael K. Young of Utah stated that "Every [MWC member] knows...President Samuelson and I have been clear about this for the last year and a half that it is absolutely essential that we get on satellite to make our games available to our fans. Anything short of that is unacceptable." He then added that "We are passionately committed to our having our football games being on TV this year."[5]

Since Time Warner Cable does not have a carriage agreement with The Mtn., it is unavailable on cable in 2 areas in MWC's market: The Dallas/Ft. Worth area, and a significant portion of San Diego County.

As of November 3, 2007 Precis Communications which services roughly 25 rural areas throughout Utah, Nevada and Arizona has refused to carry The Mtn. unless they are allowed to put it on a tier package.[citation needed] Comcast states that it is a requirement that it comes with expanded basic service. Precis Communications has stated that "in order to pay for the cost of having The Mtn. we would either have to have it on a tier or raise all our customers rates by 2 to 3 dollars, which would dissatisfy our customers who do not want The Mtn."[citation needed] These disputes are similar to those that Big Ten Network had its in first year on the air. 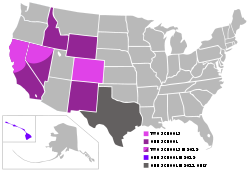 The Mtn. HD is a 1080i high definition simulcast of The Mtn. that launched on November 22, 2008 at 11 AM MT. The first show on the new HD version of the channel was MWC Football Saturday, followed by two football games in HD: first Colorado State at Wyoming, then the Brigham Young at Utah rivalry game[6]

Starting in 2010, all football games aired in HD as will the 2011 Conoco Mountain West Conference Basketball Championships.[8]

Information on specific programs comes from the half-hour special This is the Mtn., which aired in conjunction with the DirecTV launch. See also: