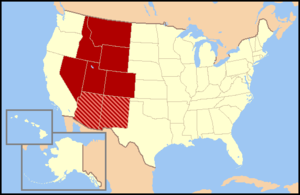 Regional definitions vary from source to source. The states shown in dark red are always included, while the striped states are usually considered part of the same region called the Mountain States. 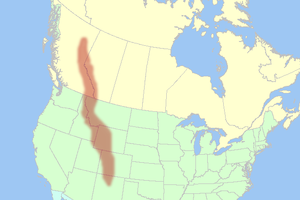 An enlargeable map of the Rocky Mountains of western North America.

The Mountain States (also known as the Mountain West and the Interior West) form one of the nine geographic divisions of the United States that are officially recognized by the United States Census Bureau. It is a subregion of the Western United States. The Mountain States are usually split up into two other regions known as the Northwest and Southwest. Idaho, Montana, and Wyoming are considered part of the northwest, while Arizona, New Mexico, Colorado, Nevada, and Utah are considered part of the southwest.

The division consists of eight states: Arizona, Colorado, Idaho, Montana, Nevada, New Mexico, Utah, and Wyoming. These eight states have the highest mean elevations of all 50 U.S. states. Together with the Pacific States of Alaska, California, Hawaii, Oregon and Washington, the Mountain States constitute the broader region of the West, one of the four regions the United States Census Bureau formally recognizes (the Northeast, South and Midwest being the other three). The word "Mountain" refers to the Rocky Mountains, which run north-south throughout Montana, Idaho, Wyoming, parts of Utah, Colorado, and New Mexico. Arizona and Nevada, as well as most other parts of Utah and New Mexico have other mountain ranges and scattered mountains located in them as well.

Mountain Time is observed in nearly the entire division, except Nevada (all but the stateline city of West Wendover) and the Idaho panhandle. Daylight saving time is not observed in Arizona, except for lands within the Navajo Nation (Northeast corner of the state) which observe daylight saving time due to the Nation traversing state lines. For this reason, most of Arizona is one hour behind the rest of the Mountain Time Zone from the second Sunday in March until the first Sunday in November.[1]

Phoenix is the largest city and metropolitan area of the Mountain States, followed by Denver and Las Vegas. 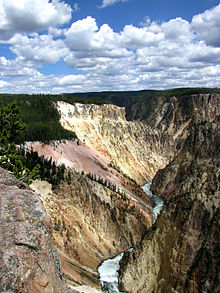 The Grand Canyon of the Yellowstone in Wyoming. 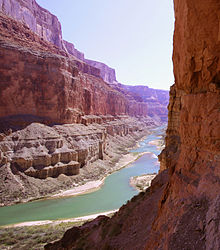 The bottom of the Grand Canyon of the Colorado River in Arizona.

The terrain of the Mountain West is more diverse than any other region in the United States. Its physical geography range from the highest mountain peaks in the United States, to large desert lands, and flat rolling plains in the eastern portion of the region. The mountain west states contain all of the major deserts found in North America. The Great Basin Desert is located in most all of the Nevada, Western Utah, Southern Idaho, and Southern Oregon. Wyoming also has a vast amount of desert land in the southwestern portion of their state, which is known as the Red Desert. The Mojave Desert is mainly located in California, but over half of the desert is located in southern Nevada, in the mountain west. Meanwhile, the Sonoran Desert is located in most all of Arizona and the Chihuahuan Desert is also located in most of Southwestern and Southern New Mexico.

In the far eastern portions of the Mountain West, there are the High Plains area of the Great Plains. These plains mainly consist of flat rolling land, with some Butte's and scattered forests located in these areas. Even though these plains areas are part of the Great Plains, they are not part of the same region. Reasons for this is that the High Plains receive very little rainfall and sit at high elevations usually about 3,000 feet. Many people view the High Plains as the point where you begin to enter the greater Mountain West region.[4] 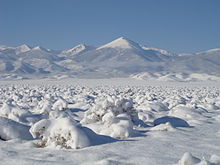 Snow on the Great Basin Desert of Nevada. 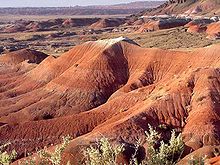 The Painted Desert in northeastern Arizona.

The climate of the Mountain West is also one of the more diverse climates in the United States. The entire region generally features a semi-arid to arid climate, with some alpine climates in the mountains of each state. Some parts of the tall mountains can receive very large amounts of snow and rain, while other parts of the region receive very little rain and virtually no snow at all. The High Plains in the eastern portion of the region receive moderate snow falls, but virtually very little rain at all.

The states of Nevada and Arizona are generally filled with desert lands and scattered mountain ranges. Much of Nevada receives little to no snow in the southern portion of the state, while Northern Nevada can receive large amounts of snow in and around the mountains, and even in the desert lands in Nevada. Arizona generally receives little rain or snow, but high elevations in and near mountains receive extremely large amounts of rain and snow. Northern and Northeastern Arizona display characteristics of a "High Desert", where the summers are very hot and dry, while the winters can become very cold and it can snow as well.

The Northern portion of the Mountain West tends to be a bit cooler than the southwestern areas. Wyoming, Idaho, and Montana all receive significant snow falls off the mountains and very large snow falls in the mountains as well. The High Desert also exists in the northern mountain west. Southeastern Oregon, southern Idaho, and southwestern Wyoming have the Great Basin Desert lands located in them, which is part of the high desert.[6] 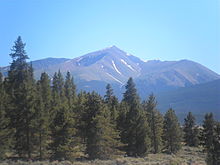 Mount Elbert in the Sawatch Range of Colorado is the highest peak of the Rocky Mountains and the Mountain States. 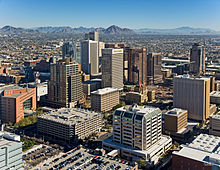 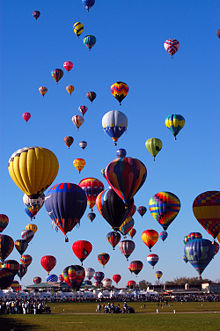 The skyline of Salt Lake City. 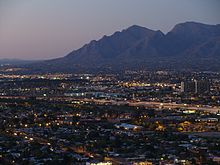 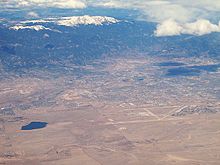 An aerial view of Colorado Springs with snow covered Pikes Peak in background.

The Idaho State Capitol in Boise.