Obesity in the United States

Obesity in the United States 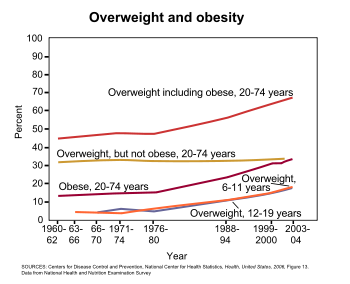 The direct medical cost of obesity and indirect economic loss to obesity has been estimated to be as high as $51.64 billion and $99.2 billion in 1995, respectively;[6] this rose to $61 billion and $117 billion in 2000.[7] Researchers for the Centers for Disease Control and Prevention and RTI International estimate that in 2003, obesity-attributable medical expenditures reached $75 billion.[8]

Obesity rates have increased for all population groups in the United States over the last several decades.[10] Between 1986 and 2000, the prevalence of severe obesity (BMI ≥ 40 kg/m2) quadrupled from one in two hundred Americans to one in fifty. Extreme obesity (BMI ≥ 50 kg/m2) in adults increased by a factor of five, from one in two thousand to one in four hundred. There have been similar increases seen in children and adolescents, with the prevalence of overweight in pediatric age groups nearly tripling over the same period. Approximately nine million children over six years of age are considered obese. Several recent studies have shown that the rise in obesity in the US is slowing, possibly explained by saturation of health-oriented media or a biological limit on obesity.[11]

Some newborns may be born big but this is more often a problem associated with a medical disorder. Unlike adults, newborns do not develop obesity. The number one cause of big babies is diabetes but this is not considered to be an obese baby.

In summary, between 2003 and 2006, 11.3% of children and adolescents were obese and 16.3% were overweight. A slight increase was observed in 2007 and 2008 when the recorded data shows that 11.9% of the children between 6 and 19 years old were obese and 16.9% were overweight. The data recorded in the first survey was obtained by measuring 8,165 children over four years and the second was obtained by measuring 3,281 children.

Although obesity is reported in the elderly, the numbers are still significantly lower than the levels seen in the young adult population. It is speculated that socioeconomic factors may play a role in this age group when it comes to developing obesity.[18]

An estimated sixteen percent of active duty U.S. military personnel were obese in 2004, with the cost of remedial bariatric surgery for the military reaching $15 million in 2002. Obesity is currently the largest single cause for the discharge of uniformed personnel.[19]

Care should be taken in interpreting these numbers, because they are based on self-report surveys which asked individuals (or, in case of children & adolescents, their parents) to report their height and weight. Height is commonly overreported and weight underreported, sometimes resulting in significantly lower estimates. One study estimated the difference between actual and self-reported obesity as 7% among males and 13% among females as of 2002, with the tendency to increase.[24]

Looking at the long-term consequences, overweight adolescents have a 70 percent chance of becoming overweight or obese adults, which increases to 80 percent if one or more parent is overweight or obese. In 2000, the total cost of obesity for children and adults in the United States was estimated to be $117 billion ($61 billion in direct medical costs).

There has been an increase in obesity-related medical problems, including type II diabetes, hypertension, cardiovascular disease, and disability.[27] In particular, diabetes has become the seventh leading cause of death in the United States,[28] with the U.S. Department of Health and Human Services estimating in 2008 that fifty-seven million adults aged twenty and older were pre-diabetic, 23.6 million diabetic, with 90–95% of the latter being type 2-diabetic.[29] Obesity has also been shown to increase the prevalence of complications during pregnancy and childbirth. Babies born to obese women are almost three times as likely to die within one month of birth and almost twice as likely to be stillborn than babies born to women of normal weight.[30]

Obesity has been cited as a contributing factor to approximately 100,000–400,000 deaths in the United States per year[10] and has increased health care use and expenditures,[27][31][32][33] costing society an estimated $117 billion in direct (preventive, diagnostic, and treatment services related to weight) and indirect (absenteeism, loss of future earnings due to premature death) costs.[34] This exceeds health-care costs associated with smoking or problem drinking[33] and accounts for 6% to 12% of national health care expenditures in the United States.[35]

The Medicare and Medicaid programs bear about half of this cost.[33] Annual hospital costs for treating obesity-related diseases in children rose threefold, from $35 million to $127 million, in the period from 1979 to 1999,[36] and the inpatient and ambulatory healthcare costs increased drastically by $395 per person per year.[32] These trends in healthcare costs associated with pediatric obesity and its comorbidities are staggering, urging the surgeon general to predict that preventable morbidity and mortality associated with obesity may surpass those associated with cigarette smoking.[31][37] Furthermore, the probability of childhood obesity persisting into adulthood is estimated to increase from approximately twenty percent at four years of age to approximately eighty percent by adolescence,[38] and it is likely that these obesity comorbidities will persist into adulthood.[39]

Under pressure from parents and anti-obesity advocates, many school districts moved to ban sodas, junk foods, and candy from vending machines and cafeterias.[40] State legislators in California, for example, passed laws banning the sale of machine-dispensed snacks and drinks in elementary schools in 2003, despite objections by the California-Nevada Soft Drink Association. The state followed more recently with legislation to prohibit their soda sales in high schools starting July 1, 2009, with the shortfall in school revenue to be compensated by an increase in funding for school lunch programs.[41] A similar law passed by the Connecticut General Assembly in June 2005 was vetoed by governor Jodi Rell, who stated the legislation "undermines the control and responsibility of parents with school-aged children."[42]

In mid-2006, the American Beverage Association (including Cadbury Schweppes, Coca Cola and PepsiCo) agreed to a voluntary ban on the sale of all high-calorie drinks and all beverages in containers larger than 8, 10 and 12 ounces in elementary, middle and high schools, respectively.[43][44]

Non-profit organizations such as HealthCorps work to educate people on healthy eating and advocate for healthy food choices in an effort to combat obesity.[45]

The American First Lady Michelle Obama is leading an initiative to combat childhood obesity entitled "Let's Move". Mrs. Obama says she aims to wipe out obesity "in a generation". Let's Move! has partnered with other programs.[46]