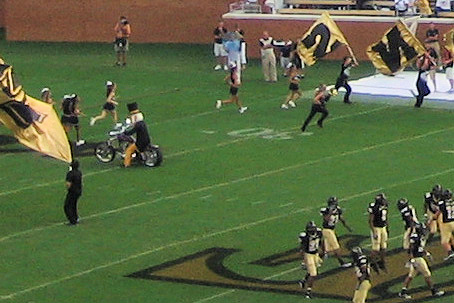 The Wake Forest Demon Deacons football team represents in the NCAA Division I Football Bowl Subdivision as a member of the . Wake Forest was ranked in the Top 25 in the nation by the during most of the 2006 season. Wake Forest won the 2006 ACC Atlantic Division Title and the 2006 ACC Conference Championship by defeating Georgia Tech 9-6 on in the ACC Championship Game in Jacksonville, FL. The win sent Wake Forest to the Orange Bowl to play Big East champion Louisville, where they lost to the Cardinals. This made Wake Forest the smallest school to ever compete in the . Of all schools that play Division I FBS football, only Rice and Tulsa have smaller undergraduate enrollments, and Wake Forest has the smallest undergraduate enrollment of any school in the s. For his part in the record-setting season, coach was unanimously selected ACC Coach of the Year, and handily won the AP Coach of the Year award several weeks later. Wake Forest plays its home football games in .

Like many other collegiate school colors and mascots, Wake Forest's traditional "Old Gold & Black" and "Demon Deacon" have distinctive, yet somewhat debated, origins.

As early as 1895, Wake Forest College was using its colors in athletic competition. The school's literary magazine, "The Wake Forest Student," described them in this manner:

:"At last, Wake Forest has a college badge. It is a very neat button designed by Mr. John M. Heck and contains a tiger's head over the letters WFC. The colors are in old gold and black." [http://wakeforestsports.collegesports.com/trads/wake-trads-spirit.html]

As the 20th century opened, those colors became frequently associated with the college, particularly its athletic and debate teams. Most historians believe that their adoption comes from the connection with the tiger mascot, and not, as some have proposed, from any association with the Bible.

Sadly, Heck, who is credited by the magazine with the creation of the tiger/old gold and black badge, died of typhoid fever at the age of 19 -- just one year after making a contribution to Wake Forest history that has lasted now for nearly 100 years.

The tiger mascot, however, remained with the school for just more than two decades. Reports indicate that by the early 1920s, the college's nicknames were most commonly noted as the "Baptists," or simply "The Old Gold & Black."

Those were difficult times for the Wake Forest athletic squads. But a gentleman by the name of Hank Garrity took over as head football and basketball coach in 1923 and for a brief period reversed those fortunes. Garrity led the football team, which had never had a winning record in the 1900s, to three straight winning seasons. And in two seasons on the hardwood, his clubs compiled a 33-14 mark.

The current nicknames of the time were not descriptive enough of this new-found athletic spirit, school newspaper editor Mayon Parker ('24) felt. After Wake Forest defeated rival Trinity (now Duke) in Garrity's first football season (1923), Parker first referred to the team as "Demon Deacons," in recognition of what he termed their "devilish" play and fighting spirit.

Wake Forest's news director Henry Belk and Garrity liked the title and began using it extensively. The name has, of course, remained as one of the most unusual in America.

Wake Forest has played in eight bowls in its history and owns a 5-3 record in those games. For the 2006-07 season, the school earned a bid to its first ever BCS game, with an Orange Bowl match-up against Louisville.

*ACC Player of the Year

*ACC Rookie of the Year

* - Current Republican Governor of .
* - Still owns several NCAA passing records
* - Former , basis for the movie ""
* - Former , holds NFL record for most receptions in a game by a running back (3rd most receptions in a game among all players), and was the first undrafted rookie to rush for over 500 yards in a rookie season; currently serves as Assistant Executive Director of the NFL Players Association.
* - Former who won rings with St. Louis and Indianapolis.
* - Former , owns school career passing yards record.