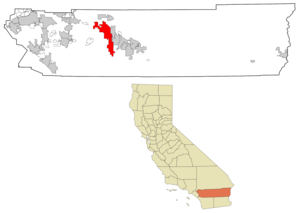 Palm Springs is a desert city in Riverside County, , approximately 111 miles (177 km) east of Los Angeles and 136 miles (225 km) northeast of San Diego. As of the 2000 census, the city population was 42,807. Golf, swimming, tennis, horseback riding and hiking in the nearby desert and mountain areas are other major forms of recreation in Palm Springs. It is one of nine adjacent cities that make up the (Palm Springs area). The for Palm Springs is 760. The s for Palm Springs are 92262 through 92264.

Palm Springs is sheltered by the to the north, the Santa Rosa Mountains to the south, and the San Jacinto Mountains to the west. This geography gives Palm Springs its hot, dry climate, with 354 days of sunshine and less than convert|6|in|mm of rain annually. Winter temperatures average in the 70s with nights in the low-to-mid 40s, but the dry desert heat of summer pushes daytime temperatures well above 100, with overnight temperatures in the mid-to-upper 70s.

16.3% of households had children under the age of 18 living with them, 34.0% were married couples living together, 8.5% had a female householder with no husband present, and 53.9% were non-families. 41.6% of all households were made up of individuals and 18.3% had someone living alone who was 65 years of age or older. The average household size was 2.05 and the average family size was 2.88.

The band of Indians is composed of several small groups of Indians who were living in the modern day Palm Springs area when the Agua Caliente Reservation was established by the United States Government in 1896. Archaeological research has shown that the have lived in the area for the past 350-500 years. The reservation occupies 32,000 acres (130 km²), of which 6,700 acres (27 km²) lie within the city limits, making the Agua Caliente band the city's largest landowner. The reservation land was originally composed of alternating squares of land laid out across the desert in a checkerboard pattern. The alternating, non-reservation squares, were provided by the United States Government to the as an incentive to bring rail lines through the open desert. Tribal enrollment is currently estimated at between 296 and 365 people. The name for the area was "Se-Khi" (boiling water). In the early 1800s, Spanish explorers named the area "Agua Caliente" (hot water). An alternative use of palm is revealed in the November 1992 issue of "Art of California". At least one Spanish explorer referred to the area as "la Palma de la Mano de dios" or "The Palm of God's hand," (page 45). The current name for the area is "Palm Springs" which likely came into common usage in the mid-1860s when the land was first surveyed by U.S. Government surveyors who noted that a local mineral spring was located at the base of “two bunches of palms". By 1884 when San Francisco attorney John Guthrie McCallum settled in Palm Springs, the name was already in wide acceptance.

As the 1970s drew to a close, increasing numbers of retirees moved to the Coachella Valley. As a result, Palm Springs began to evolve from a virtual ghost town in the summer to a year-round community. Businesses and hotels that used to shutter for the months of July and August instead remained open all summer. As commerce grew, so too did the number of families with children.

Palm Springs is noted for its architecture, a tradition that grew out of the aesthetics of the world-renowned German and is reflected in the work of (who designed the Palm Springs city hall, tram station, Movie Colony Hotel and airport), Donald Wexler, , E. Stewart Williams, and other world-famous architects.

A home developer, Alexander Homes, popularized this post-and-beam architectural style in the Coachella Valley. Alexander houses and similar homes feature low-pitched roofs, wide eaves, open-beamed ceilings, and floor-to-ceiling windows. Restoration projects are now being undertaken all over the city to return these homes and businesses to their original condition. Students of mid-century architecture and design come to the city to study its heritage in this unusual style of the decorative arts.

Though celebrities still retreat to Palm Springs, many today establish residences in other areas of the . The city's economy now relies on , which occurs primarily during the winter months, and casino gambling. It is a city of numerous festivals, conventions, and international events.

The world's largest rotating tramcars can be found at the . These cars ascend two-and-a-half miles up a steep incline to reveal views of the entire Coachella Valley. The ascent from the desert floor to an altitude in excess of convert|8500|ft|m is accompanied by a drop in temperature of 30 degrees or more, giving riders a cool respite from the heat on a hot summer day. A wilderness area can be explored at the top of the tram and there is a restaurant with spectacular views.

The Palm Springs Art Museum presents traveling art exhibitions plus a variety of entertainment in its Annenberg Theater. The is located downtown with the Spa Resort Hotel and Casino. There are other casinos in the Coachella Valley as well, notably in the cities of Rancho Mirage, Indio, Coachella and Cabazon.

Numerous five star hotels, restaurants and attractions cater to tourists, while shoppers can find high-end boutiques in downtown and uptown Palm Springs. There is a water park and several skateboard parks. Last, but not least, there are hundreds of diverse restaurants throughout the city.

The City of Palm Springs is a charter city, with a charter adopted by the voters in 1994. It consists of a , with a five-person city council that hires a and city attorney. The mayor is directly elected and serves a four-year term. The other four council members also serve four-year terms, with staggered elections. The City is considered a full-service city, in that it staffs and manages its own police and fire departments including a jail, parks and recreation programs, public library, sewer system and wastewater treatment plant, international airport, and planning and building services. The city council also serves as the Community Redevelopment Agency, the Housing Authority, and the Financing Authority.

The current mayor is Steve Pougnet, but the best-known mayor in the city's history was .

Raymond Cree Middle School is located in Palm Springs and is the smallest middle school in the Palm Springs Unified School District. Raymond Cree [http://www.psusd.com/schools/raymondcree.html] serves approximately 1,000 students in grades six through eight. Public school (kindergarten through twelfth grade) enrollment within Palm Springs itself has steadily declined since the early 1990s, due to an exodus of families from the city and the resulting demographic changes.

The Desert Community College District, headquartered in Palm Desert with its main campus, located there. and used to have satellite campuses available within the College of the Desert campus, but now have their own buildings a few miles away.

The Palm Springs area features a number of sporting events including the , one of the most significant tennis events in the world, after the four Grand Slam tournaments; the , the , and dozens of boxing events held throughout the valley. Palm Springs has also hosted the Easter Bowl, the national junior tennis championships, where America's top juniors in the nation go and compete for a grand prize, and several NCAA golf tournaments.

Palm Springs is the 144th largest TV market as defined by . The Palm Springs DMA is unique among TV markets as it is entirely located within only a small portion of Riverside County. The remainder of that county is located within the Los Angeles DMA. Also, while most areas received their first local television stations during the 1950s, Palm Springs did not receive its first TV stations until October, 1968 when stations KPLM-TV (now KESQ) and KMIR-TV debuted almost simultaneously about three weeks apart. Prior to that time, Palm Springs was served by TV stations from the Los Angeles market, which were carried on the local cable system that has been in operation since the 1950s and predated the emergence of local broadcast stations by more than a decade.

, , , and other networks are covered by low power TV stations in the market.

is the local daily newspaper serving Palm Springs and the Coachella Valley region.