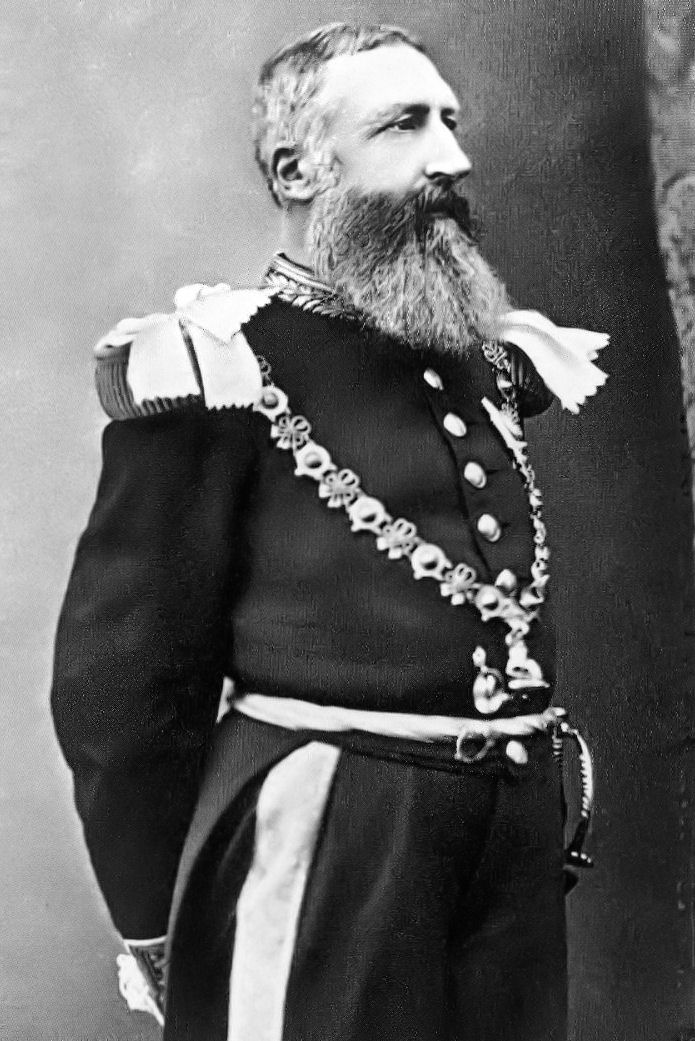 Leopold II ( _fr. Léopold Louis Philippe Marie Victor, _nl. Leopold Lodewijk Filips Maria Victor) (9 April 1835 – 17 December 1909) was . Born in the second (but eldest surviving) son of Leopold I, he succeeded his father to the throne in 1865 and remained king until his death. He was the brother of Empress Carlota of Mexico and first cousin to .

The regime of the Leopold's n colony, the , became one of the more infamous international scandals of the turn of the century. The famous 1904 report by the British Consul led to the arrest and punishment of white officials who had been responsible for cold-blooded killings during a rubber-collecting expedition in 1903 (including one national for causing the shooting of at least 122 people).

Outside , he is chiefly remembered as the founder and sole owner of the , a private project undertaken by the King. The state included the entire area now known as the . He ran the Congo as his personal fiefdom; for him it was a business venture. A friend of , he used Stanley to help him lay claim to the territory he called Congo. Leopold thought of himself as an astute businessman and he once spent a week in Seville studying Spanish records of their trade with their colonies.

Leopold II was also the father of two sons, Lucien Philippe Marie Antoine (9 February 1906–1984) and Philippe Henri Marie François (16 October 1907–21 August 1914), born out of wedlock. Their mother was (12 May 1883 – 12 February 1948 ), aka Caroline Lacroix, a who married the King on 12 December/14 December 1909, in a religious ceremony with no validity under Belgian law, at the Pavilion of Palms, , in , five days before his death, in a religious ceremony "" (on his deathbed) by the Priest of Laeken Cooreman. [http://pages.prodigy.net/ptheroff/gotha/belgium.html] ["Le Petit Gotha"] These sons were adopted in 1910 by Lacroix's second husband, Antoine Durrieux. Though Lacroix is said to have been unofficially created Baroness de Vaughan in Belgium (a courtesy title), Lucien the Duke of Tervuren, and Philippe the Count of Ravenstein, ["Le Petit Gotha"] no such royal decrees were ever issued.Fact|date=February 2007

The "Belgian King" is reported as being a client of Mary Jeffries's "Rose Cottage" flagellation house and brothel in , a suburb of . ["In London: The Wicked City", Fergus Linnane (Robson Books 2003) pp. 297–8.]

On 15 November 1902, Italian attempted to assassinate Leopold, who was riding in a royal cortege from a ceremony in memory of his recently-deceased wife, Marie Henriette. After Leopold's carriage passed, Rubino fired three shots at the King; the shots missed Leopold and Rubino was immediately arrested.

In Belgian domestic politics, Leopold emphasized military defense as the basis of neutrality, but he was unable to obtain a universal conscription law until on his death bed. He died in on 17 December 1909, and was interred in the royal vault at the Church of Our Lady, Laeken Cemetery, Brussels.

He was succeeded as King of the Belgians by his nephew Albert, son of his brother Philippe.

Leopold fervently believed that overseas colonies were the key to a country's greatness, and he worked tirelessly to acquire colonial territory for Belgium. Neither the nor the were interested, however, and Leopold eventually began trying to acquire a colony in his private capacity as an ordinary citizen. The Belgian government loaned him money for this venture.

After a number of unsuccessful schemes for colonies in Africa or Asia, in 1876 he organized a private disguised as an international scientific and philanthropic association, which he called the International African Society.

In 1876, under the auspices of the holding company, he hired the famous explorer to establish a colony in the Congo region. Much diplomatic maneuvering resulted in the of 1884&ndash;85, at which representatives of fourteen European countries and the recognized Leopold as sovereign of most of the area he and Stanley had laid claim to. On 5 February 1885, the result was the (later the , then the , then , and now the Democratic Republic of Congo or DRC again, not to be confused with ), an area 76 times larger than Belgium, which Leopold was free to rule as a personal domain through his , the .

was extorted from the natives. The abuses were particularly bad in the industry, including enslavement and of the native population. Missionary John Harris of Baringa, for example, was so shocked by what he had come across that he felt moved to write a letter to Leopold's chief agent in the Congo: "I have just returned from a journey inland to the village of Insongo Mboyo. The abject misery and utter abandon is positively indescribable. I was so moved, Your Excellency, by the people's stories that I took the liberty of promising them that in future you will only kill them for crimes they commit."

Estimates of the death toll range from two to fifteen million, although most sources indicate it was around ten million. [ "A Sign For Cain : A Exploration of Human Violence" (1966), "King Leopold's Ghost: A Story of Greed, Terror, and Heroism in Colonial Africa" (1998; new edition, 2006)] [cite web | url = http://users.erols.com/mwhite28/warstat2.htm | title = War statistics] Determining how many people died is difficult as accurate records were not kept. and sleeping sickness decimated the population. [ [http://www.flwi.ugent.be/btng-rbhc/pdf/BTNG-RBHC,%2036,%202006,%203-4,%20pp%20323-372.pdf The 'Leopold II' concession system exported to French Congo with as example the Mpoko Company] ] By 1896 the had killed up to 5,000 Africans in the village of Lukolela on the . The mortality figures were gained through the efforts of Roger Casement, who found only 600 survivors of the disease in Lukolela in 1903. [cite web | url = http://www.urome.be/fr2/reflexions/casemrepo.pdf | format = PDF | title = Reflections]

The Belgian historian , whose works are cited in the sources of "King Leopold's Ghost", claimed in a newspaper article that Hochschild's moral judgements are "not justified in respect at the time and place" and that his conclusions about the scale of the mass murder are based on incomplete statistics. He advanced the suspicion that in Hochschild's book historical objectivity was affected by the desire to attract the attention of the public.

Reports of outrageous exploitation and widespread abuses led to an international protest movement in the early 1900s. The campaign to report on Leopold's "secret society of murderers," led by British diplomat , and former shipping clerk , became the first mass movement. [cite web | url = http://news.bbc.co.uk/2/hi/africa/3516965.stm | publisher = BBC | work = News | title = Africa] Supporters included American humorist , who wrote a stinging entitled "", in which the King supposedly argues that bringing Christianity to the country outweighs a little starvation. Leopold's rubber gatherers were tortured, maimed and slaughtered until the turn of the century, when the conscience of the forced to call a halt. [cite web | url = http://www.time.com/time/magazine/article/0,9171,866343-2,00.html | title = Time] It should be noted that, as describes in "", France, Germany and Portugal were quick to adopt the Congolese methods in those parts of their colonies where natural rubber occurred, imposing a similar death toll on the natives.

Finally, in 1908, the Belgian parliament compelled the King to cede the Congo Free State to Belgium. Historians of the period tend to take a very dim view of Leopold, due to the mass killings and human rights abuses that took place in the Congo: one British historian has said that he "was an in modern dress, and it would have been better for the world if he had never been born". [cite web | url = http://web.jjay.cuny.edu/~jobrien/reference/ob73.html | title = CUNY] Emperor Franz Joseph of once described his fellow ruler as a "thoroughly bad man".

Leopold II is still a controversial figure in the ; in 2005 his statue was taken down just hours after it was re-erected in the capital, . The Congolese culture minister, Christoph Muzungu, decided to reinstate the statue, arguing people should see the positive aspects of the king as well as the negative. But just hours after the six-metre (20 ft) statue was erected in the middle of a roundabout near Kinshasa's central station, it was taken down again, without explanation.

Leopold and the Belgians

Though extremely disliked by his subjects at end of his reign — he was booed during his burial parade — Leopold II is remembered today by many Belgians as the "Builder King" ("Koning-Bouwer" in Dutch, "le Roi-Bâtisseur" in French) because he commissioned a great number of buildings and urban projects, mainly in , and .

These buildings include the Royal Glasshouses in the grounds of the Palace at , the Japanese Tower, the Chinese Pavilion, the "Musée du Congo" (now called the ), and their surrounding park in , the "" in Brussels, and the Antwerp train station hall. He also built an important in on the , including the "Villa des Cèdres", which is now a . These were all built using the profits from the Congo. In 1900, he created the Royal Trust, by which means he donated most of his property to the Belgian nation.

There was a "Great Forgetting", as puts it in "", after the King transferred his private colony to Belgium. Hochschild records that, on his visit to the colonial Royal Museum for Central Africa in the 1990s, it did not mention anything at all regarding the atrocities committed in the Congo Free State. It holds a large collection of colonial objects but of the largest injustice in Congo, "there is no sign whatsoever". Another example is to be found on the sea walk of , a popular coastal resort, where a monument shows a colonialist supposedly bringing "civilisation" to the black child at his feet, further illustrating this "Great Forgetting".Infobox Monarch styles
royal name = King Leopold II of the Belgians

* Leopold II was selected as a main motif for the recent 12.50 euro Leopold II commemorative coin minted in 2007. The obverse shows his portrait facing left.
*
*
*