Albert I of Belgium

Albert I of Belgium 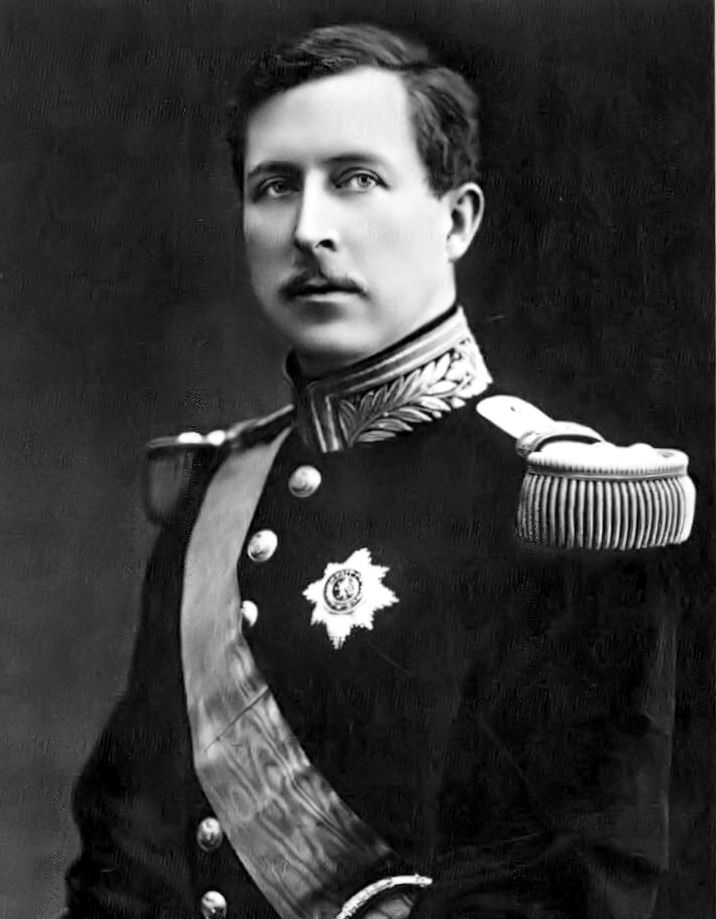 Born Albert Léopold Clément Marie Meinrad (in German Albert Leopold Clemens Marie Meinrad) in , he was the fifth child and second son of , and his wife, Princess Marie of Hohenzollern-Sigmaringen. Prince Philippe was the second son of Leopold I, the first King of the Belgians, and his wife, Marie Louise of Orléans, and the younger brother of King Leopold II of the Belgians. Princess Marie was a relative of Kaiser Wilhelm II, and a member of the non-reigning, Catholic branch of the Hohenzollern family. Albert grew up in the Palace of Flanders, initially as fourth in the line of succession to the Belgian throne. When, however, the only son of his uncle, Leopold II, died as a child, and Albert's older brother, Prince Baudouin of Belgium, who had been subsequently prepared for the throne, also died young, Albert, at the age of 16, unexpectedly became the Heir-Presumptive to the Belgian Crown. Retiring and studious, Albert prepared himself conscientiously for the task of kingship. Like his deceased older brother, Baudouin, Albert knew the Flemish and Walloon dialects of Belgium and enjoyed expressing himself in local idioms. In his youth, Albert was seriously concerned with the situation of the working classes in Belgium, and personally traveled around working class districts incognito, to observe the living conditions of the people (Bronne). Shortly before his accession to the throne in 1909, Albert undertook an extensive tour of the Belgian Congo, which had been annexed by Belgium in 1906, finding the area oppressively administered and in very poor condition. Upon his return to Belgium, he recommended reforms to protect the native population and to further technological progress in the colony (Graham).

Albert was married in on 2 October 1900 to Duchess Elisabeth Gabrielle Valérie Marie in Bavaria, a princess whom he had met at a family funeral. A daughter of , and his wife, the Infanta , she was born at , , , on 25 July 1876, and died on 23 November 1965. Albert had told Elisabeth following their engagement: "You will always be able to count on my infinite love, and my absolute loyalty," and Elisabeth, who, the first time she had seen Albert, had confided to her aunt, the Queen of Naples: "I will marry no one but him," assured Albert with great affection: "You deserve to have a wife who lives for you, which is what I will try to do all my life." Albert and Elisabeth were, indeed, a deeply devoted couple, as proven by numerous letters written during their engagement and marriage. These letters are extensively cited in the memoirs of their daughter, Marie-José, "Albert et Elisabeth de Belgique, mes parents", and reveal a profound, intense love based on a rare affinity of spirit (Regolo). They also make clear that Albert and Elisabeth continually supported and encouraged each other in their challenging and difficult roles as King and Queen. According to Marie-José, Albert and Elisabeth were so closely united that their characters appeared to be merged into one, enabling them to endure "great trials." It was rare, in Marie-José's opinion, to see two people collaborating so felicitously for the good of their country, and, even, "if one may say so, for that of mankind." The spouses shared an intense commitment to the good of their country and their family and a keen interest in human progress of all kinds. They were both great intellectuals who cultivated the friendship of prominent scientists, artists, mathematicians, musicians, and philosophers, turning their court at Laeken into a kind of cultural salon (Regolo).

Albert and Elisabeth had three children:
* Léopold Philippe Charles Albert Meinrad Hubertus Marie Miguel, , Prince of Belgium, who became later the fourth king of the Belgians as Leopold III, born 3 November 1901, and died at on 25 September 1983.

*Marie-José Charlotte Sophie Amélie Henriette Gabrielle, Princess of Belgium, born 4 August 1906. She was married at , on 8 January 1930 to Prince Umberto Nicola Tommaso Giovanni Maria, Prince of Piemonte, who was born on 15 September 1904, and who died on 18 March 1983 at , . He became King Umberto II of on 9 May 1946. Marie-Jose died 27 January 2001.Albert and Elisabeth raised their children in a tender and intellectually stimulating environment, while seeking to inculcate in them a rigorous morality and a high sense of duty to their country. Albert was very close to his eldest son and heir, Prince Leopold (Keyes), and to his daughter, Marie-José (Regolo).

Albert succeeded to the Belgian throne in December, 1909. Previous Belgian kings had taken the royal accession oath only in French; Albert innovated by taking it in Flemish as well (Bronne). He and his wife, Queen Elisabeth, were very popular in Belgium due to their simple, unassuming lifestyle and strong family life. An important aspect of the early years of Albert's reign was his institution of many reforms in the administration of the Belgian Congo, Belgium's only colonial possession (Keyes).

King Albert was a very devout Catholic. There are many stories which illustrate his deep and tender piety, based on a critical conscience and related to his ideals of courage and love of the other (Regolo). For instance, when his former tutor, General De Grunne, entered the Benedictine monastery of Maredsous, Belgium, in his old age, King Albert wrote a letter to him, in which he spoke of the joy of giving oneself to God (d'Ydewalle). He said: "May you spend many years at Maredsous in the supreme comfort of soul that is given, to souls touched by grace, by faith in God's infinite power and confidence in His goodness"( Gérard). To another friend, a Chinese diplomat, who became a Catholic monk, Albert wrote: "Consecrating oneself wholly to Our Lord gives, to souls touched by grace, the peace of soul which is the supreme happiness here below" (Gérard.) In his daughter Marie-José's words, Albert had "an innate sense of the religious and the transcendent" (Regolo). He used to tell his children: "As you nourish your body, so you should nourish your soul" (Regolo). In an interesting meditation on what he viewed as the harm which would result if Christian ideals were abandoned in Belgium , he said : "Every time society has distanced itself from the Gospel, which preached humility, fraternity, and peace, the people have been unhappy, because the pagan civilization of ancient Rome, which they wanted to replace it with, is based only on pride and the abuse of force" ( Commemorative speech for the war dead of the Battle of the Yser, given by Dom Marie-Albert, Abbot of Orval, Belgium, in 1936 ). It is strange that, despite the profound Catholic faith of King Albert ( and, for that matter, that of his son, King Leopold III of the Belgians, who tried to emulate his father in all respects ), the Belgian dynasty is all too often portrayed as lacking in religious fervor until Albert's grandson King Baudouin I.

At the beginning of , Albert resisted the illegal German demand to move troops through neutral Belgium in order to attack France. The refusal to permit the passage of troops was based on a respect for international law, and a concern for the balance of power in Europe, which, at the time, required that Belgium be a neutral buffer zone between Germany, France, and Great Britain ( Bronne, Graham, Keyes, Thielemans ). By defending the balance of power, King Albert also protected the interests of Belgium, since a small nation could easily fall prey to whichever great power became too strong ( Thielemans ). Albert famously responded to the German desire to move soldiers through his country: "I rule a nation, not a road!" When Germany subsequently invaded Belgium, King Albert, as prescribed by the Belgian constitution, took personal command of the Belgian army, and held the Germans off long enough for Britain and to prepare for the Battle of the Marne (6 - 9 September 1914). He led his army through the and the Battle of the Yser, when the Belgian army was driven back to a last, tiny strip of Belgian territory, near the North Sea. Here the Belgians, in collaboration with the armies of the Entente, took up a war of position, in the trenches behind the River Yser, remaining there for the next four years. During this period, King Albert fought with his troops and shared their dangers, while his wife, Queen Elisabeth, worked tirelessly as a nurse at the front. The King also allowed his 13-year-old son, Prince Leopold, to enlist in the Belgian army as a private and fight in the ranks ( Graham ). The war inflicted terrible suffering on Belgium, which was subjected to a harsh German occupation. The King, fearing the destructive results of the war for Belgium and Europe, and appalled by the huge casualty rates, worked through secret diplomatic channels for a negotiated peace between Germany and the Entente based on the "no victors, no vanquished" concept. He considered that such a resolution to the conflict would best protect the interests of Belgium and the future peace and stability of Europe. Since, however, neither Germany nor the Entente were favorable to the idea, tending, instead, to demand total victory and the unconditional surrender of the enemy, Albert's attempts to further a negotiated peace were unsuccessful. In view of his disapproval of the breadth of Allied war aims, King Albert probably considered concluding a separate peace with Germany, if Belgium's independence could be assured and the the country safely extricated from the war. Germany's attitude, however, made this impossible, since Germany was using Belgium as a lever to exert pressure on the Entente, and hence was unwilling to restore its freedom ( Thielemans ). At the end of the war, as commander of the Army Group Flanders, consisting of Belgian, British and French divisions, Albert led the final offensive of the war that liberated occupied Belgium. King Albert and Queen Elisabeth then re-entered to a hero's welcome.

Upon his return to Brussels, King Albert made an important speech in which he outlined the reforms he desired to see implemented in Belgium, including universal suffrage and the establishment of a Flemish University in Ghent. In 1918, he forged a post-war "Government of National Union" made up of members of the three main parties in Belgium, the Catholics, Liberals, and Socialists. King Albert attended the Paris Peace Conference, where he defended the interests of Belgium, insisting on war reparations to enable his devastated country to be restored economically, but also opposed a policy of excessive humiliation of defeated Germany. Albert feared that such a policy would only provoke German revenge and lead to future wars in Europe. He also considered that the dethronement of the princes of Central Europe and, in particular, the dissolution of the Habsburg Empire would constitute a serious menace to peace and stability on the continent ( d'Ydewalle ). His views, however, did not prevail in the decisions of the Peace Conference. Albert spent much of the remainder of his reign assisting in the post-war reconstruction of Belgium.

A passionate alpinist, King Albert I died tragically in a mountaineering accident while climbing the Roche du Vieux Bon Dieu at , in the region of Belgium near Namur. His death shocked the world and he was deeply mourned, both in Belgium and abroad. Because King Albert was an expert climber, some questioned the official version of his death. Nonetheless, rumors of murder have been dismissed by most historians. King Albert is interred in the Royal Crypt at the Church of Our Lady, Cemetery, Brussels, Belgium. Curiously, Albert seems to have had a premonition of his death. Although he was in excellent health, he wrote in 1930: "Life is a race, fate does not wait, I'm near the end." In 1935, prominent Belgian author published a widely acclaimed biography of King Albert I, entitled "Albert of Belgium: Defender of Right." In 1993, a close climbing companion of the King, Walter Amstutz, founded the King Albert I Memorial Foundation, an association based in Switzerland and dedicated to honoring distinguished individuals in the mountaineering world.

* [http://www.king-albert-foundation.ch Information about King Albert's mountaineering feats]
* [http://www.1914-1918.be Belgium in the First World War, including stories of the royal couple, in French]