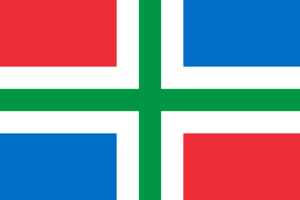 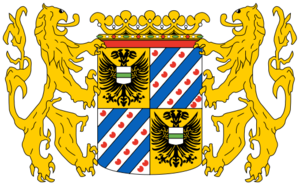 
Groningen pronunciation|000 Groningen.ogg is the northeasternmost province of the . In the east it borders the German state of Niedersachsen (districts of Leer and ), in the south , in the west and in the north the . The of the province is the city of Groningen.

Land use in Groningen is mainly agricultural, it has a large near .

Originally a part of , Groningen became a part of the around . assigned the Christianization of this new possession to . In the , the city of Groningen was a village in that belonged to the , while most of the province was in the . During the Middle Ages, central control was remote, and the city of Groningen acted as a , exerting a dominating influence on the surrounding . Around 1500, gave Groningen and Friesland to , who could however not establish permanent control. In 1514/15 Groningen came to the Duchy of , and in to the . In , Groningen was conquered by the , to which it belonged henceforth.

East Groningen was the scene of a particularly fierce in the 19th and 20th centuries. Perhaps not coincidentally, Groningen boasts the only municipality (Beerta) where the has ever had a ().

Groningen is home to a typical Low Saxon called "" ("Grönnegs" / "Grunnegs" in Gronings regional language), with local nuances. Nowadays, many inhabitants of the province do not speak the dialect, especially in the city of Groningen where many outsiders have moved.