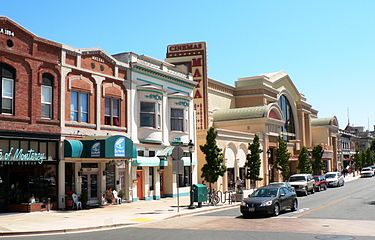 Main Street is the metonym for a generic street name (and often the official name) of the primary retail street of a village, town, or small city in many parts of the world. It is usually a focal point for shops and retailers in the central business district, and is most often used in reference to retailing and socializing.

The term is commonly used in the United States, Canada, Ireland, and some parts of Scotland. High Street is also a common term in the United Kingdom and Australia, though Main Street is used just as much (as in Upwey). In Jamaica, as well as North East England and some sections of Canada, the usual term is Front Street. In Cornwall (and also in some towns in Devon), the equivalent is Fore Street.

In some larger cities, there may be several Main Streets, each relating to a specific neighborhood or formerly separate city, rather than the city as a whole. In many larger U.S. cities "Main Street" is a U.S. Highway, as the streets that helped develop the cities around were converted to highways. 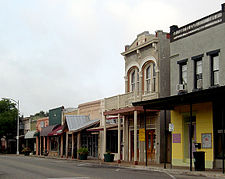 In the general sense, the term "Main Street" refers to a place of traditional values.

Main Street was an extremely popular term during the economic crises in 2008 and 2009: the proposed bailout of U.S. financial system, the 2008 presidential campaign, and debates.

"Main Street" is part of the iconography of American life. Examples include:

In small towns across the United States, Main Street is not only the major road running through town but the site of all street life, a place where townspeople hang out and watch the annual parades go by. A slang term popularized in the early 1900s, "main drag", is also used to refer to a town's main street.

Main Street Inc. is the name of a community revitalization program begun by the National Trust for Historic Preservation in the late 1970s. The core of the Main Street philosophy is the preservation of the historic built environment by engaging in historic preservation. Main Street focuses on a holistic approach to revitalization based on the 4-point approach of design, promotion, economic restructuring, and organization. Originally targeted at small, traditional downtowns, the program has expanded to include towns of various sizes, including neighborhood districts in several large urban centers. [1] 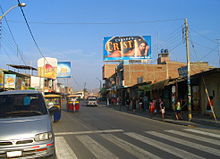 The main street in the Peruvian town of Máncora, which happens to be the Pan-American Highway. 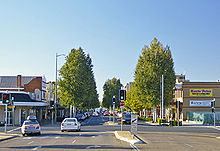 (literally, "The big street"). They are typically surrounded by stores and restaurants, and increasingly open for pedestrians only. Likewise, in Norway this type of street is called gågate (literally, "walkingstreet").