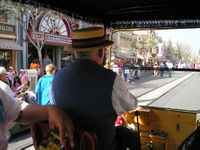 Main Street at Disneyland as seen from a Horseless Carriage.

Main Street, U.S.A. is the first "themed land" inside the main entrance of the many 'Magic Kingdom'-style parks run by The Walt Disney Company around the world.

Main Street, U.S.A. is home to City Hall, in which the Guest Relations office is located. Further along Main Street, the names painted in the windows on Main Street serve as credits for some of the many people, Imagineers and others, who contributed in some way to the creation of Disneyland. Largely they appear as fictional businesses (gyms, realtors, dentists), and they often refer to a hobby or interest that the person honored. Ub Iwerks's window, for example, refers to his prowess with cameras. For Disneyland's 50th anniversary, on July 17, 2005, a first-story window on each Main Street was unveiled with a dedication to all the cast members (employees) who had worked for Disney throughout the years. The streets are paved with resilient asphalt to prevent aching of feet.

Inspired by Walt Disney's hometown of Marceline, Missouri (as in the film Lady and the Tramp), Main Street, U.S.A. is designed to resemble the center of a turn-of-the-century (c. 1908) American town. According to Harper Goff, who worked on Main Street, U.S.A. with Walt, he showed Walt some photos of his childhood home of Fort Collins, Colorado. Walt liked the look, and so many of the features of the town were incorporated into Main Street, U.S.A.[1] 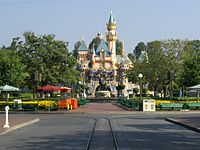 Walt Disney said, "For those of us who remember the carefree time it recreates, Main Street will bring back happy memories. For younger visitors, it is an adventure in turning back the calendar to the days of their grandfather's youth." Above the firehouse at Disneyland is Walt Disney's personal apartment, fully furnished but off-limits to the public. A lamp is kept burning in the front window as a tribute to his memory, except at Christmas where a small tannenbaum replaces the lamp. It is largely decorated for both Halloween and Christmas.

There is a 60-foot-tall (18 m) Christmas tree during Christmas Time, and there is a 16-foot-high (4.9 m) Mickey Mouse jack-o-lantern on Halloween Time, with additional pumpkin ears. In the circular hub in front of the Sleeping Beauty Castle, the bronze "Partners" statue of Walt Disney and Mickey Mouse is surrounded by smaller bronzes of familiar Disney characters, such as Donald Duck and the White Rabbit from Alice in Wonderland.

In Town Square is the oldest building in Disneyland, the Main Street Opera House. It formerly served as the park's lumber mill between 1955 and 1961. The cannons that are displayed in the center of the square had been used by the French army during the 1800s, although they had never been fired in battle. The gas lamps that line the street originally came from Baltimore and were brought for $.03 a pound.[2]

"Partners," sculpted by Blaine Gibson,[3] was added in 1993. During the Halloween season, pumpkin busts for each themed land in the park, except Main Street, are seen around "Partners." It is listed as a real street in the Orange County Thomas Guide. 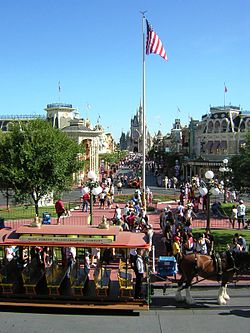 Instead of being a replica of a small Midwestern American town, Main Street at Walt Disney World features some stylistic influences from around the country, such as New England and Missouri. This is most noticeable in the "four corners" area in the middle of Main Street where each of the four corner buildings represents a different architectural style. There is also no Opera House as there is at Disneyland; instead there is the Exposition Hall. Main Street is lined with shops selling merchandise and food.

The decor is early-20th-century small-town America, inspired by Walt Disney's childhood and the film Lady and the Tramp. City Hall contains the Guest Relations lobby where cast members provide information and assistance. A real working barber shop gives haircuts for a fee. The Emporium carries a wide variety of Disney souvenirs such as plush toys, collectible pins, and Mickey-ear hats. Tony’s Town Square and the Plaza Restaurant are sit-down restaurants. Casey's Corner is at the end of Main Street and sells traditional American ball park fare including hot dogs & fries. In the distance beyond the end of Main Street stands Cinderella Castle.

Though only 189 feet (55m) tall, it benefits from a technique known as forced perspective. The second stories of all the buildings along Main Street are shorter than the first stories, and the third stories are even shorter than the second, and the top windows of the castle are much smaller than they appear. The resulting visual effect is that the buildings appear to be larger and taller than they really are. Main Street is considered the opening credits for the Magic Kingdom. You pass under the train station (the opening curtain), and then you view the opening credits on the upper stories of the main street buildings.

Each window has a business name on it, such as "Seven Summits Expeditions, Frank G. Wells President", each of these people has a connection to Disney. The windows/credits are ordered as they would be for a movie. In addition to the bronze "Partners Statue" of Walt Disney and Mickey Mouse in front of Cinderella Castle, there is also the "Sharing the Magic Statue" of Roy O. Disney sitting with Minnie Mouse near the park's entrance. Surrounding the "Partners Statue" at the central hub, are several iconic Disney characters featured throughout the park. Some of these include; Minnie, Donald, Br'er Rabbit, Goofy, Chip and Dale, etc. 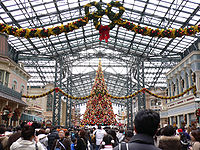 World Bazaar at Tokyo Disneyland during the Christmas Season.

World Bazaar is the alternative of Main Street, U.S.A. It is covered by a glass Victorian-style conservatory roof to shield guests from the Japanese weather. Amongst others, World Bazaar features a 1950s American diner. World Bazaar features the most eateries out of the "Main Streets", with 3 table service restaurants (4 including Club 33) There is also a larger side street called "Center Street" that runs across Main Street which exits on either side into Tomorrowland and Adventureland. This is also the only "Main Street" that does not have a train station. World Bazaar is also home to Tokyo Disneyland's Club 33.

This street is themed slightly differently from the others; the decor is more 1920s than turn-of-the-century, though the buildings are almost identical to those in Florida, with influences from the flapper and ragtime eras and an emphasis on baseball culture and the rise of the automobile. Instead of horse-drawn trolleys and Victorian vehicles, plans originally featured trams to fit with the 1920s theme, but were scrapped.

Also, due to often cold, rainy weather in the area, the Imagineers compromised and offered covered walkways on either side of Main Street called "arcades". There is the "Discovery Arcade" on the side closest to Discoveryland, and the "Liberty Arcade" on the side closest to Frontierland. These provide access to all of the shops along the length of Main Street, while giving shelter from the weather. They also provide a passageway when the street is crowded during parades and fireworks. 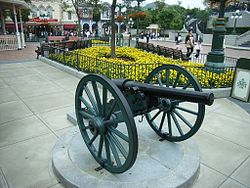 A cannon located at the Town Square of Hong Kong Disneyland 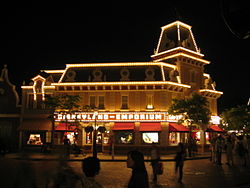 Inspired by the main street in Disneyland, the buildings of this Main Street are almost identical to those in Anaheim. Like other main streets, Hong Kong Disneyland's Main Street, U.S.A. serves as the entrance of the park. Plans originally featured a restaurant under the Hong Kong Disneyalnd Railroad station, but were scrapped due to budget reasons.

The decor is 20th century small-town America from about the years 1890-1910. Though being very similar to Anaheim's main street, the story of this street is heavily influenced by European immigrants. Plaza Inn has the same exterior design as the one in Anaheim but its theme is about a wealthy American couple who traveled to China, fell in love with its culture and cuisine and returned to create a classical Chinese eatery filled with all the decorations they collected on their journeys. The Market House Bakery was founded by a Viennese pastry chef who brought some of the world’s most famous desserts and coffee cakes from the Austrian imperial court.

Instead of using stone as the major building material like other main streets, Main Street at Hong Kong Disneyland were built mainly of wood, which is rare in Hong Kong. There are no horse-drawn streetcars nor the partners statue in this street although tracks for the streetcars can be seen from early conceptual arts.

In the video game Epic Mickey, there is an altered version of this area named Mean Street which serves as the main hub of the game.