The attraction is a stage show with audio-animatronic figures. Most of the characters are bears who perform Country music. Characters rise up to the stage on platforms, descend from the ceiling, and appear from behind curtains. The audience includes audio-animatronic animal heads mounted on the walls who interact with characters on stage.

Due to overwhelming popularity, The Country Bear Jamboree was given a "spin-off" show which appeared during the 1984 winter season at Disneyland. It was called The Country Bear Christmas Special.

In 2002, a movie titled The Country Bears was released which was based on the attraction and its characters.

The Country Bear Jamboree was originally intended by Walt to be placed at Disney's Mineral King Ski Resort which he was trying to build in the mid 1960s. Walt knew he wanted some sort of show to provide entertainment to the guests at the resort, and he knew he wanted the show to feature some sort of bear band. The project was assigned to imagineer Marc Davis.

Davis, together with Al Bertino, came up with many bear groups, including bear marching bands, bear mariachi bands, and Dixieland bears. One day Davis was working on drawings of the characters in his office. Walt Disney walked in and saw the drawings and laughed because he loved the characters. On Disney's way out he turned to Marc Davis and said good-bye, which he was known never to say. A few days later he died on December 15, 1966. It was the last time Davis saw Disney.

After his death, plans for the show still carried on. The bears would be featured in the resort's Bear Band Restaurant Show, and it was decided that they would have a country twang. But while plans for the show progressed, plans for the ski resort did not. Instead, the Imagineers working on the project decided to place the show in Walt Disney World's Magic Kingdom in time for its grand opening in 1971. Imagineer X Atencio and musical director George Bruns created songs for the bears to sing.

On October 1, 1971, The Country Bear Jamboree opened its doors in the Magic Kingdom at Walt Disney World. It received so much good feedback that Imagineers immediately planned to make a replica of the show to be placed in Disneyland. The addition to the show in Disneyland inspired a brand new land appropriately titled Bear Country. Because of the tremendous popularity of the show in Walt Disney World, excess capacity was added to the March 4, 1972, Disneyland incarnation in the form of two identical theaters, each housing a copy of the show in its entirety.

In 1986, the Vacation Hoedown debuted at both Disneyland and the Magic Kingdom. During the holiday season, the bears still performed their Christmas Show in Florida through 2005. Attendance struggled during the Vacation Hoedown's run in Florida, so for the Kingdom's 20th anniversary in 1992, the original show returned to rotate with the Christmas show as it had since 1984.

The attraction closed at Disneyland on September 9, 2001, to make room for The Many Adventures of Winnie the Pooh on April 11, 2003. However, it is rumored that the attraction will be rebuilt in Grizzly Peak at Disney's California Adventure, but there are currently no confirmed plans. 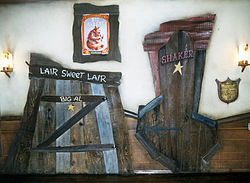 The queue for the Disneyland version included fake doors in appropriate shapes for each of the bear performers. 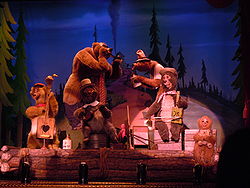 The main band from the Magic Kingdom version.

Henry- The "MC" of the show, Henry is a welcoming and friendly brown bear. He wears a grey top hat, starched shirt front, and a string tie. It is implied that he and Teddi have some sort of backstage romance. In the Christmas show, he wears a scarf and in the Vacation Hoedown, he wears a park ranger's hat and his "old camp t-shirt" (which he has obviously outgrown). Henry was voiced by Pete Renaday, a Disney legend who was also the voice of Captain Nemo in the now defunct 20,000 Leagues subs attraction in WDW, the narrator in The Many Adventures of Winnie the Pooh dark ride, and the announcer for the Tomorrowland Transit Authority. He is also the narrator of The Walt Disney Story pre-show for Great Moments with Mr. Lincoln.[1] Akira Takarada voiced the character in the Tokyo Disneyland version.

Liver Lips McGrowl- Liver Lips is perhaps the funniest-looking bear. He gets his name from his very large lips. He is a brown bear and plays the guitar. He is voiced by Jimmy Stoneman. He becomes an Elvis impersonator in the two seasonal shows.

Wendell- Wendell is a hyperactive golden brown bear who plays the mandolin. He wears a blue bandanna around his neck and a light brown hat. He also has a massive overbite and buck teeth. He is voiced by Bill Cole.

Teddi Barra- Teddi Barra is a unique bear because she never appears on stage. Instead she descends from a hole in the ceiling on her swing, which is decorated with pink roses. She is a brown bear and wears a blue hat with a pink feather as well as a long pink bow around her neck. She is voiced by Roni Stoneman. In the Christmas show, she holds a pair of skis, has a cast on her leg and is dressed in ski gear. In the Vacation Hoedown, she holds an umbrella and is dressed in a raincoat and galoshes.

Ernest- Ernest is a brown bear who plays the fiddle. He wears a derby and a red polka-dot bowtie around his neck. He was voiced by Van Stoneman from October 1971 until July 1975, when his vocals were rerecorded by Randy Sparks. Stoneman's recording can still be heard on the 1971 record and 2003 CD.

Terrence (aka Shaker)- A tall bear with tan fur (in the Disneyland version his fur was grey), Terrence wears a miner's cap and plays the guitar. He is voiced by Van Stoneman. In the Christmas show he wears a scarf and earmuffs and has white fur to resemble a polar bear. He is also joined by a penguin encased in ice. During the Vacation Hoedown, he's wearing a snorkel mask and swim trunks, and his accompanied by his octopus girlfriend Delores.

Trixie- Trixie is a very large brown bear who wears a blue bow on her head, a blue tutu around her waist, and holds a blue handkerchief in her left hand. She also has a slight crush on Henry. She is voiced by Cheryl Poole.

Big Al- Big Al is the fattest bear. He is grey with a light grey belly and wears a tan hat and a red vest. He plays an always out-of-tune guitar and is voiced by Tex Ritter. In the Vacation Hoedown he wears a miner's cap and red and black flannel shirt. During the Christmas show, he's dressed as a New Year's baby (sash and diapers) and wears an icepack and a party hat on his head.

Gomer- Gomer never sings but instead plays his piano, which has a honeycomb on top of it. He is considered Henry's right-hand bear. He is tall and brown and wears a collar with a blue tie.

Baby Oscar- Oscar appears with The Five Bear Rugs, but plays no instrument. In fact, he never says a word, aside from mumbling "uh-huh" during the Vacation Hoedown (in which he is dressed as a Cub Scout). He is a brown bear and always has his teddy bear to keep him company. In the 1971 album, it is mentioned that Zeb is his father.

Rufus- Rufus is not a performer, but instead runs the projections and lights. He is never seen, but can be heard from time to time running backstage, constantly out of breath. 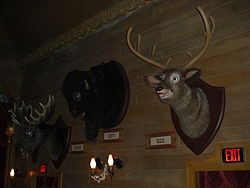 Buff- Buff is considered the leader of the animal heads and is also the largest. He is the head portion of an American bison and is voiced by Disney legend Thurl Ravenscroft.

Max- Max is the head portion of a stag and is voiced by Peter Renaday.

Melvin- Melvin, a moose head, is the Dopey of the animal head trio. He often makes good-natured jokes and is voiced by Bill Lee.

A tribute to the Disneyland Jamboree is made in their version of The Many Adventures of Winnie the Pooh in the form of Max, Buff, and Melvin.

Sammy- Sammy is Henry's raccoon pal who cuddles around Henry's top hat. He acts like a coonskin cap for Henry. He is voiced by Bill Cole.

The show is basically a continuous string of short country songs sung by the various bears. As each bear sings their song, a curtain opens to reveal them, except in the case of Wendell, Gomer, and the Sun Bonnet Trio (all of whom who rise from the center stage), and Teddi Barra (who descends from the ceiling).

The show begins with Max, Buff, and Melvin telling Henry to get on with the show. Henry then asks Gomer to give him a "little intro", and the jamboree begins. 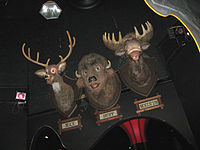 Max, Buff and Melvin on Winnie the Pooh ride.