Davy Crockett’s Explorer Canoes is a free-floating canoe experience at the Disneyland park in Anaheim, California. Boarding from the park’s Critter Country section, up to twenty visitors paddle a canoe around the Rivers of America, accompanied by two guides. This is the only Disneyland attraction that is powered by park visitors.

The attraction originally opened as Indian War Canoes on July 4, 1956 as part of Frontierland’s Indian Village expansion. It also operates under the name of Beaver Brother's Explorer Canoes at Tokyo Disneyland and formerly operated at the Magic Kingdom in Walt Disney World and at Disneyland Park in Disneyland Paris. 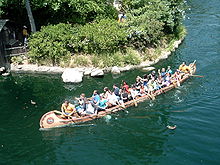 Canoe cruising around the Rivers of America

At the original Disneyland version of the attraction, riders embark and disembark from a small boat dock next to the Hungry Bear restaurant in the Critter Country section of the park. Each 35-foot-long (11 m) fiberglass canoe holds twenty guests, two per row. Each canoe has two guides dressed as frontiersmen (or frontierswomen) at the bow and stern. These guides are referred to as the helmsman, bowman, and sternman.

Riders/rowers are given a short lesson on how to paddle the canoe to power the boat properly after leaving the dock. Small children are required to wear life jackets. Life jackets are also available for adults who cannot swim in the event the boat ever capsizes. As the canoe travels 2,400 feet (730 m) around Tom Sawyer Island, located in the center of the artificial river, the guides point out the sights along the way, such as a settler’s cabin and the Indian chief on horseback. The ride’s length depends upon how fast the paddlers are and how much other traffic is on the river.

Lacking tracks or a predetermined path to follow, they typically travel much faster than the large boats, like the Mark Twain Riverboat, which ride along submerged tracks and have the right-of-way. The canoes return by the last bend of Splash Mountain, where guides occasionally deliver an extra splash to passing riders with their oars. This attraction operates seasonally. It is usually open on the park's busier days in the warmer times of the year, but not on rainy days. The attraction closes at dusk.

It is one of only two attractions in Disneyland to be in three different lands without ever being moved. Originally called Indian War Canoes, the attraction opened on July 4, 1956, as part of Frontierland’s Indian Village expansion, with real American Indian guides aboard every canoe. Guests used a "D ticket" to ride the attraction. The Indian War Canoes closed with Indian Village in 1971 but reopened on May 19 as Davy Crockett’s Explorer Canoes, inspired by the Davy Crockett miniseries, with the guides now wearing coonskin caps.

It became a part of Bear Country, home of Country Bear Jamboree, when that section of the park opened in 1972. The area was later renamed Critter Country in 1989, which now takes in Splash Mountain and The Many Adventures of Winnie the Pooh attractions. The canoes closed suddenly on October 3, 1998, igniting rumors that they were closed permanently. However, the attraction reopened the following June. Davy Crockett’s Explorer Canoes operates on busier days only, primarily in the summer and on weekends.

In addition to the Explorer Canoes, Disneyland and the Magic Kingdom's Liberty Square operated the Mike Fink Keel Boats until 1997. This attraction was based on the miniseries episode "Davy Crockett's Keelboat Race".

Davy Crockett's Explorer Canoes debuted in Frontierland on opening day at Walt Disney World. A C ticket was required for guests to board the 35-foot (11 m) long canoes from a dock located to the north of the Tom Sawyer Island raft launch and travel along the same path as other watercraft on the Rivers of America. Walt Disney World permanently closed the attraction in 1994.[1]

A canoe attraction opened in Tokyo Disneyland under the name of Davey Crockett Explorer Canoes along the Rivers of America in the theme park's Westernland. It was renamed Beaver Brothers Explorer Canoes in 1992 with the opening of Critter Country.

An Indian Canoes canoe ride opened with Euro Disneyland on April 12, 1992. However, the Frontierland attraction closed in 1994 due to overcrowding on the Rivers of the Far West.