Walt Disney's Enchanted Tiki Room is an attraction located in Disneyland at the Disneyland Resort and at the Magic Kingdom at the Walt Disney World Resort.

The attraction opened on June 23, 1963 and was the first to feature Audio-Animatronics, a WED Enterprises patented invention. The attraction was sponsored by United Airlines for its first 12 years; in 1976, sponsorship passed over to Hawaii's Dole Food Company, which remains the sponsor to the present day. Dole also provides the unique Dole Whip soft-serve frozen dessert sold at a snack bar near the entrance.

The show was originally going to be a restaurant featuring Audio-Animatronic birds serenading guests as they ate and drank. The "magic fountain" at the room's center was originally planned as a coffee station (there is still a storage compartment within the base of the fountain) and the restaurant would have shared its kitchen with the now-defunct Tahitian Terrace in Adventureland and the Plaza Pavilion restaurant at the corner of Main Street, U.S.A. since all three are actually part of the same building. Since ownership of the attraction was separate from the rest of the park, a nominal admission charge of $0.75 was levied. Since computers have played a central role in the attraction since its inception, Walt Disney's Enchanted Tiki Room was also Disneyland's first fully air-conditioned building.

The attraction opened in an era when all things Polynesian were popular and was an immediate hit. It houses a Hawaiian-themed musical show "hosted" by four lifelike macaws whose plumage matches their implied countries of origin. "José" is red, white and green and speaks with a Mexican accent, voiced by Wally Boag; "Michael" is white and green with an Irish brogue, voiced by Fulton Burley; "Pierre" is blue, white and red, and has a French accent courtesy of the voice talents of Ernie Newton while red, black and white "Fritz" has a German accent provided by Thurl Ravenscroft, who also voices Maori god Tangaroa near the attraction's entrance.

The main birds have changed color over the years. In 1965, the four host birds had almost identical plumage of white, green, yellow and blue. The four macaws as well as all the other birds are plumed with real feathers with the exception of chest plumage. The chests are covered in custom-woven cashmere which allows the figures to "breathe" in a lifelike manner. The choice came quite by accident; in a planning meeting, Harriet Burns noticed a cashmere sweater that Walt Disney was wearing which moved at the elbows exactly the way the engineers envisioned.

The presentation features a "cast" of over 150 talking, singing and dancing birds, flowers, the aforementioned magic fountain, tiki drummers and tiki totem poles that perform the attraction's signature tunes, "The Tiki Tiki Tiki Room" by the Sherman Brothers and "Let's All Sing Like the Birdies Sing". The finale has every Audio-Animatronic figure performing a rousing version of "Hawaiian War Chant". The choice of exit music is somewhat unusual, namely an arrangement of "Heigh-Ho" from Snow White and the Seven Dwarfs with lyrics thanking guests for watching the show and hurrying them to the exit.

So innovative was the technology by 1963 standards that an Audio-Animatronic talking "barker" bird (Juan, cousin of José) once located near the walkway to beckon visitors inside, caused enormous traffic jams of visitors trying to catch a glimpse of it. While waiting outside in a lanai area for the show to start, visitors are serenaded by Hawaiian music which at one time included that of Martin Denny and Bud Tutmarc. Hawaiian gods are represented as well around the perimeter of the lanai and each has a rhyming legend to tell via Audio-Animatronics.

Some include Hina Kuluua, goddess of rain; Rongo, god of agriculture; Maui, who roped the playful sun; and Tangaroa, father of all gods and goddesses. A brief documentary of the history of the pineapple is presented as well. The story, filmed in the early 1960s and updated at the end with a Macromedia Flash presentation of a parade of Dole products, is shown on a screen on the rear of the roof of the Dole snack bar at the entrance to the lanai. Other than the removal of a minor musical number set to the "Barcarolle" from Jacques Offenbach's opera Tales of Hoffmann and the final verse of "The Tiki Tiki Tiki Room", the show has remained otherwise unchanged since its 1963 inception due to a stipulation in the sponsorship contract with Dole that the attraction remain unchanged.

One chorus of "Let's All Sing Like The Birdies Sing" has José crooning like Bing Crosby, Fritz scat-singing in a gravelly voice like that of Louis Armstrong and Pierre singing like Maurice Chevalier. The show reopened in March 2005, after a seven-month refurbishment, commissioned by new Disneyland management in a bid to restore the park to its former glory for its 50th birthday. Feathers were regularly falling out of the Audio-Animatronics, the thatched roof of the building was breaking away in broad daylight, and the movements of the Audio-Animatronics were noisy and slow.

After the renovation, the original show and storyline remained but with a digitally remastered audio (remastered by Randy Thornton, who produced A Musical History of Disneyland (2005)), a new sound system both indoors and out, and completely new Audio-Animatronics. These look the same as the previous ones, but have a completely different infrastructure. Updates in technology allowed Walt Disney Imagineering, the descendants of WED Enterprises, to create a show to satisfy 21st century expectations while retaining its classic look and feel.

The original Tiki Room was controlled by a large room full of floor-to-ceiling computers that operated the birds with data on magnetic tapes, which was located underneath the floor of the main show room. Footage of the original control room[2] is available on the 10th anniversary special made in 1965 featuring Walt Disney and "Miss Disneyland 1965" called "The Tencennial Special."

A virtually identical copy of the show, called Tropical Serenade, was installed at Walt Disney World's Magic Kingdom when that park opened in 1971. Although accompanied by a new pre-show, the main show was the same. Tropical Serenade was replaced in 1998 with The Enchanted Tiki Room (Under New Management), featuring Iago and Zazu from Aladdin and The Lion King, respectively.

On January 12, 2011, a small fire broke out in the attic of the attraction. The Iago audio-animatronic figure was severely damaged in the blaze. It was announced at Disney's D23 Destination D: Walt Disney World 40th Anniversary Conference that the attraction would be refurbished and returned to the original show format.

The attraction re-opened on August 15, 2011 as Walt Disney's Enchanted Tiki Room and was reinstated as a slightly edited version of Disneyland's original show.[3][4]

The attraction was once a clone of the original attraction until it closed for refurbishments in 1999, when it became The Enchanted Tiki Room: Now Playing "Get the Fever!", where the attraction was re-themed as a madcap Las Vegas-style nightclub show in the middle of the jungle. In January of 2008, it closed again and reopened on July 25, 2008 as The Enchanted Tiki Room: Stitch Presents Aloha e Komo Mai!, featuring Stitch from Lilo and Stitch.

Of interest to the original sound recording of the Enchanted Tiki Room for Disneyland, most of the background birds, as well as the singing voice of Pierre (which puts into question the listed acting voice as stated in the description) were created via the talented vocal cords and warbling skills of Purvis Pullen, aka Purv Pullen, aka Dr. Horatio Q. Birdbath. Pullen was a comedy talent best known for his time with Spike Jones and his City Slickers.

According to Eugene Chadbourne writing for Allmusic - "...At the same time, his Pierre the Parrot in Disneyland's Enchanted Tiki Room doesn't seem to have any relation to Pierre Salinger. It is actually the voices of the birds in the Tiki Room that represented Birdbath's proudest achievement. He was fond of telling interviewers that he had done every single bird in the place."

Wally Boag is also credited as providing the voice for Jose' the parrot. 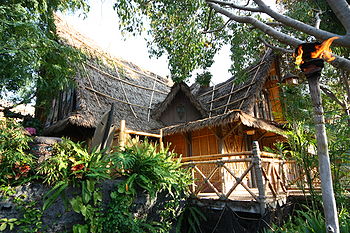 According to the book Disneyland Detective by Kendra Trahan, the "cast list" breaks down as follows: