Tiki kitsch culture is a 20th-century theme used in Polynesian-style restaurants and clubs originally in the United States and then, to a lesser degree, around the world. Although inspired in part by Tiki carvings and mythology, the connection is loose and stylistic, being an American kitsch form and not a Polynesian fine art form.

Tiki kitsch in the United States began in 1934 with the opening of Don the Beachcomber, a Polynesian-themed bar and restaurant in Hollywood.[1] The proprietor was Ernest Raymond Beaumont-Gantt, a young man from Louisiana who had sailed throughout the South Pacific; later he legally changed his name to Donn Beach. His restaurant featured Cantonese cuisine and exotic rum punches, with a decor of flaming torches, rattan furniture, flower leis, and brightly colored fabrics. Three years later, Victor Bergeron, better known as Trader Vic, adopted a Tiki theme for his restaurant in Oakland, which eventually grew to become a worldwide chain.[2] The theme took on a life during the restaurant's growth in the Bay Area. The Trader Vic in Palo Alto not only spawned architectural choices, such as the architectural concept behind the odd looking Tiki Inn Motel,[3] which still exists as the Stanford Terrace Inn.[4] There also currently exists a modern sculpture garden from Papua New Guinea [5] that was made to celebrate the modern form of art that was a large part of the original inspiration for tiki culture.[6] 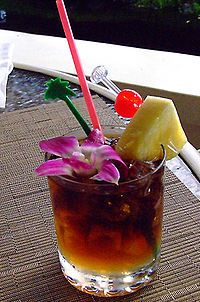 The mai tai is a quintessential tiki cocktail.

Tiki culture of mid-century America was primarily born in the restaurant industry. Don the Beachcomber's in Hollywood, California, is largely credited as being the first tiki restaurant from which all other eateries and bars "borrowed." Donn Beach, the founder of Don The Beachcomber, is also credited as having created the tropical drink genre singlehandedly. Donn was the first restaurateur to mix flavored syrups and fresh fruit juices with rum. These drinks were called Rhum Rhapsodies and made Don the Beachcomber's restaurant the hot spot for Hollywood elite and stars from the 1940s well into the 1960s. By the mid to late 1950s, many restaurateurs had begun to copy, and in some cases, steal Donn's theme, food and cocktails. Many eventually created their own cocktails and signature food dishes based on Asian themes. Donn Beach is credited for having created some of the most memorable exotic cocktails such as the Scorpion and the Zombie. Howard Hughes was a regular at the Hollywood Don the Beachcomber. A story persists that Hughes struck and killed a pedestrian one night while driving home from Don the Beachcombers, after consuming too many Zombies.

Trader Vic (Victor Bergeron) was a Donn Beach contemporary and the founder of Trader Vic's restaurant chain. Both created a variety of "Polynesian" dishes, including crab Rangoon and rumaki.

The mai tai is considered to be the quintessential tiki cocktail. A protracted feud between Donn Beach and Trader Vic erupted when both claimed to have invented the mai tai.

Most, if not all, tiki-themed establishments served at least some of their cocktails in ceramic mugs depicting tikis; also known as tiki mugs. The styles and sizes varied widely. Most restaurants offered their signature drink in a tiki mug that the patron was able to take home. This led to a large number of tiki mugs surviving as souvenirs. Today, the tiki mug is a highly prized find and is considered to be as much a symbol of the Tiki culture as a tiki itself.

With the resurgence of tiki culture in the later part of the 1990s, a resurgence in the interest of the original exotic cocktails has grown as well. Jeff "Beachbum" Berry released several drink books containing the recipes for many of the signature drinks from long lost tiki restaurants and bars, as well as classic tiki cocktails from Trader Vic's and Don the Beachcombers.

Today, Trader Vic's is the only major restaurant chain still in operation. However, a new Don The Beachcomber was opened in Huntington Beach, California in 2009—having taken over Sam's Seafood Restaurant/Kona. Sam's was also a long lived tiki-themed restaurant that dated back to the 1940s. It was sold in 2007 and the name was changed to Kona for a short period before the current owner of the Don The Beachcomber corporate name took it over. The opening of the Don The Beachcomber in Huntington Beach in 2009 marks the first appearance of the tiki brand eatery on the mainland United States in over 30 years.

In addition to the returning WWII veterans, several other factors contributed to the mid-century American explosion in Polynesian Kitsch Pop culture or Tiki Culture. Post-war America saw the rise of the middle class as an economic force. This coupled with ever increasing affordability of travel, particularly newly established air travel to Hawaii, helped to propel the nation's interest in all things tropical. Hawaiian statehood was a major factor which further drove the tropical lifestyle popularity, and Americans fell in love with their romanticized version of an exotic culture. Another related factor was the excitement surrounding the Kon-Tiki expedition.

Polynesian design began to infuse every aspect of the country's visual aesthetic, from home accessories to architecture. Single family homes, apartment complexes, business and even large shopping and living districts of some cities were heavily influenced by Polynesian aesthetics. However, by the 1980s, most of the Polynesian aesthetic had been completely wiped away in the name of progress, some architectural examples of homes, apartments and restaurant buildings remain. A small handful of locations still contain carved tikis.

Soon came integration of the idea into music by artists like Les Baxter, Arthur Lyman, and Martin Denny, who blended the Tiki idea through jazz augmented with Polynesian, Asian, and Latin instruments and "tropical" themes creating the Exotica genre. This music blended the elements of Afro-Cuban rhythms, unusual instrumentations, environmental sounds, and lush romantic themes from Hollywood movies, topped off with evocative titles like "Jaguar God", into a cultural hybrid native to nowhere.

There were two primary strains of this kind of exotica: Jungle and Tiki. Jungle exotica was a Hollywood creation, with its roots in Tarzan movies and further back, to William Henry Hudson's novel Green Mansions. Les Baxter was the king of jungle exotica, and spawned a host of imitators while opening the doors for a few more genuine articles such as Chaino, Thurston Knudson, and Guy Warren.

The visual iconography of the CBS-TV series Gilligan's Island, which was originally broadcast in 1964-1967, borrowed significantly from tiki culture, with the "castaways" depicted as building huts, furniture, and housewares that resembled elements of fantasy-Polynesian culture presented to Americans by period bars and restaurants.

The mid 1990s saw the beginning of a revival of the Tiki kitsch culture.

Several books on the subject of Tiki kitsch have been published, including The Book of Tiki by Sven Kirsten, published by Taschen. This book is credited with bringing mid-century Tiki culture back into the American mainstream.[citation needed]

Tiki-themed events and conventions have begun to spring up across America—with the majority happening in Southern California. Large annual events include Tiki Oasis in San Diego; Hukilau in Fort Lauderdale and Ohana Luau at the Lake in Lake George, NY.