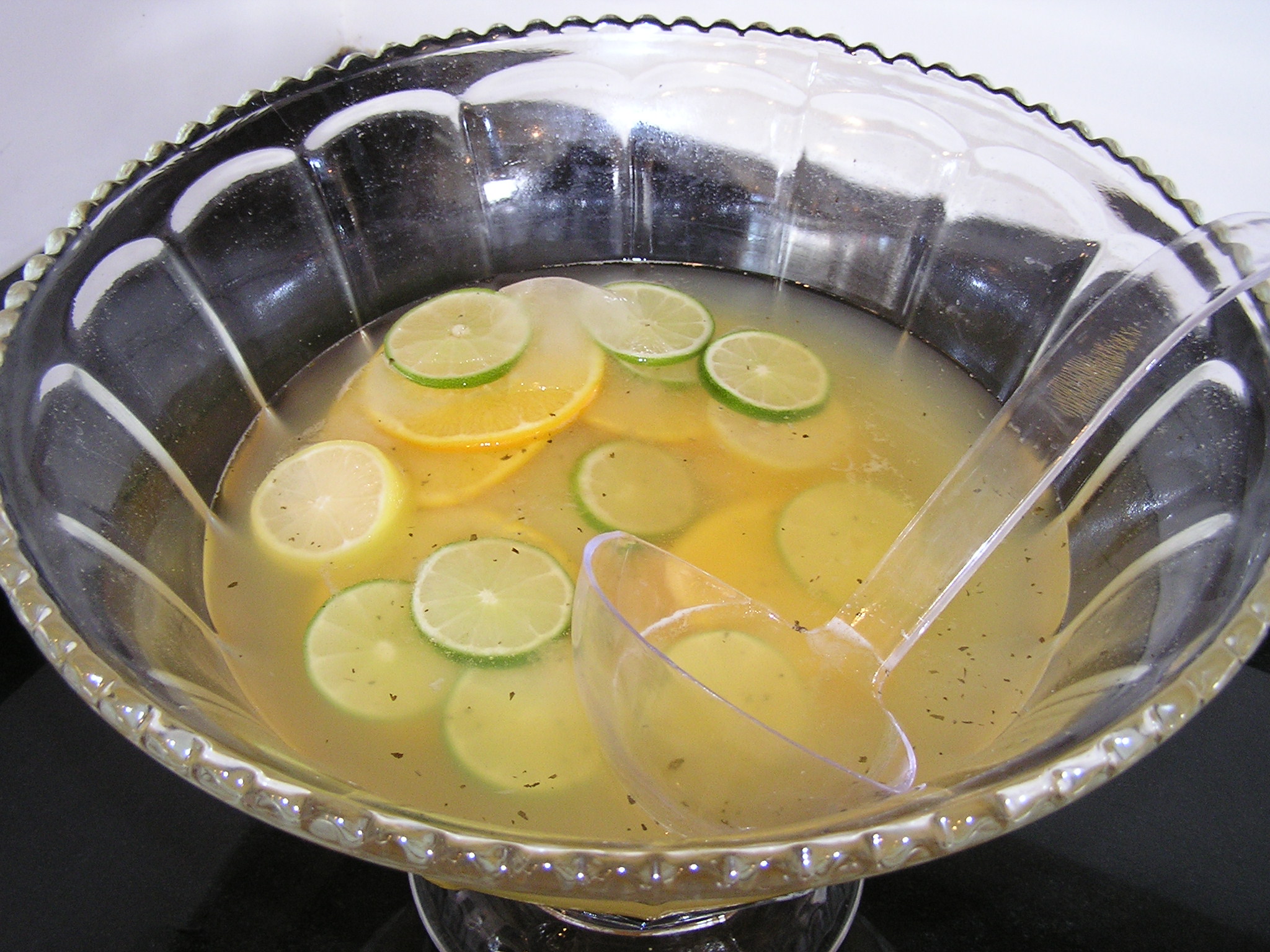 Punch is a general term for any of a wide assortment of , either soft or alcoholic, generally containing or fruit juice. Punch is typically served at parties in large, wide bowls known as punch bowls.

The word "punch" is a from Parsi. The original drink was named "panj", which is Persian for five, and the drink was made from five different ingredients: , , , water, and or s. This name was popularized by the s of the and brought back to , and from there it was introduced into other an countries.

Alternatively, it may have derived from the word "", a that held 72 , from which a punch bowl could be made.

The term "punch" was first recorded in British documents dating back to . At that time, most punches were of the type, or with a or base, but by around , when came out with , the 'modern' punch was born, and, by , there are references to s.

"The Cup" — an English tradition

Cups are another type of punch. An English tradition, served before the departure of a hunting party, but today are served at a variety of social events such as garden parties, and matches and at s. Cups are generally lower in alcohol to punches and usually have , , , or other low alcohol liqueur as the base, and often include quantities of s and/or s.

One well known cup is the Pimm's Cup, using №1 and British-style at a ratio of 1:2, a squeeze of lemon juice, then add orange, lemon and apple slices and a couple of cucumber wedges.

Bajan (Barbadian) Rum Punch is one of the oldest rum punches and has a simple recipe enshrined in a national rhyme: "One of Sour, Two of Sweet, Three of Strong, Four of Weak." That is, 1 part lime juice, 2 parts sweetener, 3 parts rum (preferrably Barbados rum), and 4 parts water. It is served with a dash or two of Angostura Bitters and Nutmeg.

The first known print reference to Planter's Punch is in the August 8, 1908 edition of the New York Times:

This recipe I give to thee,
Dear brother in the heat.
Take two of sour (lime let it be)
To one and a half of sweet,
Of Old Jamaica pour three strong,
And add four parts of weak.
Then mix and drink. I do no wrong &mdash;
I know whereof I speak.

Fruit punches, such as or certain flavors of , contain no alcohol, but may be used as s in s.

In a large number of , Pacific or Indian Ocean countries, punch is drunk as an before meals.

In , "agua loca" (or "crazy water") is a very sweet punch usually made from fermented , , or , and mixed with (usually agua de Jamaica) or . Due to its sweetness, the drinker may not notice the taste of the and may become intoxicated more quickly than he or she had anticipated. This drink is popular on college campuses as a cheap way to get drunk.

In Germanic , punch (or "Punsch" in German) refers to a mixture of several s and s, often with or added. Punch is popular in , as well as with many Germans who emigrated to America. The traditional German often includes a "" ("Burnt Punch" or, literally, "Fire Tongs Bowl"). This is a punch made from red wine, and flaming poured over a "Zuckerhut" ("sugar hat"), a large conical placed on the "Feuerzange" which supports it above the bowl.

* s
* (an arrack-based liquor)
* is a rum-based mixed drink that is especially popular in French-speaking Caribbean states.