The park has a daily capacity of 34,000 visitors[2] — the least out of all Disneyland parks. It has so far fallen short of its targeted visitorship figures. The park attracted 5.2 million visitors in its first year, below its target of 5.6 million. Visitor numbers fell 20% in the second year to 4 million,[3] inciting criticisms from local legislators.[4] However, the park attendance slightly increased by 8% in the third year, attracting a total of 4.5 million visitors in 2007. In 2009, the park attendance again increased by 2% to 4.8 million visitors. The attendance continued to surge and received 5.23 million guests in the 2009/2010 fiscal year. Since the opening of Hong Kong Disneyland, the theme park has hosted over 25 million guests.[5] According to AECOM and TEA, Hong Kong Disneyland is the 15th most visited theme park in the world in 2010, with 5.2 million visitors.[6]

Hong Kong Disneyland currently occupies 22.4 hectares (55 acres), it will be expanded to 27.4 hectares (68 acres)[7] when three new themed areas are completed. After the expansion, the park is expected to handle 7.92 million to 8.92 million visitors annually. The park capacity will increase to handle up to 10 million visitors annually over a 15 year expansion period.[8]

Hong Kong Disneyland had the shortest construction period among all the Disneyland-style theme parks. On January 12, 2003, more than 400 guests celebrated the groundbreaking of Hong Kong Disneyland after the finishing of land reclamation in Penny's Bay. The audience included Tung Chee Hwa, then Chief Executive of Hong Kong; Michael D. Eisner, former Chairman and CEO of The Walt Disney Company; Robert A. Iger, president of The Walt Disney Company; and Jay Rasulo, former president of Walt Disney Parks and Resorts.[9] On September 23, 2004, a special "castle topping ceremony" was held in the park to commemorate the placing of the tallest turret on Sleeping Beauty Castle. Hong Kong Disneyland opened to the public at 13:00 local time on September 12, 2005. 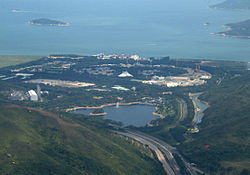 Aerial view of the park in 2011. The three new lands are under construction.

The park is divided into "lands" (themed areas) and well-concealed backstage areas. On entering a land, a guest is completely immersed in a themed environment and is unable to see or hear any other realm. The idea behind this was to develop theatrical "stages" with seamless passages from one land to the next. The public areas occupy approximately 22.4 hectares (55 acres). When the park initially opened, it consisted of four classic themed areas:

In 2014, Hong Kong Disneyland will include a total of seven themed lands and be expanded to 27.4 hectares (68 acres). The new themed areas are:

Throughout the park are 'Hidden Mickeys', or representations of Mickey Mouse heads inserted subtly into the design of attractions and environmental decor.

An elevated berm supports a narrow gauge railroad that circumnavigates the park.

Inspired by the Main Street, U.S.A. in Disneyland, the buildings of this Main Street are almost identical to those in Anaheim. Like other Disney theme parks, Hong Kong Disneyland's Main Street, U.S.A. serves as the entrance of the park. Plans originally featured a restaurant under the Railroad station, but were scrapped due to budget reasons. The decor is small-town America from the years 1890-1910.

Though being very similar to Anaheim's main street, the theme is heavily influenced by European immigrants. Plaza Inn — which has the identical exterior design as the one in Disneyland — mimics a classical Chinese eatery that was created by a wealthy American couple who were infatuated with Chinese culture. Another restaurant, the Market House Bakery is reminiscent of a bakery founded by a Viennese pastry chef who brought the world's most famous desserts from the Austrian imperial court.

Unlike Main Streets from other parks, Main Street at Hong Kong Disneyland is built mainly of wood instead of stone. There are no horse-drawn streetcars, though tracks for the streetcars can be seen from the concept arts.

Hong Kong Disneyland's Adventureland is the biggest among all Disney parks. It features a large island area home to Tarzan's Treehouse, which is circled by the Jungle Cruise — much like the Rivers of America in most Frontierland theme areas. The Adventureland is also home to the "Festival of the Lion King" show.

Fantasyland features Sleeping Beauty Castle, as well as the Fantasy Gardens where costumed Disney characters can be met.

Tomorrowland at Hong Kong Disneyland features an emphasis on metallic trim, dominated by blue and purple hues. Since the opening of the park, unique attractions have been added into the Hong Kong's Tomorrowland, such as a new Autopia and Stitch Encounter.

Opened November 17, 2011. Toy Story Land at Hong Kong Disneyland is themed using bamboo to act as giant blades of grass surrounding the area. The themed land will make use of characters from the Toy Story movies, such as an enlarged Woody, Rex, an oversized paper plane, and Luxo Jr.

The land is located to the west side of Hong Kong Disneyland, behind Fantasyland.

Grizzly Gulch, scheduled to open in 2012, is Hong Kong Disneyland's equivalent of Frontierland and Critter Country. The themed land reminisces an abandoned mining town called "Grizzly Gulch", set amidst mountains and woods. The centerpiece structure will be Grizzly Peak, inspired by Disney California Adventure. The town was set to be founded August 8, 1888 — the luckiest day of the luckiest month of the luckiest year — by prospectors looking to discover gold.

Mystic Point, scheduled to open in 2013, is a new themed land in Hong Kong Disneyland. It is set in a dense, uncharted rain forest surrounded by mysterious forces and supernatural events. The site will feature Mystic Manor, sets as a home to a world traveler and adventurer.

The park features a daytime parade "Flights of Fantasy" as well as a nighttime firework show "Disney in the Stars", and "Tinker Bell Castle Illumination", a new nighttime show that debuted along with "Celebration In The Air". Seasonal entertainment, such as "Disney's Haunted Halloween", "A Sparkling Christmas", and "Disney's Chinese New Year", are held in the park to celebrate major holidays.

The parade premiered on 18 January 2011 as part of "Celebration in the Air", celebrating the 5th anniversary of the Hong Kong Disneyland. The parade replaced Disney on Parade, which had been running since the park's opening. Steve Davison, producer of World of Color in Disney California Adventure, said that he was working on a parade for the 5th anniversary celebration.

Disney in the Stars 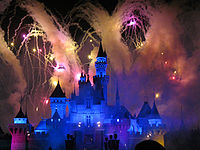 Disney in the Stars is a nightly fireworks show based on Fantasy in the Sky at other Disney parks. Fireworks and pyrotechnics are coordinated to orchestrated classic Disney musics such as "A Whole New World". The show premiered on 12 September 2005 at the park's inaugural ceremony.

A Muppet Mobile Lab is a free-roving, audio-animatronic entertainment implemented on a Segway platform. It features an interactive comedy show performed by two Muppet characters, Dr. Bunsen Honeydew and his assistant, Beaker, both riding their two-wheeled laboratory vehicle. 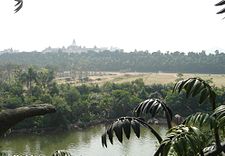 The Phase 1 Extension began with three new attractions for Tomorrowland that opened in the summer of 2006. In 2008, the Art of Animation, located in the Opera House, and the classic attraction "it's a small world" were added. The outer edge of Adventureland was under construction from early May to September 2008, adjacent to Festival of The Lion King. A temporary structure for Demon Jungle, an exclusive attraction for the 2008 Halloween, was built.

The Walt Disney Company has been negotiating with the Commerce and Economic Development Bureau of Hong Kong on funding the upcoming extension. The park plans to introduce three new theme lands, which will increase the total land area of the park by about 12 hectares. A number of new rides had been chosen and will be built in order to the market of young-adults and teenagers. It is reported that the preparation for groundbreaking has been finished and the park is ready to start the construction once it has granted permission from the government.

On 30 June 2009, Donald Tsang, the Chief Executive of Hong Kong, announced that the expansion of Hong Kong Disneyland had been approved by the Executive Council. The park will receive three new themed lands — Grizzly Trail, Mystic Point and Toy Story Land — which all located outside the Disneyland Railroad track, south to the current Adventureland.

The park will feature a total of seven themed areas after the completion of all the new attraction. The groundbreaking took place on 13 December 2009 for the construction of the three new lands.[10]

Currently, a new shopping district (Downtown Disney) and a third hotel are taken into discussions. For long-term construction, with the reclaimed land reserved for the Phase 2 Extension, it is expected that the resort's second Disney theme park will be built on that site. A Phase 3 Extension is also being considered by the Walt Disney Company and the Hong Kong Government.

Just before the grand opening, the park was criticised for overestimating the daily capacity limit.[11] The problem became apparent on the charity preview day on 4 September 2005, when 30,000 locals visited the park. The event turned out to be a disaster, as there were too many guests. Wait times at fast food outlets were at least 45 minutes, and wait times at rides went up to 2 hours.

Although the park's shareholders and the Hong Kong Government set pressure upon the park to lower the capacity, the park insisted on keeping the limit, only agreeing to relieve the capacity problem by extending the opening time by one hour and introducing more discounts during weekdays. However, the park stated that local visitors tend to stay in the park for more than nine hours per visit, implying that the mentioned practices would do little to solve the problem.[citation needed]

During Chinese New Year 2006, many visitors arrived at the park in the morning bearing valid tickets, but were refused entry, because the park was already at full capacity. Disgruntled visitors attempted to force their way into the park and climbing over the barrier gates.[12] Disneyland management was forced to revise their ticketing policy and designated future periods close to Chinese public holidays as 'special days' during which admission would only be allowed through a date-specific ticket.

As at other Disney theme parks, visitors to Hong Kong Disneyland have their finger biometrics scanned at the entry gate. Visitors are not warned of the policy beforehand. Fingerprinting is done of all visitors older than 11 years of age, and is used to associate ticket media with the person using it. The company claims that the surface of a guest's finger do not contain sufficient information to recreate a fingerprint image. Nonetheless, forensic specialists note that the data collected are more than adequate to establish a positive identification.[13]

Disney initially refused to release the attendance figures after media reports surfaced saying the park's attendance numbers might be lower than expected. Disney finally declared[14] on 24 November 2005, that Disney had over 1 million guests during its first two months of operation.