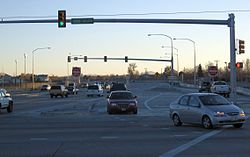 Continuous flow intersection in West Valley City, Utah showing the layout and normal traffic flow in the southwest portion of the intersection.

Continuous flow intersection (CFI), also called a crossover displaced left-turn (XDL), is an at-grade intersection that moves the turning vehicles, conflicting with the through-movements (to the left where traffic drives on the right, and vice-versa), out of the main intersection. A CFI moves the left turn down the road several hundred feet, eliminating the left-turn traffic signal phase. A fly-over designed CFI (non-at-grade) was a previously patented design invented by Francisco Mier, of Mexico. Over 40 have been implemented over the past decade. As the design was patented, agencies previously had to pay to obtain the rights for use of the design;[1] however, the patent has expired in the United States.[2] This general configuration has appeared in different versions in various places, with the implementation of channelization in the United States since the 1950s, such as the Telegraph Road section of U.S. Route 24 in Michigan.

CFI locations in the United States 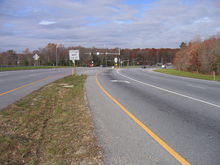 Listed in order of implementation:

The Louisiana DOTD article on the Baton Rouge CFI includes a particularly informative diagram of that intersection.[4]

To reduce confusion regarding the left-turn lane, the left-turn lane and the straight-through lanes are usually separated by a concrete barrier or traffic island. This diagram shows the straight-through lanes offset by one lane through the intersection and are guided by lines painted through the intersection. But this is just a sample configuration; the lanes may be offset by more lanes or none at all.

Nonetheless, due to the provision of traffic between two directions of opposing traffic, some motorists tend to maintain an ongoing criticism of the intersection. Additionally, as in the case of the half-CFI in Accokeek, the offset left-turn traffic reenters the main traffic stream via a half-signal, requiring motorists to merge from a stop condition onto the higher-speed mainline. Motorists sometimes cite discomfort due to the speed differential, a known cause of accidents, though conflicts could be reduced through the provision of an adequate acceleration lane and merge area. The Accokeek, MD CFI also has notable inequalities in traffic flow depending upon the direction of travel.

This type of intersection can require a significant amount of right-of-way to implement (dependent upon the configuration), which is why the technique is not frequently used in urban areas. However, the amount of right-of-way necessary for construction and final operation is still typically less than that of an interchange. Additionally, as there is no grade separation involved, costs are considerably less than that of an interchange alternative.

Note that due to the relatively recent installation of the CFI in Baton Rouge, West Valley, UT, and Fenton, MO, some images may not show the existing conditions.