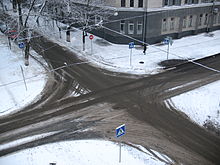 An intersection is a road junction where two or more roads either meet or cross at grade (they are at the same level). An intersection may be 3-way - a T junction or fork, 4-way - a crossroads, or 5-way or more. It may often be controlled by traffic lights, and may be a roundabout (traffic circle in America).

Some may classify intersections as 3-way, 4-way, 5-way, 6-way, etc. depending on the number of road segments (arms) that come together at the intersection.[weasel words]

Seven or more approaches to a single intersection, such as at Seven Dials, London, are rare. 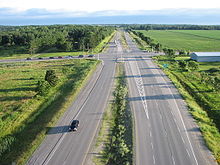 Intersection along the Veterans Memorial Parkway, an at-grade limited-access road in London, Ontario.

Another way of classifying intersections is by traffic control:

At same-grade intersections, turns are usually allowed, but often regulated to avoid interference or collision with other traffic. If the crossing street is a one-way street, a turn into the opposing direction is not allowed, as indicated by "ONE WAY" or "NO LEFT TURN" or "NO RIGHT TURN" signs. In a few other cases, certain turns may be not allowed or limited by regulatory signs or signals, such as a sign saying "NO TURN ON RED" (no turn allowed when a red light is on). In the absence of lane markings indicating otherwise, left turns should be made from the leftmost lane and right turns from the rightmost lane to avoid collision or blocking of traffic going straight.[clarification needed] 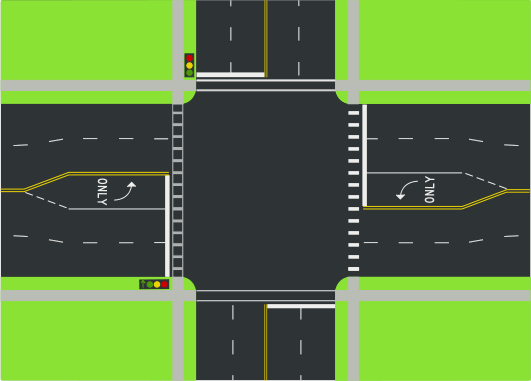 Diagram of an example intersection of two-way streets as seen from above (traffic flows on the right side of the road). The East-West street has left turn lanes from both directions, but the North-South street does not have left turn lanes at this intersection. The East-West street traffic lights also have green left turn arrows to show when unhindered left turns can be made. Some possible markings for crosswalks are shown as examples.

Diagram of a fork.

A fork (literally "fork in the road") is a type of intersection. When a road splits, the main road steers to the left or right, depending of what side you drive on, and the smaller road heads straight. It is common for 2 lane roads. Heading toward the main road, the traveller must turn left or right. An example of this is the Brevard and Florida Avenue's intersection in Rockledge, Florida, If a road has a curb that sticks out, it is not classified as a fork.

In some places, wider white stop lines (see preceding diagram) indicate where vehicles should stop at an intersection when there is a stop sign or a red light in a traffic signal facing them. Some intersections have pedestrian crosswalks designated on the street pavement. Some possible markings for crosswalks are shown as examples. Note that the stop line is positioned to not allow stopped vehicles to block the crosswalk.

Ghost Island priority junctions are sometimes used in the United Kingdom to provide safer turning areas, which separate turning traffic from through traffic in a similar way to turn lanes (see above).