Noise mitigation is a set of strategies to reduce noise pollution. The main areas of noise mitigation or abatement are: transportation noise control, architectural design, and occupational noise control. Roadway noise and aircraft noise are the most pervasive sources of environmental noise worldwide, and little change has been effected in source control in these areas since the start of the problem,[citation needed] a possible exception being the development of hybrid and electric vehicles.

Multiple techniques have been developed to address interior sound levels, many of which are encouraged by local building codes; in the best case of project designs, planners are encouraged to work with design engineers to examine trade-offs of roadway design and architectural design. These techniques include design of exterior walls, party walls and floor and ceiling assemblies; moreover, there are a host of specialized means for dampening reverberation from special-purpose rooms such as auditoria, concert halls, dining areas, audio recording rooms, and meeting rooms. Many of these techniques rely upon materials science applications of constructing sound baffles or using sound-absorbing liners for interior spaces. Industrial noise control is really a subset of interior architectural control of noise, with emphasis upon specific methods of sound isolation from industrial machinery and for protection of workers at their task stations.

Sound masking is the active addition of noise to reduce the annoyance of certain sounds; the opposite of soundproofing.

This hybrid vehicle can operate 15 to 25 decibels quieter than conventional autos at speeds less than 60 km/h.

Source control in roadway noise has provided little reduction in vehicle noise, except for the development of the hybrid vehicle; nevertheless, hybrid use will need to attain a market share of roughly fifty percent to have a major impact on noise source reduction on city streets.[citation needed] (Highway noise is little affected by automobile type, since those effects are aerodynamic and tyre noise related.) Other contributions to reduction of noise at the source are: improved tire tread designs for trucks in the 1970s, better shielding of diesel stacks in the 1980s, and local vehicle regulation of unmuffled vehicles.

The most fertile areas for roadway noise mitigation are in urban planning decisions, roadway design, noise barrier design,[1] speed control, surface pavement selection and truck restrictions. Speed control is effective since the lowest sound emissions arise from vehicles moving smoothly at 30 to 60 kilometres per hour. Above that range, sound emissions double with each five miles per hour of speed. At the lowest speeds, braking and (engine) acceleration noise dominates. Selection of surface pavement can make a difference of a factor of two in sound levels, for the speed regime above 30 kilometres per hour. Quieter pavements are porous with a negative surface texture and use medium to small aggregates; the loudest pavements have a transversely tined or grooved surface, and/or a positive surface texture and use larger aggregates. Surface friction and roadway safety are important considerations as well for pavement decisions.

Noise barriers can be applicable for existing or planned surface transportation projects. They are probably the single most effective weapon in retrofitting an existing roadway, and commonly can reduce adjacent land use sound levels by up to ten decibels. A computer model is required to design the barrier since terrain, micrometeorology and other locale specific factors make the endeavor a very complex undertaking. For example, a roadway in cut or strong prevailing winds can produce a setting where atmospheric sound propagation is unfavorable to any noise barrier. 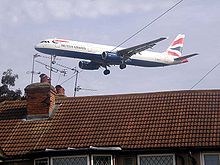 A British Airways Airbus A321, on landing approach to London Heathrow Airport, showing proximity to homes

As in the case of roadway noise, little progress has been made in quelling aircraft noise at the source, other than elimination of loud engine designs from the 1960s and earlier. Because of its velocity and volume, jet turbine engine exhaust noise defies reduction by any simple means. The most promising forms of aircraft noise abatement are through land planning, flight operations restrictions and residential soundproofing. Flight restrictions can take the form of preferred runway use, departure flight path and slope, and time-of-day restrictions. These tactics are sometimes controversial since they can impact aircraft safety, flying convenience and airline economics.

In 1979, the U.S. Congress authorized[3] the FAA to devise technology and programs to attempt to insulate homes near airports. While this obviously does not aid the exterior environment, the program has been effective for residential and school interiors. Some of the first airports at which the technology was applied were San Francisco International Airport,[4] Seattle-Tacoma International Airport, John Wayne International Airport and San Jose International Airport[5] in California. The underlying technology is a computer model which simulates the propagation of aircraft noise and its penetration into buildings. Variations in aircraft types, flight patterns and local meteorology can be analyzed along with benefits of alternative building retrofit strategies such as roof upgrading, window glazing improvement, fireplace baffling, caulking construction seams and other measures. The computer model allows cost effectiveness evaluations of a host of alternative strategies.

In Canada, Transport Canada prepares noise exposure forecasts (NEF) for each airport, using a computer model similar to that used in the US. Residential land development is discouraged within high impact areas identified by the forecast.[6]

In 1998, the flight paths in all of Scandinavia were changed as the new Oslo-Gardermoen Airport was opened. These new paths were straighter, reducing fuel use, and disturbing fewer people. However, vociferous protests came from people who were not disturbed before and they took legal action (NIMBY effect).

Beyond the interior acoustics cited above under aircraft noise, there has been a steady trend to design quieter buildings with regard to sources within and without the structure itself.[citation needed] In the case of construction of new (or remodeled) apartments, condominiums, hospitals and hotels, many states and cities have stringent building codes with requirements of acoustical analysis, in order to protect building occupants. With regard to exterior noise, the codes usually require measurement of the exterior acoustic environment in order to determine the performance standard required for exterior building skin design. The architect can work with the acoustical scientist to arrive at the best cost-effective means of creating a quiet interior (normally 45 dBA). The most important elements of design of the building skin are usually: glazing (glass thickness, double pane design etc.), roof material, caulking standards, chimney baffles, exterior door design, mail slots, attic ventilation ports and mounting of through the wall air conditioners.

Regarding sound generated inside the building, there are two principal types of transmission. Firstly, airborne sound travels through walls or floor and ceiling assemblies and can emanate from either human activities in adjacent living spaces or from mechanical noise within the building systems. Human activities might include voice, amplified sound systems or animal noise. Mechanical systems are elevator systems, boilers, refrigeration or air conditioning systems, generators and trash compactors. Since many of these sounds are inherently loud, the principal design element is to require the wall or ceiling assembly to meet certain performance standards[7] (typically Sound transmission class of 50), which allows considerable attenuation of the sound level reaching occupants.

The second type of interior sound is called Impact Insulation Class (IIC) transmission. This effect arises not from airborne transmission, but rather from transmission of sound through the building itself. The most common perception of IIC noise is from footfall of occupants in living spaces above. This type of noise is more difficult to abate, but consideration must be given to isolating the floor assembly above or hanging the lower ceiling on resilient channel.

Both of the above transmission effects may emanate either from building occupants or from building mechanical systems such as elevators, plumbing systems or heating, ventilating and air conditioning units. In some cases it is merely necessary to specify the best available quieting technology in selecting such building hardware. In other cases shock mounting of systems to control vibration may be in order. In the case of plumbing systems there are specific protocols developed, especially for water supply lines, to create isolation clamping of pipes within building walls. In the case of central air systems, it is important to baffle any ducts that could transmit sound between different building areas.

Designing special purpose rooms has more exotic challenges, since these rooms may have requirements for unusual features such as concert performance, sound studio recording, lecture halls. In these cases reverberation and reflection must be analyzed in order to not only quiet the rooms but prevent echo effects from occurring. In these situations special sound baffles and sound absorptive lining materials may be specified to dampen unwanted effects.

This situation classically is thought to involve primarily manufacturing settings where industrial machinery produces intense sound levels,[8] not uncommonly in the 75 to 85 decibel range. While this circumstance is the most dramatic, there are many other office type environments where sound levels may lie in the range of 70 to 75 decibels, entirely composed of office equipment, music, public address systems, and even exterior noise intrusion. The latter environments can also produce noise health effects provided that exposures are long term.

In the case of industrial equipment, the most common techniques for noise protection of workers consist of shock mounting source equipment, creation of acrylic glass or other solid barriers, and provision of ear protection equipment. In certain cases the machinery itself can be re-designed to operate in a manner less prone to produce grating, grinding, frictional or other motions that induce sound emissions.

In the case of more conventional office environments, the techniques in architectural acoustics discussed above may apply. Other solutions may involve researching the quietest models of office equipment, particularly printers and photocopy machines. One source of annoying, if not loud, sound level emissions are certain types of lighting fixtures (notably older fluorescent globes). These fixtures can be retrofitted or analyzed to see whether over-illumination is present, a common office environment issue. If over-illumination is occurring, de-lamping or reduced light bank usage may apply.