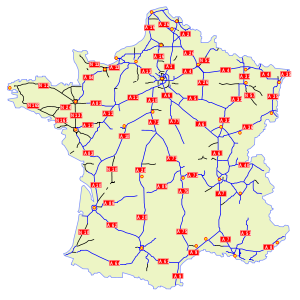 The Autoroute system in France consists largely of toll roads, except around large cities and in parts of the north. It is a network of 12,000 km (7,500 mi) worth of motorways. Autoroute destinations are shown in blue, while destinations reached through a combination of autoroutes are shown with an added autoroute logo. Toll autoroutes are signalled with the word péage (toll). 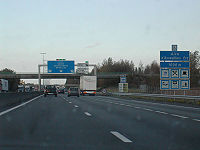 The French Autoroute A1 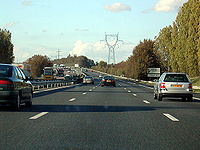 Some of the autoroutes have their own name in addition to a number: for instance, A6 and A7 are autoroute du Soleil (sun motorway), for they lead from northern to southern France and its sunny beach resorts. The A13 is named the autoroute de Normandie as it traverses Normandy. The A29 is part of the route des Estuaires, a chain of motorways crossing the estuaries of the English Channel. Additionally, the A40 is named the autoroute blanche (white motorway) because it is the road that goes to Chamonix and other French winter resort towns, and the N104, one of Paris's beltways, is also known as La Francilienne because it circles the region of Ile-de-France.

The status of motorways in France has been subject of debate through years, from their construction until recently. Originally, the Autoroutes were built by private companies mandated by the French government, and followed strict construction rules as described below. They are operated and maintained by mixed companies held in part by private interests and in part by the state. Those companies hold concessions, which means that Autoroutes belong to the French state and their administration to semi-private companies. The different companies are as follows:

Only in the Brittany region do most of the autoroutes belong to the government. They are operated by the regional council and are free from tolls.

France has the following speed limits for limited access roads:

In normal conditions, there is a minimum speed of 80 km/h (50 mph) in the lane most left (no minimum speed on the others' right lanes, but speed should be adapted for each situation : not too slow).

The autoroutes are designed to increase the safety of drivers; this allows a higher speed limit (130 km/h or 80 mph) than on the normal roads (90 km/h or 55 mph) with an acceptable risk of accident.

The safety measures are:

The toll roads were granted as concessions to mixed-economy corporations; the freeways roads are directly administered by the national government. Tolls are either based on a flat-rate for access to the road or on the distance driven. The latter case is the most common for long distances; users take a ticket from an automatic machine when they enter the autoroute, and pay according to the distance when exiting; toll booths accept debit cards, credit cards, as well as cash.

In 2005, the Villepin government proposed a controversial plan to sell all of the state's holdings in autoroute companies to private investors. Critics contend that the price announced is well below the profit forecasts for these companies, and thus that the government sacrifices the future to solve current budgetary problems.[1] 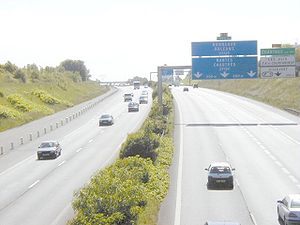 A10 autoroute near Paris 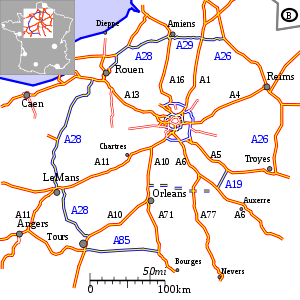 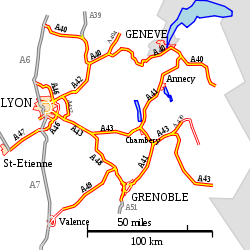 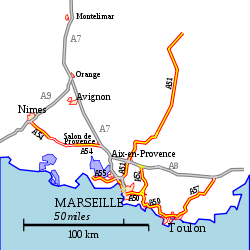 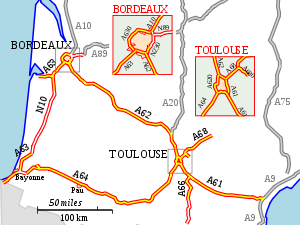 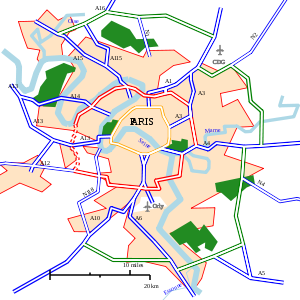 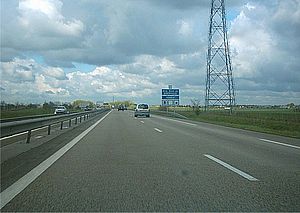 A13 in the outskirts of Caen