/ˈpleɪnoʊ/) is a city in the state of Texas, located mostly within Collin County. The city's population was 259,841 at the 2010 census, making it the ninth-largest city in Texas (Corpus Christi is ranked at #8 and Laredo is ranked at #10) and the 71st most populous city in the United States.[4] Plano is located within the metropolitan area commonly referred to as the Dallas–Fort Worth metroplex. The city is home to many corporate headquarters, including Alliance Data, Cinemark Theatres, Dell Services, Dr Pepper Snapple Group, Ericsson, Frito-Lay, HP Enterprise Services, J. C. Penney, Pizza Hut, Rent-A-Center, and Siemens PLM Software.

In 2005, Plano was designated the best place to live in the Western United States by CNN Money magazine. In 2006, Plano was selected as the 11th best place to live in the United States by CNN Money magazine.[5] Plano schools consistently score among the highest in the nation. It has been rated as the wealthiest city in the United States by CNN Money[6] with a poverty rate of less than 6.4%. In 2008, Forbes.com selected Plano, University Park, and Highland Park as the three "Top Suburbs To Live Well" of Dallas.[7] The United States Census Bureau declared Plano the wealthiest city of 2008 by comparing the median household income for all U.S. cities whose populations were greater than 250,000.[8] The annual Plano Balloon Festival and the Plano International Festival are two of the city's premiere cultural and entertainment events. In October 2010, Forbes magazine named Plano the safest city to live in America with a population greater than 250,000.[9]

Settlers came to the area near present-day Plano in the early 1840s.[10] Facilities such as a sawmill, a gristmill, and a store soon brought more people to the area. Mail service was established, and after rejecting several names for the budding town (including naming it in honor of then-President Millard Fillmore),[11] the locals suggested the name Plano (from the Spanish word for "flat"), a reference to the local terrain. The name was accepted by the post office.[11] In 1872, the completion of the Houston and Central Texas Railway helped the city grow, and the city was officially incorporated in 1873.[11] The population grew to more than 500 by 1874.[10] In 1881, a fire raged through the central business district, destroying most of the buildings.[10][11] The town was rebuilt and business again flourished through the 1880s.

The population of Plano initially grew slowly, reaching 1,304 in 1900 and increasing to 3,695 in 1960.[10] By 1970, Plano began to feel some of the boom its neighbors had experienced following World War II. A series of public works projects and a change in taxes that removed the farming community from the town helped increase the overall population of Plano. In 1970, the population reached 17,872,[10] and by 1980, the population had exploded to 72,000.[10] Sewers, schools and street development kept pace with this massive increase, largely due to Plano's flat topography, grid layout and planning initiatives. The Plano Independent School District (PISD) was formed in 1975.[citation needed]

During the 1980s, many large corporations moved their headquarters to Plano, including J. C. Penney and Frito-Lay, which helped the city grow. By 1990, the population reached 128,713[10], dwarfing the county seat of McKinney. In 1994, the city was recognized as an All-America City.[12] By 2000, the population grew to 222,030,[10] making it one of the largest suburbs of Dallas. Plano is completely locked in by other municipalities and cannot expand in area, and there is little undeveloped land remaining within the city limits.

Among other sports accolades, Plano is home to the World Olympic Gymnastics Academy (WOGA), the training ground of 2004 and 2008 Olympic All Around Champions, Carly Patterson and Nastia Liukin. The gym is owned by Patterson's coach, Yevgeny Marchenko, and Liukin's coach and father, Valeri Liukin.

Media attention over suicide and heroin use among Plano students

Plano students achieved notoriety following a cluster of nine suicides in 1983 that raised national awareness about suburban teenage depression. Most of the suicides were committed by carbon monoxide poisoning, but some were the result of gunshot wounds. Plano students were again in the news in the late 1990s due to a city-wide heroin problem. The surge in heroin use was the focus of coverage by several major news outlets such as NBC's Dateline and MTV's "Wasted." Heroin use in Plano eventually led to more than a dozen overdose deaths of teenagers and young adults. Many non-fatal overdoses were reported. As a result, the Plano Police Department launched an undercover investigation known as "Operation Rockfest." The investigation led to 84 drug cases against 33 adults and four juveniles, including 14 students enrolled in Plano schools.[13]

In July 2003, Taylor Hooton, a student athlete at Plano West Senior High School, committed suicide. His family believed the suicide was connected to depression caused by the use of steroids used for performance enhancement. Much like the city's suicide and heroin issues of the 1980s and 1990s, this incident drew national focus to the issues of high school athletes and steroid use. Chris Wash was featured on the cover of the December 20, 2004, issue of Newsweek magazine wearing a Plano West Senior High School shirt in an article about the use of steroids in high schools. On March 10, 2005, Don Hooton (the father of Taylor) testified before a Congressional subcommittee about the use of steroids in high school. This event was widely covered, as several prominent baseball players, including José Canseco and Mark McGwire, also testified. This event was also covered in the critically acclaimed documentary Bigger, Stronger, Faster about steroid culture. 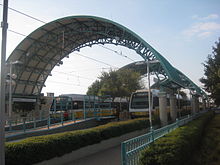 The tracks and adjacent platforms at the Parker Road DART station in Plano, Texas

Plano is one of 12 suburbs in the Dallas area that opts into the Dallas Area Rapid Transit (DART) public transportation system. During most of its membership in DART, Plano was lightly served by bus lines, but in recent years, the Red Line of the DART Light Rail project has opened stations in Downtown Plano and at Parker Road, which provide access to commuters traveling to work elsewhere in the Dallas area. Approximately 1% of the city's population uses DART.

Plano was the first city in Collin County to adopt a master plan for its road system. The use of multi-lane, divided highways for all major roads allows for higher speed limits, generally 40 mph (64 km/h), but sometimes up to 55 mph (89 km/h) on the northern section of Preston Road. Plano is served directly by several major roadways and freeways. Central Plano is bordered to the east by U.S. Highway 75, the west by Dallas North Tollway, the south by President George Bush Turnpike, and the north by Texas State Highway 121. Preston Road (Texas State Highway 289) is a major thoroughfare that runs through the city.

According to the city’s most recent Comprehensive Annual Financial Report, the city’s general fund had $194.0.million in Revenues, $212.3 million in expenditures, $277.5 million in total assets, $31.4 million in total liabilities, and $337.2 million in cash and investments.[14] The structure of the management and coordination of city services is:[15]

At the Federal level, the two U.S. Senators from Texas are Republicans John Cornyn and Kay Bailey Hutchison; Plano is part of Texas' US Congressional 3rd District, which is currently represented by Republican Sam Johnson.

According to the Plano 2010 Comprehensive Annual Financial Report,[16] the top employers in Plano are:

Approximately 80% of Plano's visitors are business travelers, due to its close proximity to Dallas and the many corporations headquartered in Plano. The city also has a convention center that is owned and operated by the city. Plano has made a concerted effort to draw retail to its downtown area and the Shops at Legacy in an effort to boost sales tax returns. The Shops at Legacy area has apartments, shops, and restaurants constructed with the new Urbanism philosophy.[17] An experimental luxury Walmart Supercenter is located at Park Boulevard and the Dallas North Tollway.[18]

Some of the country's largest and most recognized companies have their headquarters in Plano. Tree-lined Legacy Drive in the 75024 ZIP code, between Preston Road and the Dallas North Tollway, has many corporate campuses. The following companies have headquarters or major regional offices in Plano: 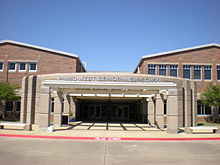 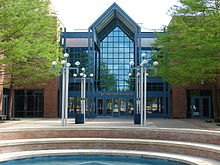 Entrance to the Spring Creek campus of Collin College in Plano, Texas

Plano is the home to two campuses of Collin College, one at the Courtyard Center on Preston Park Boulevard and the larger Spring Creek Campus on Spring Creek Parkway at Jupiter.[25] SMU-in-Plano, formerly SMU-in-Legacy, a branch of Southern Methodist University, is a graduate university serving the needs of 3,000 working professionals.[26] Its academic programs include business, engineering and computer training, education and continuing education. It also features The Guildhall at SMU, which offers a masters program in video game development.[27]

The following is a list of current residents of Plano, who have become famous outside of the community: