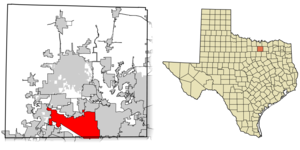 Flower Mound is a town in Dallas, Denton, and Tarrant counties in the of . The population was 50,702 at the 2000 census, although the 2006 estimate was 63,526. [cite web|url=http://factfinder.census.gov/servlet/SAFFPopulation?_event=Search&_name=Flower+Mound&_state=04000US48&_county=Flower+Mound&_cityTown=Flower+Mound&_zip=&_sse=on&_lang=en&pctxt=fph|title=2005 population estimate for Flower Mound|publisher=U.S. Census Bureau|accessdate=2007-02-20] The town derives its name from the prominent 12.5-acre mound located in the southern portion of the town which is covered by wild flowers. The most widely accepted explanation for the mound is that it was a sacred ceremonial ground of in the early 1800s. [cite web|url=http://www.dmagazine.com/ME2/dirmod.asp?sid=&nm=&type=MultiPublishing&mod=PublishingTitles&mid=7155F7796F354F21B1183937D847D6DF&tier=4&id=9B237214B5644E9391A92F31BCF65C0B|title=The Best Places to Live|publisher=D Magazine|accessdate=2008-03-18] Though surrounded by commercial and residential development, the mound is privately owned so as to be protected from further development.

Flower Mound has a small-town atmosphere with easy access to and the . It refuses to be referred to as a "city" despite its recent growth; it bills itself as the "Town of Flower Mound" with a "Town Hall" and a "Town Council".

Native American habitation of what eventually became Denton County dates back to at least , according to archaeological surveys by the . European settlement in the Flower Mound area is reported as early as the 1840s. Nineteenth-century settlers such as Andrew Morriss and David Kirkpatrick are still memorialized with street names in the town.

The town area remained sparsely populated for many decades after this initial settlement. Not until 1961 was the town incorporated to avoid annexation by the city of Irving. William Wilkerson, who became the town's second mayor, spearheaded the incorporation effort and helped improve the town's phone service and water supply.

As late as 1970, though, the town only numbered 1,685 residents. It was part of the 's failed "New Town" development scheme. However, the enormous expansion of Flower Mound began as part of the growth of the area north of the .

In 1990 there were slightly over 15,000 people living in Flower Mound and its population had tripled during that decade. [Hobson, Archie, ed., "The Cambridge Gazeteer of the United States and Canada" (New York: Cambridge University Press, 1995) p.217]

During the 1990s the town's population was growing at a rate of nearly 13% per year. Flower Mound was the nation's 10th fastest growing community during the 1990s - growing from 15,527 to 50,702. [cite web|url=http://www.flower-mound.com/smart/smartgrowth.pdf|title=Flower Mound SmartGrowth Management Plan|publisher=Town of Flower Mound|accessdate=2007-02-29] In 2000-2002, Flower Mound was ranked 9th among the 100 fastest growing cities in United States with a population greater than 50,000. [cite web|url=http://www.city-data.com/top32.html|title=Top 100 Fastest Growing Cities from 2000 to 2002 (pop. 50,000+)|publisher=City-data.com|accessdate=2007-02-20] This growth has led to efforts to limit further development in the town to maintain rural characteristics and a more natural environment.

In 1999, the town adopted the SMARTgrowth ( representing "Strategically Managed And Responsible Town Growth") management plan, a initiative to manage both the rate and character of development in the community. [cite web|url=http://www.flower-mound.com/smart/smartgrowth.pdf|title=Flower Mound SmartGrowth Management Plan|publisher=Town of Flower Mound|accessdate=2007-02-20] However, Flower Mound's population continued to rise by approximately 5% per year during the 2000-2005 period. The town also encourages projects to protect and preserve existing , vistas and natural habitats while allowing for controlled growth. The goal is environmentally sensitive urban development and the mitigation of the ill-effects of . While more controlled growth can be seen in the central and western portion of Flower Mound open space is still slowly disappearing. Traffic continues to increase on the two lane roads and highways in Flower Mound and especially in Northwest Flower Mound in the new retail district on the corner of FM 2499 Long Prairie RD and FM 407 Justin RD. Critics including former mayor Lori DeLuca charge that shopping centers, grocery stores, housing developments and other projects continue to replace rural land. [cite web|url=http://www.voters-united.com/|title=Voters United to Preserve Flower Mound|accessdate=2007-02-20]

Although physical geography is not greatly varied in North Texas, Lake Grapevine and Marshall Creek form much of the southern boundary of Flower Mound. The town borders Lewisville to the east and a number of cities and towns to the north, including Highland Village, Double Oak, and Bartonville. The two major highways in Flower Mound are s. FM 1171, known as Cross Timbers Road, runs east to west across the entire town. FM 2499 runs north to south and furnishes access to State Highway 121 and Interstate 635 just north of DFW Airport.

The town is mostly served by the . Other parts of Flower Mound are located in the and . The town is home to two high schools, Edward S. Marcus High School and the newer , both part of the Lewisville district. Private schools both within town limits and further out in D/FW, including Liberty Christian School, , Explorations Preparatory School, and , serve students from who seek private or religious education.

Flower Mound recognizes two areas of current economic development, the Lakeside Business District and the Denton Creek District. Over $25 million has been spent to provide the two business districts with transportation thoroughfares and other public improvements. [cite web |url=http://www.flower-mound.com/econdev/properties.html |title=Properties |accessdate=2008-06-20 |work=Town of Flower Mound Properties|date= ] Due to this spending and the town's proximity to the DFW Airport and major highways, many businesses have recently moved some local operations to the town, including , Stacy's Furniture, and .

Approximately 960 businesses are located in Flower Mound as of 2007

75% of Flower Mound's labor pool is in its , of whom 95% are employed. Thirty percent of the employed are engaged in management, business, and financial duties, twenty-eight percent in sales and office duites, and twenty-five percent in professional and related occupations.