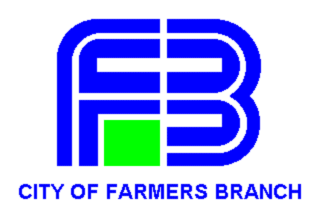 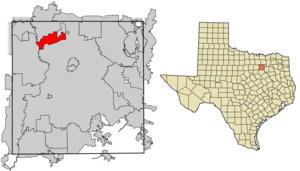 Farmers Branch is a city in Dallas County, (USA). The city is an inner-ring suburb of Dallas and is part of the . The population was 27,508 at the 2000 census. On , , voters in this Dallas suburb became the first in the nation to prohibit landlords from renting to most illegal immigrants. Enforcement of that ban is currently on hold pending the outcome of its legal battle.

There were 9,766 households out of which 32.1% had children under the age of 18 living with them, 56.5% were married couples living together, 9.8% had a female householder with no husband present, and 29.0% were non-families. 22.9% of all households were made up of individuals and 7.6% had someone living alone who was 65 years of age or older. The average household size was 2.80 and the average family size was 3.31.

Farmers Branch in the news

In November 2006, the city of Farmers Branch entered the national spotlight when its council became the first in Texas to pass anti-illegal immigration measures, proposed by Councilman Tim O'Hare, which include fining landlords that rent to illegal aliens, and allowing local authorities to screen illegal aliens in police custody. The measures also included a provision making English the official language of the city. The original discussions in August 2006 additionally considered punishing employers who hire illegal immigrants and eliminating subsidies for illegal immigrants in the city's youth programs.

On , , the referendum passed by a margin of 68% to 32% despite last-minute opposition from mayor Bob Phelps and many city employees. O'Hare spoke from the headquarters of the proponents of the bill, challenging anyone who might be thinking of filing a lawsuit to prevent the implementation of the ordinance with countersuits. He also said that Farmers Branch would be willing to take the case all the way to the Supreme Court if necessary. On the same day, voters elected to the City Council two candidates who had supported the measures.

On , , Judge Sam A. Lindsay of the U.S. District Court for the Northern District of Texas granted a temporary enjoining the city from enforcing the ordinance—one day before it was due to go into effect—until the court rules on several plaintiffs' motions for a permanent restraining order. [ [http://www.aclutx.org/article.php?aid=486 "Judge Grants Request for Temporary Restraining Order in Immigration Ordinance Challenge,"] "ACLU Foundation of Texas", May 21, 2007] [Stephanie Sandoval. [http://www.dallasnews.com/sharedcontent/dws/news/city/carrollton/stories/052707dnmetfbmood.345e38a.html Order to halt rental ban frustrates FB residents] , "The Dallas Morning News", May 26, 2007] Just prior to a hearing over the preliminary injunction, the same judge dismissed from one of the lawsuits a group of business plaintiffs who had said they suffered business losses and simultaneously denied the request of the national organization (FAIR) to participate in the lawsuit on behalf of the defendants.

Farmers Branch was one of fifteen cities to approve services of in 1983 by levying a 1 cent sales tax. The city currently receives DART bus service, with service to (by both regular route and express bus), the adjacent suburb of Carrollton and crosstown routes as well. By the year 2010, the city is scheduled to receive transit service with a station near the northeast corner of Interstates 635 and 35E on the DART G|style=nf, which will run from Pleasant Grove in southeast Dallas through following I-35E up to Carrollton at Frankford Road.

The City is also nestled between Interstate 35E to the west, the Dallas North Tollway on the east and Interstate 635 to the south.