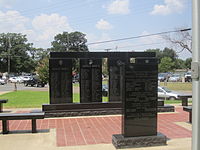 Navarro County is a county located in the U.S. state of Texas. As of 2000 census, the population was 45,124. Its county seat is Corsicana[1]. Navarro County is named for José Antonio Navarro, a Tejano leader in the Texas Revolution who signed the Texas Declaration of Independence.

The Corsicana Micropolitan Statistical Area includes all of Navarro County.

In 1860, after the election of Abraham Lincoln to the American presidency, Navarro County in protest lowered the American flag from the courthouse and instead hoisted the Texas flag. Thereafter early in 1861, some 450 Navarro County men enlisted in the new Confederate States of America army. Two of the enlistees became outstanding officers, Roger O. Mills and Clinton M. Winkler, a Confederate colonel for whom Winkler County in southwestern Texas is named. The county commissioners appropriated funds for weapons and ammunition and for the support of the soldiers' families.[2]

During the war. the Navarro Rifles constituted an 87-man Confederate infantry formed in July 1861 Corsicana from area volunteers. Clinton Winkler, a founder of Navarro County, served as the initial captain. The group trained near Dresden, Spring Hill, and later Waco and Harrisburg, Texas. The Navarro Rifles became Company 1 of the Fourth Texas Volunteer Infantry Regiment. In September 1861, the unit reached Richmond, Virginia. The men were placed under the command of General John Bell Hood.[3]

Navarro County is currently listed as part of the Dallas-Fort Worth DMA. Local media outlets include: KDFW-TV, KXAS-TV, WFAA-TV, KTVT-TV, KERA-TV, KTXA-TV, KDFI-TV, KDAF-TV, and KFWD-TV. Although also located geographically close to the Waco metropolitan area. Meaning all of the Waco/Temple/Killeen market stations also provide coverage for Navarro County. They include: KCEN-TV, KWTX-TV, KXXV-TV, KDYW, and KWKT-TV. One other station also provides coverage for Navarro County: KETK-TV from the Jacksonville/Tyler DMA.