Okanagan
This article is about the region in Canada. For other uses of the term, see Okanogan.

/oʊkəˈnɑːɡən/ ohk-ə-nah-gən), also known as the Okanagan Valley and sometimes as Okanagan Country is a region located in the Canadian province of British Columbia defined by the basin of Okanagan Lake and the Canadian portion of the Okanagan River. As of 2009, the region's population is approximately 350,927. The primary city is Kelowna. The name derives from the Okanagan language place name ukʷnaqín.[1] An alternate explanation from Washington proposes "People living where you can see the top", ostensibly of Chopaka Peak in the Lower Similkameen.[2] The region is known for its dry, sunny climate, dry landscapes and lakeshore communities and particular lifestyle. The economy is retirement and commercial-recreation based, with outdoor activities such as boating and watersports, snow skiing and hiking. Agriculture has been focused primarily on fruit orchards, with a recent shift in focus to vineyards and wine. The valley stretches from Sicamous, (where it merges with the Shuswap), to the US Border, where it continues as the Okanogan Valley. The Okanagan Region often includes the Boundary Country, Similkameen Country and Shuswap, as well as the Okanagan Valley itself.

The Okanagan Valley is home to the Okanagan people, an Interior Salish people who live in the valley from the head of Okanagan Lake downstream to near the river's confluence with the Columbia River in present-day Washington, as well as in the neighbouring Similkameen Valley, though the traditional territory encompasses the entire Columbia River watershed. They were hunter-gatherers, living off wild game and berries and roots for the most part but travelling north or south to fish salmon runs or to trade with other nations. Today the member bands of the Okanagan Nation Alliance are sovereign nations, with vibrant natural resource and tourism based economies. The annual August gathering near Vernon is a celebration of the continuance of Okanagan life and culture.

In 1811 the first non-natives came to the Okanagan Valley, a fur trading expedition voyaging north out of Fort Okanogan, a Pacific Fur Company outpost at the confluence of the Okanagan and Columbia Rivers. Within fifteen years, fur traders established a route through the valley for passing goods between the Thompson River region and the Columbia River for transport to the Pacific. The trade route lasted until 1846, when the Oregon Treaty laid down the border between British North America and the United States west of the Rocky Mountains on the 49th parallel. The new border cut across the valley. To avoid paying tariffs, British traders forged a route that bypassed Fort Okanogan via the Fraser Canyon, following the Thompson, Nicola, Coldwater and Fraser rivers to Fort Langley instead. The Okanagan Valley did not see many more outsiders for a decade afterward. 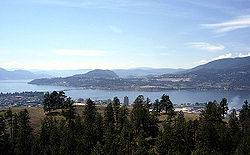 View of the Okanagan valley from the hills above Kelowna

In 1859, the first European settlement was established when Father Charles Pandosy led the making of an Oblate mission where Kelowna is now. In the decades that followed, hundreds of ranchers came to settle on Okanagan Lake. The Fraser Canyon Gold Rush of 1858 eventually encouraged more settlement as some prospectors from the United States took the Okanagan Trail route on their way to the Fraser Canyon, although at the height of the rush the American adventurers who used the route did not settle because of outright hostilities from the Okanagan people, whom a few of the parties traversing the trail had harassed and brutalized. A few staked claims around the South Okanagan and Similkameen valleys and found gold and copper in places. A mining industry began in the southern Okanagan region, and more farmers, as well as a small service industry, came to meet the needs of the miners.

Fruit production is a hallmark of the Okanagan Valley today, but the industry began with difficulty. Commercial orcharding of apples was first tried there in 1892, but a series of setbacks prevented the major success of commercial fruit crops until the 1920s. But until the 1930s, the demand for shipping fruit and other goods did drive a need for the sternwheeler steamboats that serviced Okanagan Lake: the S.S. Aberdeen from 1886 and then the S.S. Sicamous and S.S. Naramata from 1914. The Sicamous and Naramata survive as a tourist attraction in Penticton.

While the last half-century has grown several resource-based enterprises in the region, for instance forestry in Princeton, the fastest-growing industries in the Okanagan today are real estate, tourism and retirement accommodation as well as the ripping up of orchards and their replacement by wineries and vinyards.[citation needed] Favoured by its sunny climate, lakes, and winery attractions, the valley has become a popular destination for vacationers and retirees. The area also attracts seasonal fruit-picking labourers, primarily from Quebec and Mexico.[3][4]

Like much of Southern BC, the Okanagan receives a mild climate, although the Okanagan is considerably drier than many other areas. Areas in the north end of the valley receive more precipitation and cooler temperatures than areas to the south. Generally, Kelowna is the transition zone between the drier south and the wetter north. Vegetation also ranges from cactus and sagebrush in the south, to Cedar and Hemlock trees in the North.

A panoramic view of the Okanagan, near Penticton.

As defined for census purposes by Statistics Canada, the region has a total area of 20,829 km² (8,042 mi²) which is roughly two-thirds the size of Belgium.

The continued growth and operation of the agricultural industry in the Okanagan absolutely depends on the employment of temporary migrant workers.[5]