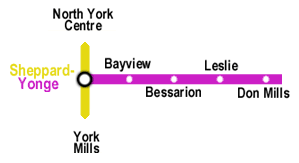 The Sheppard Line is the newest subway line in , , , operated by the . It currently has five stations and is 5.5 s (3.4 s) long. It opened on , . [cite web| url=http://www.toronto.ca/ttc/history.htm| title=Toronto Transit Commission - History| publisher=City of Toronto| accessdate=2007-11-22| ] It is internally numbered as Route 4, but this number is not shown on TTC maps, signs, or schedules and is rarely used or even known by the public.

The entire line runs under or near Sheppard Avenue East. All of its stations, whether by transfer or in the fare-paid area, connect to surface TTC bus routes. All stations have s for access, and ; noteworthy examples are the scenic mural at Sheppard-Yonge, the children’s logo at Bayview, and Leslie station’s tiles showing the words “Sheppard & Leslie” handwritten by each member of the public (totalling a few hundred).

The 385 Sheppard East bus provides late-night service when the subway is not in operation. This service terminates at Sheppard-Yonge Station and follows Sheppard Avenue to Meadowvale. Bus service is extended on Sundays because the subway and RT starts at 9:00 a.m. instead of the usual time of 6:00 a.m.

Leading up to the 1995 provincial election, the governing New Democratic Party proposed provincial funding for four subway/LRT projects for the Toronto Transit Commission (TTC). Included in these four proposals were plans to build new subway lines along Eglinton and Sheppard Avenues. Premier decided to spread the funding throughout Metro Toronto to appease residents of both sides, which would have resulted in two truncated subway lines instead of a single complete line.

Three of these proposals had their municipal funding rejected by metropolitan Toronto city council, causing the cancellation of any provincial funding for the projects and causing current work on the Eglinton line to be terminated immediately.

Funding for the Sheppard line originally was rejected by city council as well. However, after a number of votes on different alterations to the project (including only building the subway to Leslie Street), the proposal to build the Sheppard line tunnels only, without tracks, was passed by a narrow margin. After this vote passed city council, a revote was taken on the entire Sheppard line project to Don Mills which then passed by the narrowest of margins. Some believed that North York Mayor ’s political clout (he was later elected Mayor of the amalgamated City of Toronto) was crucial to the Sheppard Line proposal being implemented. The Downsview station was added to the Spadina line partially in anticipation of the Sheppard project westward extension.

The Sheppard subway is unusual in that it was the first “suburban” subway; the previous TTC lines had started from downtown Toronto. However, North York, especially around Yonge and Sheppard, has seen intense high-rise developments in recent years, giving it the nickname of the “new downtown” upon which other surrounding suburban areas were increasingly relying. The case for building the subway line was the existing TTC bus service could not handle the commuter capacity; full buses drove right past waiting crowds at bus stops. Although some suggested that expanding Sheppard Avenue to allow for dedicated bus lanes would have been much cheaper than a subway, it would be difficult to acquire the necessary right-of-way as Sheppard Avenue ran though a built-up Willowdale community. (By contrast, Eglinton West ran though a vacant corridor intended for the .) The new commuter parking garages at Don Mills were also intended to take the pressure off of the crowded Finch station.

Another reason was to alleviate the congested Highway 404– (DVP) route; while Highway 404 was widened by the province in 1999–2007, similar plans to expand the DVP were not approved by city council, and this would result in an inevitable bottleneck. The intention was that downtown-bound drivers would exit Highway 404 at Sheppard Avenue, and take the subway to avoid this choke point.

When the Sheppard line opened in 2002, it was the city’s first new subway line in decades. It is shorter than originally planned, running from (at the former Sheppard station, now renamed Sheppard-Yonge) east to rather than further west to Downsview station and southeast to Scarborough Centre station. The line will be extended only with substantial additional government funding.

The Sheppard line cost just under $1 billion and took eight years to build. It is the first subway line in Canada whose plain tunnel sections were built entirely by . All stations on the line are in cut-and-cover sections, and just east of Leslie station there is an enclosed bridge over the Don River (east branch). Additionally, the Sheppard line is the only subway line in Toronto not to have any open sections. Yonge Street had to be diverted for several years in order to accommodate the expansion of Sheppard Station; the temporary diversion of Yonge are now two vacant lots.

One of the ideas proposed for the Sheppard line was . Aligned at the edge of the platforms, platform screen doors would align themselves with the subway-car doors when in station for safety and prevention. The system was dropped on the account of cost.

Stations are built to eventually take the TTC's standard subway trains of six 23 m (75-foot) cars, but part of each platform has been blocked off since only four-car trains are needed to carry the amount of traffic the line currently receives. The line is designed so that it can be extended at both ends, allowing for the construction of the originally planned westward and eastward branches in the future. Extension is not currently a priority, however.

The automated system to announce each stop was installed in January 2006.

The line has been derided by critics as a “subway to nowhere” or a “stubway.” Apart from the Sheppard-Yonge and Don Mills terminals, its stations have received little use, even during . One significant but often overlooked problem is that the Sheppard line feeds into the already overcrowded Yonge-University-Spadina subway line, since the Sheppard line does not have its own train yard.

The suburban subway is also criticized because most of the surrounding population is more affluent and more likely to drive. The Don Mills station at Fairview Mall has also sparked further controversy because the commuter lot requires a fee even if one holds a monthly Metropass transit pass; the parking charge was required in order to prevent the limited garage space from being overwhelmed (the regular mall parking is cordoned off until the shopping centre opens).

To put this in perspective, the ridership on the Sheppard Subway is approximately 42,000 per average weekday, about the same as many of the TTC's busiest streetcar and bus routes. During the City of Toronto's 2008 budget crisis, the TTC considered shutting the line down on weekends or entirely.

The new subway, however, has spurred over $1 billion of construction of new housing, including several high-rise condominium towers, along its route. Particularly noteworthy are the condos around Bayview station, where none had previously existed prior to the 2000s. In addition, between Leslie and Bessarion stations, a former warehouse/distribution centre next to Highway 401 (the chain retains a store nearby) is being demolished and the land is being sold to Concord Adex Investments Limited of Vancouver. Plans are well underway to develop the large multi-condo complex, , which includes a community park. Concord Adex is also responsible for the CityPlace condo mega-development at the vacant lands, currently under construction west of the .

The Daniels Building Company has built a six tower development called NY Towers, Arc Condominiums on the northeast corner of Bayview/Sheppard, and terraced condos just east of their NY Towers. Shane Baghai has also built a multi-tower development in the area. All of this construction is a direct result of the subway being built.Or|date=September 2008

While it may be considered a 'subway to nowhere' it has generated massive development in the area. Time will tell whether or not it was a good investment.Or|date=September 2008

Neither extension is now considered a priority. In March 2007, the City of Toronto and the TTC released the proposal to begin a new round of transit expansion using light rail (streetcar) technology on dedicated rights-of-way instead of subway technology. The Sheppard East subway extension has been replaced in this plan by a light rail line running from Don Mills station along Sheppard Avenue East to Meadowvale, where it would meet the northern terminus of an extended line. Under this proposal, there would be no direct connection between the North York and Scarborough "city centres".

The following stations were included on the plan for the subway extension:

* Willowdale – between Sheppard-Yonge and Bayview