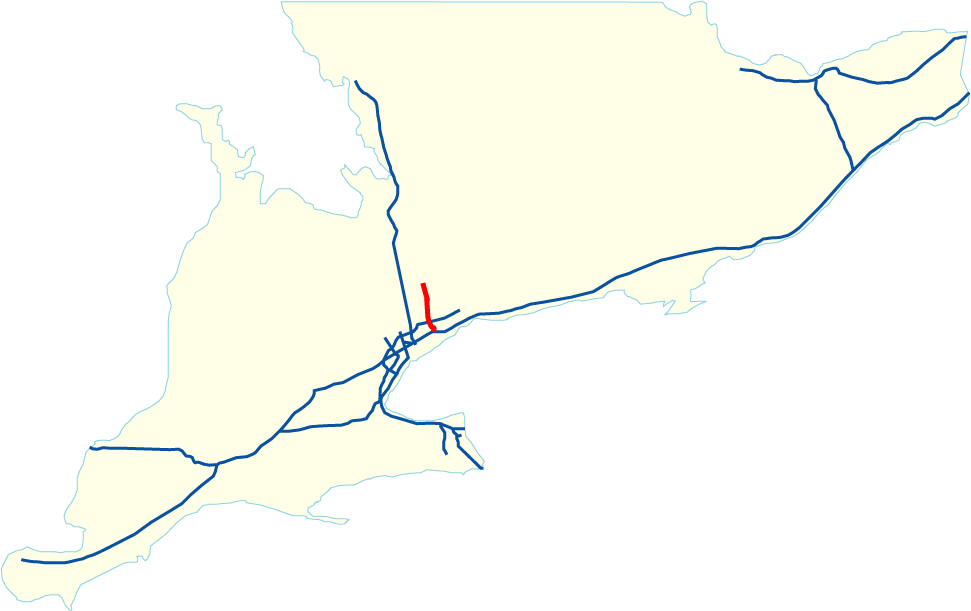 Highway 404 is a 400-Series Highway in , . It runs from the junction of Highway 401 and the in to its northern terminus at Green Lane/Herald Road in Newmarket. The highway mainly serves as a commuter road for those working in Toronto but living in the northern suburbs of the city. As it forms Toronto's only complete north-south freeway besides Highway 427, Highway 404 is among the busiest freeways for its size.

Originally an extension of the (DVP) and incorporating the routing of , Highway 404 became a provincial highway (and was completed by the Ontario Ministry of Transportation) in 1977.

The interchange with Highway 401 was built in the late 1960s along with the Highway 401 expansion project, and remains a major bottleneck especially for southbound traffic. As a result, people often compare the name of this highway to the s that occur on the Internet when traffic abruptly halts at a dead-end.

Initially, Highway 404 was completed from Highway 401 to with six lanes. At the time, it had features atypical of 1970s provincial urban freeways, notably its grass median with a steel box-beam barrier and its conventional shaded high-pressure sodium lighting system, rather than the more common metal guardrail and mercury truss lights. North of Steeles Avenue, Highway 404 became a four-lane rural freeway.

In the late 1990s, Highway 404 underwent a major reconstruction with the earliest projects centering around the new Highway 407 ETR. Subsequently, the grass median and conventional lighting system was replaced with a tall-wall concrete barrier, high-mast lighting, and two additional lanes per direction from Highway 401 to Highway 407. North of Highway 407, Highway 404 was widened to six lanes to Aurora Road, and the lighting system was extended to . Ramps serving 404 northbound were added to the existing partial interchange with 16th Avenue in 2002, and in 2003-2004, a new interchange was constructed with Elgin Mills Road.

Running parallel to Highway 400 approximately 15 s (9.5 mi) to the east, the 404 extends 36 kilometres (22 mi) north-south. The MTO plans to further extend the 404 north (and then east) to near the junction of Highways 12 and 48 (Beaverton area), to better serve commuters and to provide an alternate highway link into Ontario's "". On , the MTO announced plans to extend the highway 15 kilometres further north from Green Lane to Ravenshoe Rd. at the south end of Keswick. Construction is expected to commence sometime in 2008 with completion slated for 2011/12. This extension was confirmed by the MTO on , .

High occupancy lanes (HOV) similar to those on Highway 403 in Peel Region have been added to the 404, from Highway 7 at the Beaver Creek crossing to the interchange with Highway 401 and the DVP; further space in the grass median exists for their extension. The HOV lanes are the leftmost lanes of the freeway, with a buffer strip (not a concrete barrier or guardrail) to separate them from the regular lanes.

The first HOV Lane projects commenced in the late 1990s and involved the construction of the Highway 407 interchange and the widening of the Highway 7 junction to incorporate the HOV lanes, although the extra pavement was blocked off and remained unused for over five years.

The next stage of HOV construction was the widening the freeway from Highway 401 to just north of Steeles Avenue using the median, in 1999-2001, along with improved ramps from Highway 401 eastbound to Highway 404 northbound. The new left lanes served general purpose traffic for the interim, while the freeway from Sheppard Avenue to Steeles Avenue was widened using the right shoulder to provide additional lanes for general purpose traffic. Once this was completed, the leftmost lanes were converted to HOV lanes.

Construction of the southbound HOV lane began in early 2004 and was completed in December 2005. This project included a curved underpass tunnel to the Highway 401 westbound, and collector lanes were added to reduce the weaving from incoming Sheppard Avenue traffic and outgoing traffic to Highway 401. South of the Sheppard Avenue overpasses, the HOV lane becomes two lanes, with the leftmost lane leading to 401 westbound collector lanes via a curved tunnel, while the right HOV lane traffic merges with Don Valley Parkway southbound traffic.

The Highway 7 overpasses currently have an additional lane which is currently blocked off but will allow for northward expansion of the HOV lanes.

Lane configurations from south to north