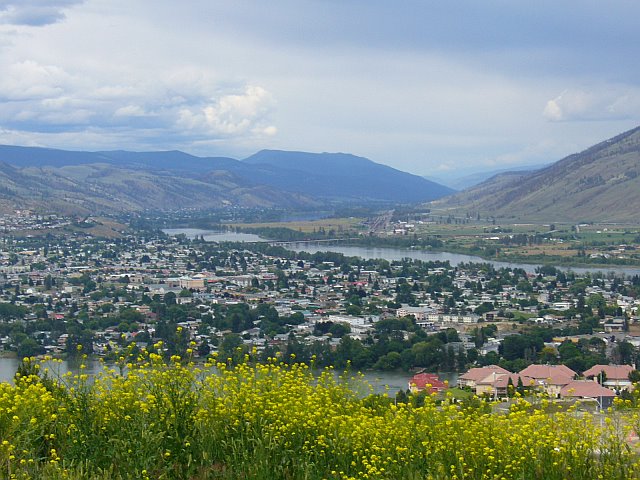 Kamloops is a city in south central , , at the confluence of the two branches of the and near . It is the largest community in the Thompson-Nicola Regional District and the location of the regional district's offices. The surrounding region is more commonly referred to as the . It is ranked 37th on the list of the 100 largest metropolitan areas in Canada with 92,882 residents in 2006.

Kamloops is situated at 50°43'N 120°25'W, in the Thompson Valley (UTC-8) and the "Mountain Cordillera Ecozone". The central core of the city is located in the valley near the confluence of the North and South branches of the Thompson River. Suburbs stretch for more than a dozen kilometers along both North and South branches, as well as to the steep hillsides along the south portion of the city. areas begin just to the northeast of the downtown core but are not located within the city limits. As a result of this placement, it is necessary to leave Kamloops' city limits and pass through the band lands before re-entering the city limits to access the communities of Rayleigh and Heffley Creek. Kamloops is surrounded by the smaller communities of Cherry Creek, Pritchard, Savona, Scotch Creek, Adams Lake, Chase, Paul lake, Pinantan and various others, many of which are included in the Thompson-Nicola Regional District (TNRD).

The Kamloops area was exclusively inhabited by the (Shuswap) nation (part of the language group) prior to the arrival of European settlers. The first European explorers arrived in 1811, and David Stewart set up Fort Kamloops, a fur trading post, on the south side of the river junction for the in 1812. The quickly established Fort Thompson on the northeast side of the junction, and the following year the Pacific Fur Company left the area. In 1821, the merged with the North West Company and took control of the fur trade at Fort Thompson. In 1842, a new Fort Kamloops was built on the northwest side of the junction.

The gold rush of the 1860s and the construction of the in the 1880s brought further growth, resulting in the City of Kamloops being incorporated in 1893 with a population of about 500.

"Kamloops" is the anglicised version of the Shuswap word "Tk'emlups" , meaning 'meeting of the waters'. Shuswap is still actively spoken in the area by members of the . Another possible origin of the name comes from the French "Camp des loups" meaning 'Camp of Wolves', likely spoken by fur traders.

Major Kamloops-area industries include primary resource processing such as Kamloops' Pulp Mill, Tolko-Heffley Creek Plywood and Veneer, LaFarge Cement, Highland Valley Copper Mine (in Logan Lake), and various other industries. There are tertiary services as well, such as the British Columbia Lottery Corporation and Pollard Banknote (which makes the lottery tickets) and NRI distribution, among many others. Kamloops is also a transportation hub for the region due to its connections to Highways 5 and 97C, the Trans-Canada and s. It is the first major city east of Abbotsford on the highway. Kamloops is home to , which is a small international airport: however, there are constituent pressures to accommodate larger aircraft. Due to a persistent disagreement between the City's federal Liberal Party Mayor, Terry Lake, and the area's Conservative Member of Parliament, Betty Hinton, there is no federal funding available for the airport's expansion. [http://www.kamloopsthisweek.com/portals-code/list.cgi?paper=15&cat=23&id=815131&more=1] Update: the federal government has agreed to fund their share of the airport expansion. Update: Construction of the Kamloops airport expansion began in late July, 2008 There has also been speculation of an inland rail port.

The climate of Kamloops is a steppe climate ( "BSk") due to its location. While situated in a semi-arid valley, Kamloops has winters that are generally mild and very short with an occasional cold snap where temperatures can drop to around -30 °C (-22 °F) when arctic air floods over the into the interior. However Kamloops has not seen -30 since the mid 1990sFact|date=May 2008. Snow can occur from November to March, but most of it falls over a few weeks in December and January. Winter mean temperature is -6.1 °C (20 °F) in January. The average number of cold days below -20 in one year is 6 as recorded by the government of B.C.

Perhaps surprisingly, considering that Kamloops is located at 50° latitude north, summers are quite hot with prevailing dry, and sunny weather. The average July maximum temperature is 28.3 °C (83 °F) and would be higher if not for occasional incursions of cool northerly airmasses. In most years, Kamloops can experience warm weather similar to that in southern ,fact|date=October 2008 as summer temperatures come close to or even exceed 40 °C (104 °F). is generally very low and night time temperatures are moderate.

Spring arrives very early, sometimes in February, due to mild air spilling over the coastal mountains from the Pacific Ocean. On February 27th 2008 Kamloops recorded 15.1 °C (60°F). Fall is generally a pleasant and a mostly dry season. On November 15th 2007 Kamloops recorded a day time high of 18.1 °C (65°F).

Kamloops lies in the "rain shadow" leeward of the and is biogeographically connected to similar semi-desert and desert areas in the region, the area, and the central parts of and state as well as intermontane areas of and in the U.S. These areas of relatively similar climate have many distinctive native plants and animals in common, such as ("Pinus ponderosa"), big sagebrush (""), cactus ("Opuntia fragilis" in this case), ("Crotalus viridis"), and .

is a nearby ski and snowboard hill. Olympic medalist skier is director of skiing at Sun Peaks and the chancellor of . The Overlander Ski Club runs the Stake Lake cross country ski area with 50 km of trails. Kamloops is home to world-famous mountain bikers such as and Matt Hunter [ [http://www.specialized.com/bc/SBCWhatsNewDetail.jsp?article=5032&refp=TeamFreeride Specialized.com] ] . In 2007, the opened in along Highland Drive. The Kamloops Rotary Skatepark located at McArthur Island is one of the largest skateboard parks in Canada.Fact|date=August 2007 Kamloops will host the 2011 .

Kamloops is home to the 's , who play at the , the 's Kamloops Junior B Rattlers, as well as the . Also calling Kamloops home is the 's , and 's , both of whom play at .

Below is a list of people who are from Kamloops, or who lived there for an extended period.

More recently, the city's name was adopted for a crater on the surface of Mars.Crater Kamloops was officially adopted by the International Astronomical Union, andWorking Group for Planetary System Nomenclature (IAU/WGPSN) in 1991.The location of the crater on the Martian surface is -53.8 degrees South Latitudeand 32.6 degrees West Longitude, with a diameter of 65.0 Kilometers. 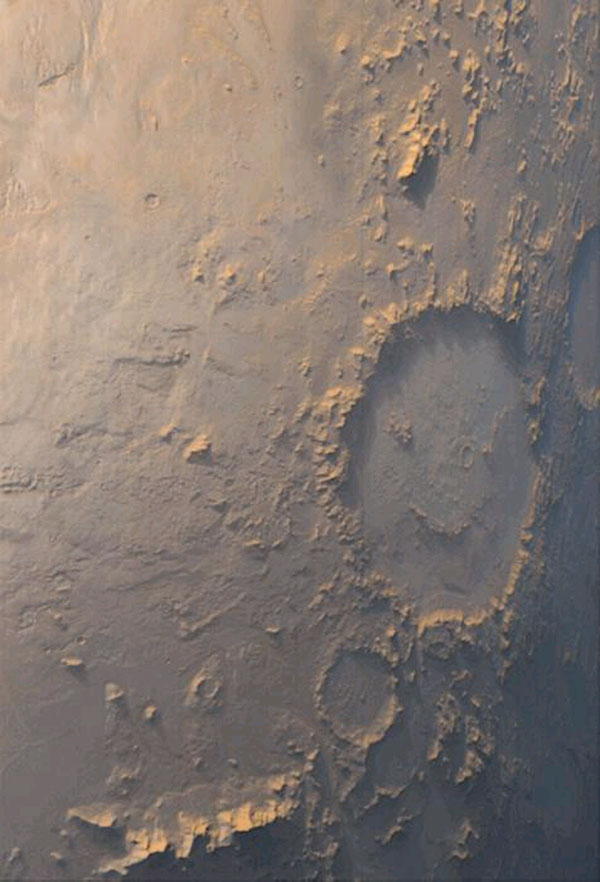