Lillooet (IPA: /ˈlɪloʊ.ɛt/, (formerly Cayoosh Flat[1]) is a community on the Fraser River in western Canada, about 240 kilometres (150 mi) up the British Columbia Railway line from Vancouver. Situated at an intersection of deep gorges in the lee of the Coast Mountains, it has a dry climate- 329.5 millimetres (13 in) of precipitation is recorded annually at the town's weather station, although nearby microclimates (some within a few hundred metres of the station) receive less than 50 mm (2 inches) of precipitation over small patches of benchland flanking the river adjacent to town.[citation needed] Lillooet has a long growing season, and once had prolific market gardens and orchard produce. It often experiences extremely hot summers with shade temperatures more than occasionally topping 40 °C (104 °F) and it often vies with nearby Lytton for the title of "Canada's Hot Spot" on a daily basis in summer.

Current population of the town proper as of the 2006 Census is 2,324, with another 5,000 in the surrounding region for which Lillooet serves as the commercial and social "downtown".[2][3] The regional population includes that of the three large bands of the St'at'imc or Lillooet Nation whose reserves abut the town on all sides, and another three large reserves within 20 miles (32 km); 430 of the District of Lillooet's population are aboriginal.[2] Historical populations have included large numbers of Americans and Chinese, although there are few of either today (although many longtime local families, First Nations and non-First Nations, have some bloodlines from both).[4] The town's non-native population has been historically multi-ethnic in extraction, with a relatively high-rate of intermarriage between all groups.

Its economy is based around logging, the railway, ranching, farming, and government services. The town has had several booms and busts, relying on forestry since the mid-1970s although previous booms were connected with Fraser Canyon and Cariboo Gold Rushes, the building of the Lillooet Cattle Trail, another gold rush adjacent to town in the 1880s and another nearby in the Pacific Great Eastern Railway, and spinoffs from the development of the Bridge River goldfields from the 1910s onwards. Lillooet's economy also boomed in the 1940s and 50s during the construction of the Bridge River Power Project, which includes a dam, canal and powerhouse on the outskirts of town. 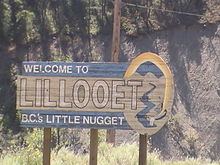 Lillooet is an important location in native history and culture and remains one of the main population centres of the St'at'imc (Lillooet Nation), and today it is one of the southernmost communities in North America where indigenous people form the majority. Just over 1/2 of the people in Lillooet and area are St'at'imc. Considered to be one of the oldest continuously inhabited locations on the continent, the area is reckoned by archaeologists to have been inhabited for several thousand years. The immediate area of the town attracted large seasonal and permanent populations of native peoples because of the confluence of several main streams with the Fraser and also because of a rock-shelf just above the confluence of the Bridge River which is an obstacle to migrating salmon.

This rock shelf, known in gold rush times as the Lower Fountain, was reputedly made by the trickster Coyote, leaping back and forth across the river to create platforms for people to catch and dry fish on. This location, named Sat' or Setl in the native language and known as the Bridge River Rapids or Six Mile in English, is the busiest fishing site on the Fraser above its mouth and there are numerous drying racks scattered around the banks of the river canyon around it.[5] 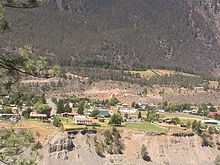 The Hop Farm neighbourhood in Lillooet.

The town had its start as one of the main centres of the Fraser Canyon Gold Rush of 1858–59, during which it was reckoned to be "the largest town west of Chicago and north of San Francisco", a title also held by certain other towns in British Columbia in rapid succession (Yale first, Barkerville after). Just after this gold rush, the town's layout as it is today was surveyed by the Royal Engineers and its Main Street tied into the original Cariboo Wagon Road or Old Cariboo Road to Fort Alexandria, a huge project undertaken as a toll road by Gustavus Blin Wright, one of the many entrepreneurial personalities of the early colony. Much of its tortuous canyon-brink road grade for twenty or thirty kilometres from "Mile 0" remained in use until the 1970s. The route via the lakes to Lillooet and up Blin Wright's wagon road to the Cariboo goldfields was outflanked within a few years by the now-better known Cariboo Wagon Road via a shorter and less portage-intensive route from Yale to Barkerville via Ashcroft a few years later. Lillooeters still, however, consider their town to be "Mile 0" of the original Cariboo Wagon Road, and it is true that the numbered roadhouse names of the Cariboo district are measured from the bend in Main Street, where a cairn was erected in 1858 to commemorate this fact. The first stretch of Main Street north from the cairn is said to point due north and at one time was called "the Golden Mile" partly because of all the gold dust reputed to be scattered along it in its heyday, and also because it was the hub of supply for the surrounding goldfields.

Lillooet was originally named Cayoosh Flat, a name that was felt to be unsavoury by the residents of the town at the time of its incorporation in 1860. Since it was at the end of the Lillooet Trail, aka the Douglas Road or Lakes Route, and the Lil'wat native people farther southwest along that route spoke the same language as the native bands near town, the governor was petitioned to change the name to Lillooet, with permission for use of the name granted by the chiefs of the Lower St'at'imc at Mount Currie (Lil'wat) and agreed to by the bands of what is now the Upper St'at'imc.

There have been a series of gold rushes in the surrounding region since the original one, including a large hard-rock one in the upper Bridge River Country which began in the 1880s and 1890s but had its peak from the 1930s to the 1950s, focussed on two main mining towns at Bralorne and adjacent Pioneer Mine and that area's main base town of Gold Bridge. Gold mining and prospecting continues in the area to this day, as do prospects for copper, silver and nephrite jade, though not to the same extent. Until the discovery of even larger deposits of jade near Cassiar, the Lillooet area was the world's largest source of the nephrite form of jade. Unknown tonnes were exported to China before government assayers discovered the nature of the "black rocks" that the Chinese miners found so interesting.

In the 1950s, local farmer and teacher Ron Purvis adapted the skil-saw concept by implementing a diamond rotary blade. This enabled the carving of the many immense jade boulders which line the banks and bed of the Fraser and Bridge Rivers, which were on the one hand immovable and on the other would shatter or striate if blasting was used to break them. Purvis' innovation was revolutionary in the jade mining business and larger versions of his saw are at use in the Cassiar region. There are no major commercial jade mines in the Lillooet area today, although local shops still carry polished jade souvenirs.

The Golden Cache Mine located on Cayoosh Creek just West of Lillooet was believed to hold one of the richest ore bodies of gold until lack of results ended investment, though it started a local prospecting boom with various miners and companies continuing the search for rich veins around the region. Most in town for the "Golden Cache boom" headed for the Klondike or Atlin by 1900.[6][7]

There are a number of Japanese-Canadian families in Lillooet today who are descendants of those who remained in the area after their forced relocation to Lillooet and other nearby camps at Shalalth, Minto City and McGillvray Falls during World War II.

One of the relocated Japanese, Dr. Masajiro Miyazaki, an osteopath who was enlisted by local police during the war to serve as a replacement for the town's deceased coroner and who became the region's de facto general practitioner and "bush doctor", is one of the town's two Companions of the Order of Canada. Dr. Miyazaki's Lillooet residence, the Miyazaki House, is still open for tours of the doctor's office (which has been preserved as he left it).

Lillooet's other Order of Canada winner was Margaret Lally "Ma" Murray, a Kansas-born farmgirl who moved to Vancouver before World War I and wound up marrying her employer, publisher George Matheson Murray, of Canadian establishment stock. They moved to Lillooet in 1931 when George campaigned for the town's seat in the provincial legislature, and launched the once-famous Bridge River-Lillooet News (now the Lillooet News). The paper was known for Ma's saucy wit, daring opinions and spicy language and Ma became closely identified with the town. She was, perhaps, the source of the town's greatest renown.

(Including non-residents who are somehow connected with Lillooet's history, or who lived in town for a while at least)