Roads and freeways in metropolitan Detroit

Roads and freeways in metropolitan Detroit 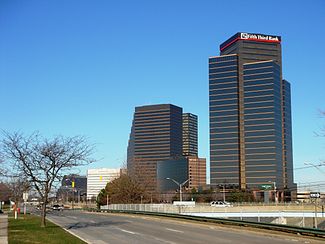 View of southbound lanes of Northwestwestern Highway in Metro Detroit passing beside John C. Lodge Freeway M-10 which is sunken below street level in front of the Southfield Town Center. 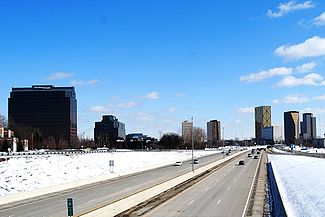 The Roads and freeways in metropolitan Detroit comprise the main thoroughfares in the region. The freeways consist of an advanced network of interconnecting freeways which include Interstate highways. The Metro Detroit region's extensive toll-free expressway system, together with its status as a major port city, provide advantages to its location as a global business center.[1] There are no toll roads in Michigan.[2]

Traditionally, Detroiters referred to their freeways by name rather than route number. That is still true today, with many Detroiters calling the freeways by their names, but numbers are in use as well. Other freeways are referred to only by number as in the case of I-275 and M-59: their names, if any, were never in common everyday usage. M-53, while not officially designated, is commonly called the Van Dyke Expressway. Detroit area freeways are typically sunken below ground level to permit local traffic to pass over the freeway.[3] 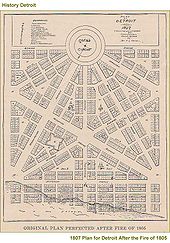 Following a historic fire in 1805, Justice Augustus B. Woodward devised a plan similar to Pierre Charles L'Enfant's design for Washington, D.C. Detroit's monumental avenues and traffic circles fan out in a baroque styled radial fashion from Grand Circus Park in the heart of the city's theater district, which facilitates traffic patterns along the city's tree-lined boulevards and parks.[4] The 'Woodward plan' proposed a system of hexagonal street blocks, with the Grand Circus at its center. Wide avenues, alternatively 200 feet (61 m) and 120 feet (37 m), would emanate from large circular plazas like spokes from the hub of a wheel. As the city grew these would spread in all directions from the banks of the Detroit River. When Woodward presented his proposal, Detroit had fewer than 1,000 residents. Elements of the plan were implemented. Most prominent of these are the five main "spokes" of Woodward, Michigan, Gratiot, Grand River and Jefferson Avenues.

The Mile Road System in Metro Detroit and Southeast Michigan facilitates ease of navigation in the region. It was established as a way to delineate east–west roads through the Detroit area and the surrounding rural rim. The Mile Road system, and its most famous road, 8 Mile Road, came about largely as a result of the Land Ordinance of 1785, which established the basis for the Public Land Survey System in which land throughout the Northwest Territory was surveyed and divided into survey townships by reference to a baseline (east–west line) and meridian (north–south line). In Southeast Michigan, many roads would be developed parallel to the base line and the meridian, and many of the east–west roads would be incorporated into the Mile Road System.

The Mile Road System extended easterly into Detroit, but is interrupted, because much of Detroit's early settlements and farms were based on early French land grants that were aligned northwest-to-southeast with frontage along the Detroit River and on later development along roads running into downtown Detroit in a star pattern, such as Woodward, Jefferson, Grand River, Gratiot, and Michigan Avenues, developed by Augustus Woodward in imitation of Washington, D.C.'s system. As Detroit grew, several Mile Roads were given new names within the city borders, while some roads incorporated as part of the Mile Road System have traditionally been known by their non-mile names. It is unclear if they ever bore mile numbers formally.

The baseline used in the survey of Michigan lands runs along 8 Mile Road, which is approximately eight miles directly north of the junction of Woodward Avenue and Michigan Avenue in downtown Detroit. As a result, the direct east–west portion of Michigan Avenue, and M-153 (Ford Road) west of Wyoming Avenue, forms the "zero mile" baseline for this mile road system.

The precise point of origin is located in Campus Martius Park, marked by a medallion[5] embedded in the stone walkway. It is situated in the western point of the diamond surrounding Woodward Fountain,[6] just in front of the Fountain Bistro. 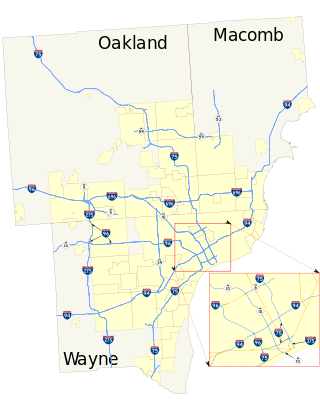 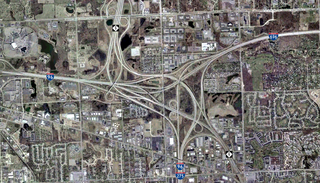 Satellite image of the terminus at I-275 nicknamed the "mixing bowl."

The mile roads that cross through Wayne County are designated as follows:

Note that the 0-4 Mile roads are not signed and never referred to as Mile Roads; it remains unclear if they were ever signed as Mile Roads. There is a Three Mile Drive in the far eastern portion of Detroit and going into Grosse Pointe Park, but it is unclear if this was ever intended to be a part of the Mile Road System. 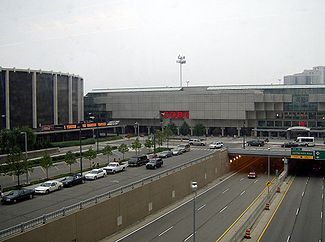 View of the Lodge Freeway (M-10) passing underneath the Cobo Center in downtown Detroit.

Note: On Detroit's far east side, which is aligned according to the French colonial long lot system rather than the Northwest Ordinance survey grid, Cadieux, Moross, and Vernier Roads are not extensions of 6 Mile Road, 7 Mile Road and 8 Mile Road, respectively. East McNichols (6 Mile) ends at Gratiot Avenue, with traffic continuing to Cadieux two miles (3 km) away via Seymour Street and Morang Drive. East 7 Mile Road ends as a short four-lane one-way side street at Kelly Road, two blocks east of where Moross veers off from 7 Mile, taking most traffic with it. Most traffic on 8 Mile Road continuing east of Kelly Road veers onto Vernier Road; 8 Mile continues as a side street eastward for a short distance past Harper Avenue. This is a common misconception by residents of Detroit, Harper Woods and Grosse Pointe, as Cadieux, Moross and Vernier appear to be extensions of their mile-road neighbors, but are in fact roads in their own right.

In the city of Detroit, residents only refer to 3 of the mile roads; 6, 7, & 8 Mile. 6 Mile Road is signed as "McNichols" throughout the city of Detroit, but is often referred to as "6 Mile" by residents. 5 Mile road, on the other hand, is almost always referred to as "Fenkell" (which is how it is signed in Detroit), and only very rarely as "5 Mile". The dual naming of McNichols is an occasional source of confusion to out-of-town travelers.

Although not signed as such, Detroit also has roads along half-mile gridlines:

Few of the mile roads continue west into Livingston County.

The mile roads in the southernmost part of Oakland County are known only by their numbers. From 15 Mile Road northward, however, all mile roads have local names, sometimes several. And like Macomb County and Detroit, some roads are placed at half-mile intervals.

Through Macomb County, most of these road names are not carried over, and nearly all of the Mile Roads are known by their mile numbers. One notable exception is Hall Road, which is part of M-59 and almost never referred to as 20 Mile Road. 16 Mile Road is never referred to that either as it is known as Metropolitan Parkway in Macomb County.

Note: there were some roads listed as xx-half Mile Roads, and placed in between the roads, such as 13 Mile Road, 131⁄2 Mile Road, 14 Mile Road, in that succession for example. Some are signed as such.

Through St. Clair County, most of these mile number names are not carried over, and nearly all of the Mile Roads are known by their road names.

The system continues uninterrupted in sequence up to 38 Mile Road, on the Macomb County / Lapeer County boundary near Almont, MI and Van Dyke Road (M-53). However, although not signed as mile roads, major roads still lie at one-mile (1.6 km) intervals for several miles into Lapeer County.

Locally, 8 Mile Road is considered the political and social dividing line between the city of Detroit and its northern suburbs. (It marks most of the northern boundary of both Detroit and Wayne County.) In 2002 this local notoriety was promoted to international attention, reflected in the name of Eminem's acclaimed film, 8 Mile.

The alignment for 16 Mile Road through Oakland and Macomb Counties is composed of four named roads:

Walnut Lake Road turns slightly southward in West Bloomfield and runs parallel to Quarton Road .5 miles (0.80 km) to the south, between Inkster and Franklin Roads. West and East Quarton Roads are disconnected slightly by Telegraph Road due to Gilbert Lake.

With a few exceptions, one can determine which mile roads an address is between on major north–south roads north of Five Mile/Fenkell by using the formula:

In the early days of addresses in the area, surveyors calculated position on the grid of mile roads to define addresses. The resulting system, sometimes referred to as the Detroit Edison system, generally assigns 2000 addresses to each mile. (There are often gaps in the numbering; for instance, East addresses 9000 to 10999 are skipped). Addresses in the Detroit area tend to be much higher than in other large cities, with numbers in the 20000's common within the city limits and in the inner-ring suburbs. Typically, addresses of single family homes on adjacent lots on the grid system, both within Detroit and in the suburbs, are incremented by 8, 10, 12 or more rather than by 2 as is the case in most other large cities in the United States.

The highest addresses used in the Detroit system are the range 79000 to 80999, for north–south roads beyond 37 Mile Road in northern Macomb County, and from 81000 to the high 81900’s in the portion of the city of Memphis, MI that bulges ~0.5-mile (0.80 km) into St. Clair County. For many years, the Guinness Book of Records incorrectly listed 81951 Main St (aka M-19) in Memphis as the highest street address number anywhere, but much higher numbers appear in Topaz, CA, Key Largo, FL, and Grey County, Ontario addresses.

The grid continues south of Ford Road, although not numbered as part of the Mile Road System. None of these roads connect to Detroit. Further south and west, and along Downriver, the roads tend to fall off the grids more often, for several reasons, including their closeness to the state of Ohio and natural features preventing straight road building.

In Wyandotte, residents refer to the names of Goddard, Northline, Eureka and Pennsylvania. Northline is signed as "Ford" throughout the city, but is referred by residents as "Northline". Northline's dual naming in Wyandotte is a likely source of confusion for out-of-town visitors.

There are many roads through Wayne, Oakland, Macomb and even Monroe counties that parallel the Michigan Meridian, creating a grid-type system. Like the east–west Mile Road System, the north–south grid roads lose cohesion to the grid in much of Detroit, and in the lake-filled areas of Oakland County.

Irregularities in the gridline alignment

There are some notable irregularities to the gridline system as described above. This is similar to enclaves and exclaves in terms of geographical discrepancies.

This section covers irregularities involving areas where an east–west and north–south road would otherwise intersect. All roads involved with a domino effect will be involved in a single summary.