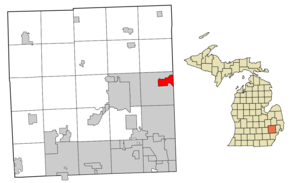 Rochester has great natural beauty due to the three waterways that surround the city, abundant green space of three parks, and two winding nature trails. Residents can enjoy fishing in the Clinton River or biking along the Paint Creek Trail.

In 2005, Rochester was named in the top 100 of "Best Places to Live" in the CNN/Money survey of Great American towns.

The first settlers in what would become Rochester, the Graham family, built a log cabin in 1817. The cabin was located where the "Quik-Pik & Penn Station" store is at the intersection of Main and Second Street.

One of the founding families, the VanHoosen family, are the most famous settlers of Rochester, MI. Their house, located in VanHoosen park, is still standing today. Many tourists come to take a tour inside the house and around to their barn.

The city was named for .

The city became an industrial center with abundant waterpower from the and Paint Creek. Rochester was served by two railroads as well as the , a passenger trolley to Royal Oak and .

Chapman Mill Pond, east of downtown, disappeared into the Paint Creek when the dam broke during the flood of 1946. The reclaimed land is the site of the current post office, library, and Olde Town Road.

There were 4,667 households out of which 27.6% had children under the age of 18 living with them, 47.9% were married couples living together, 6.3% had a female householder with no husband present, and 43.5% were non-families. 36.8% of all households were made up of individuals and 7.6% had someone living alone who was 65 years of age or older. The average household size was 2.22 and the average family size was 3.00.

The City of Rochester is governed by a city manager and has a mayor and a seven-member city council. The government provides full city services, including police, fire and water/sewer services, although newer developments in the eastern part of the city utilize the Detroit city water system.

Rochester Community Schools is the public school district encompassing Rochester and surrounding areas. As of 2007, a total of 14,500 students receive instruction in the district, which has four high schools: Rochester High School, , and A.C.E. High School.

* "Paint Creek and Clinton River Trails" - City is at the cross section of two major "Rails-to-Trails" projects: the Paint Creek Trail and Clinton River trail. These trails are used for recreational activities, like biking and walking. They connect to several major parks, including Bloomer Park, Rochester Municipal Park, Stoney Creek Metropark and the Dinosaur Hill Nature Preserve.
* "Paint Creek Center for the Arts" - The Paint Creek Center for the Arts is a community non-profit art center providing studio art classes for children and adults, and a year-round exhibition of fine art.
* "Rochester Avon Recreation Authority" - The Rochester Avon Recreation Authority (RARA) has been a recreation provider to Rochester and Rochester Hills since 1946. It provides recreation programs from 12 months to adults in a variety of areas, such as dance, sports classes, sport leagues, pre-school classes, special events, fitness, skiing, etc.
* "Older Persons Commission" - The Older Persons Commission provides social and educational activities, nutritional meals, senior resource services, as well as health and wellness programs to community members 60+ years of age, in a new state-of-the art facility built in 2002.
* "Farmer's Market" - The Farmer's Market takes place every Saturday, May through October, in downtown. It features fresh produce, flowers, handmade goods and other products from Michigan.
* "City Festivals" - Several festivals take place in downtown: Dancing in the Streets (August), Music in the Park (Thursdays in summer), Arts and Apples Festival (Fall), and the Heritage Festival (Memorial Day Weekend).
* "Hometown Christmas Parade" - The city has held the annual "Rochester Hometown Christmas Parade" since 1951. It features over 100 units, and since 2003 has been broadcast on local Detroit television station .
* "Big, Bright Light Show" - In 2006, the city had its first "Big, Bright Light Show" for the Christmas season. The downtown businesses were covered in 500,000 individual lights. A panoramic view can be seen here: [http://www.greatlakesap.com/recent/panos/rls.html http://www.greatlakesap.com/recent/panos/rls.html] . Also aired by .
* "Avon Players Theatre" - Avon Players is a nonprofit community theater group located only two miles from the heart of downtown Rochester. Avon Players performances included award-winning dramas, British farces, Broadway musicals, and spine-tingling mysteries. [ [http://www.avonplayers.com Avon Players Theatre] ]

Established in 1817, Rochester was one of Oakland County’s first settlements. Twenty two buildings on Main Street are more than 50 years old, and several are on the State Register of Historic Places.
* "Rollin Sprague Building" - The oldest building in the downtown is the Rollin Sprague building, built in 1849 of coursed cobblestone. Since 1930 it houses "The Home Bakery".
* "Opera House" - The Opera House Building opened on November 8, 1890 as the social and cultural center of town. It featured movies, lectures, dances, commencements, etc, until 1933. Refurbished in 1987, it houses Lytle Pharmacy today.
* "Rochester Grain Elevator" - Located at the corner of University Drive and Water Street, is the Rochester Grain Elevator (originally named Griggs Grain Elevator), a red barn built in 1880. Until the 1970s, farmers brought their grain to the elevator to be shipped to Detroit. After that time, its primary use has been as a supply store.
*"Royal Park Hotel" - In September 2004, the Royal Park Hotel, a four-star, four-diamond luxury hotel, opened in downtown Rochester. It cost $43 million to build. Several celebrities have stayed there.
* "Western Knitting Mills" - The Western Knitting Mills, a large brick building on Water Street, was built in 1896. At one time, it's output of 100,000 dozen pairs of gloves annually made it one of the largest glove producers in the world. Today the mill is fully restored, and home to The Rochester Mills brewery restaurant and several businesses.
* "VanHoosen Home" - located near Letica Rd, VanHoosen house is a living museum to show residents and tourists alike the life back in the 1800s.

* Madonna, singer and entertainer graduated from in 1976. She was chosen for induction in the Rock And Roll Hall Of Fame for 2008. She also attended Holy Family Regional School and West Middle School.
* , Olympic swimmer graduated from in 2002. He won a gold medal at the in the 4x200 free style relay. In the 2008 Beijing Olympics, Vanderkaay won the bronze medal in the 200m freestyle and the gold medal in the 4x200m freestyle relay.
* Paul Davis, professional basketball player graduated from Rochester High School and earned honors in 2002. He played for and was drafted by the in 2006.
* , physicist and mathematician was born in Rochester, Michigan in 1849. Among many achievements, he was a professor at , president of the , and Dean of Carnegie Institute in Washington.
* , burlesque artist, model and actress.
* , catcher for the , was born in Rochester, Michigan on , . In 2005 he was named the captain of the Red Sox, the third player given the honor.
* , NASCAR Craftsman Truck Series driver, and his sons Brad and Brian.
* (born as Aileen Pittman), infamous American serial killer, born in Rochester, Michigan.