M-39 (Michigan highway)
This article is about the state highway in Michigan; for other uses, see M39 (disambiguation)

M-39 is a state highway in the US state of Michigan that runs from Lincoln Park to Southfield. The southern terminus of M-39 is at the corner of Southfield Road and Lafayette Boulevard in Lincoln Park, one block southeast of the junction of I-75 (Fisher Freeway) and two blocks northwest of M-85 (Fort Street). The northern terminus is at M-10 (Lodge Freeway) in Southfield.

M-39 begins at Lafayette Boulevard a block east of its junction with I-75 in Lincoln Park. From there the road is divided highway as it passes under I-75 and continues to the northwest. In Allen Park the road turns to the northeast and beyond the junction with I-94 turns into a limited-access freeway and winds its way through Dearborn. Near Greenfield Village the road curves to the northwest around the Ford Proving Grounds before turning to the north, a direction it will maintain until the end of its run. 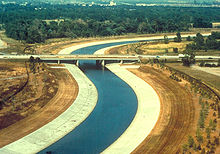 M-39 bridge over the River Rouge in Dearborn

In the 1960s, the length of Southfield Road from I-94 to Northwestern was rebuilt as the Southfield Freeway, with the service drive retaining the Southfield Road name. The southern portion of M-39 was improved as Southfield Highway. From 1966 to 1969, while I-75 (Chrysler and Fisher Freeways) was still being constructed through Detroit, M-39 also bore a "TO I-75" designation from its junction with I-75 in Lincoln Park to M-102/8 Mile Road.

In the 1990s, the M-39 designation was truncated slightly, as Lincoln Park officials sought to make modifications along Southfield Highway that were not up to MDOT's standards. As a result, M-39 no longer officially connects to M-85. Southfield Road continues southeasterly, ending at West Jefferson Avenue along the Detroit River.

Beyond M-39's northern terminus, just north of 9 Mile Road in Southfield, Southfield Road continues northward as a local road, intersecting with I-696 (at 11 Mile Road) and ending at Maple (15 Mile) Road in Birmingham.

The freeway portion is virtually always referred to by locals as the Southfield Freeway, or "the Southfield", rather than by route number. Since 2000, the freeway has undergone a complete overhaul, easing traffic congestion in the metropolitan area.[1]

In 2011, the stretch of M-39 between the Grand River Ave/5 Mile exit north to the interchange with M-10 was closed for resurfacing and bridge replacement. MDOT re-opened this stretch in October 2011.[2][3]