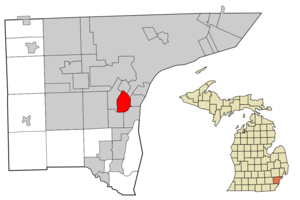 mapsize = 250x200px
map_caption = Location in Wayne County and the state of

Lincoln Park is a city in Wayne County in the of . The population was 40,008 at the 2000 census. The area was founded as a village in 1921 and reorganized as a city in 1925. The area was originally home to the Indians who ceded the land to a French settler, Pierre St. Cosme in 1776. The area developed as a providing homes to workers in the nearby steel mills and automobile plants of the area while having no industry within its bounds.

According to the , the city has a total area of 5.8 square miles (15.2 km²), all land. The north and south branches of the run through Lincoln Park and join just before leaving the city.

Long before Lincoln Park was incorporated as a city, an area adjacent to Ecorse River was the site of a pivotal meeting during . On , a council of several American Indian tribes from the Detroit region listened to a speech from the Ottawa leader Pontiac. Pontiac urged the listeners to join him in a surprise attack on , which they attempted on . Today, the area is known as Council Point Park, and a small engraved boulder marks the site of the historic meeting.

The auto magnate joined the Lincoln Park Police Department in his early years to gain access to the high performance cars the department used.

Lincoln Park gained brief notoriety in 1999 when the school board enacted a new intended to keep out gang symbology and colors. However, included among the prohibited paraphernalia were any items related to the "pagan" or "goth" lifestyle/fashion sense, including most notably, representations of the . The decision sparked animosity between the administration and the students and teachers, who generally saw it as an excessive measure given gang activity in the school had been largely eliminated in the late 1980s. This animosity culminated in legal action against the school initiated by the , on behalf of a student who self-identified as a practicing pagan. Under mounting pressure from the courts and media, the administration formally made an exception in the policy for practicing , though informally it dropped the matter. As of September 2006, the same school board has since again made another attempt, going so far as to ban clothing with any writing.

The School district is also known for failing to pass the in most categories.