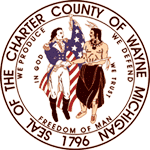 The eastern (and sometimes southern) boundary is a water boundary in the Detroit River and Lake St. Clair with Essex County, , . Automotive traffic crosses this boundary at the and the . Due to the change in direction of the river, this portion of Ontario actually lies south of Wayne County. Due to the direction ambiguity, the southern communities of the county are usually referred to as "".

is the largest island in Wayne County and is connected to the mainland by the .

*Grosse Pointe Shores (most, with the remainder in Macomb County; residents voted to incorporate as a city in 2008)