M-10, (also The Lodge, John C. Lodge Freeway, and Northwestern Highway) is a state trunkline route in the US state of Michigan. The southernmost portion follows Jefferson Avenue in downtown Detroit, and the southern terminus is at the intersection of Jefferson and Randolph Street leading to the entrance to the Detroit–Windsor Tunnel. The northern terminus is in West Bloomfield at the intersection with Orchard Lake Road. M-10 was built in segments throughout much of the 1950s and 1960s. It carried several different names before the entire route was finally officially named The John C. Lodge Freeway in 1987.[2] M-10 was named after John C. Lodge, an influential Detroiter and mayor of Detroit from 1927-1928. 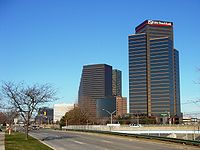 Southfield Town Center along the Lodge.

This freeway, almost always referred to as "the Lodge" rather than by route number or full name runs northwesterly from downtown Detroit to the Oakland County suburbs. The freeway portion of M-10 ends at "The Mixing Bowl", the local name for the sprawling interchange of I-696, US 24/Telegraph Road, the Lodge, Northwestern Highway, Lahser Road and Franklin Road in Southfield. Beyond this interchange, M-10 continues for several miles as a four to six-lane divided highway.

The portion of M-10 from "The Mixing Bowl" until its terminus with Orchard Lake Rd and Fourteen Mile Rd is known as Northwestern Highway. It was designed as a scenic divided four to six-lane sloping highway with a wide tree lined center median. Travelling Southbound down the hills gives a scenic view of distant downtown Detroit contrasted with the surrounding woodland area. Unfortunately, the build up of office and medical buildings on Northwestern has lessened the experience over the years.

Prior to its use as a designation for 'The Lodge Freeway' the M-10 designation was used twice before since Michigan first posted its highway designations in 1918. All incarnations of M-10 also had parts designated as US 10 at one time.

The first iteration of M-10 utilized the present-day segments of these following highways; US 24, M-13, US 23 and M-33 (former alignment of US 23). It also coincided with the Dixie Highway (east branch) and the Theodore Roosevelt International Highway for much of its length.

The second iteration of M-10 was, technically, the much-reduced remnant of the original, first iteration of the route in the Flint area, serving as a business connection for the city as the through route, US 10, bypassed it on the east. It was later re-designated as BUS US 10, then as BUS M-54 in the 1960s before being turned back to local control in the 1980s.

During the 1950s, this highway was proposed to be extended as far as the Fenton-Clio Expressway (US 23) at Fenton,[3] but was cancelled when I-75 was, instead, routed between Detroit and Flint via Pontiac.

The Lodge was originally made up of three legs with unique names: the 'John C. Lodge' ran from Jefferson Avenue in downtown Detroit to Wyoming Avenue; the 'James Couzens' ran from Wyoming to M-102/8 Mile Road; and the portion north of 8 Mile was named 'Northwestern Highway'. Since then the freeway itself has become known as 'The Lodge' along its complete length and only the service drives running alongside the freeway have retained their original names.[citation needed]

The intersection with the Edsel Ford Freeway, next to Wayne State University was built in 1953 and was the first full freeway-to-freeway interchange built in the United States.[4] Originally constructed and opened without any state trunkline route designation until it was assigned as a part of US 12 in the 1950s.

The section from the Edsel Ford Freeway (now I-94) into downtown Detroit was designated as US12. Then it was assigned as Business Spur I-696 in 1961 or 1962 immediately before the completion of the first phase of I-696 in 1964.[5] It was signed as a business spur of I-696 as a way to circumvent the elements it had that rendered it substandard to the Interstate Highway System. Soon after, though, the Lodge became part of US 10 when that route was removed from Woodward Avenue.

US 10 was truncated at Bay City in 1986, and the Lodge was redesignated as M-10. The non-freeway Northwestern Highway, until then designated M-4, was also renumbered as M-10 shortly after in 1987. The southernmost portion of the Lodge Freeway was also redesignated as a portion of BS I-375 on paper from I-75 south. When the US 10 shields were removed, they were universally replaced with M-10 shields instead of BS I-375 shields.[6]

With the Michigan Department of Transportation's deemphasization of proper names historically used by Metro Detroiters for the area's Interstates, the Lodge is now one of only three in the Detroit area universally referred to by name rather than route number — the others being the Davison Freeway (M-8) and the Southfield Freeway (M-39).[citation needed]

From 2006 to 2007, the Lodge underwent major reconstruction to ease traffic congestion in the metro area temporarily closing down much of the freeway.[7] The $133-million project (equivalent to $141 million today[8]) included concrete pavement reconstruction and rehabilitation, new barrier walls, repairs or replacements to 50 bridges, upgrades to 22 ramps, utility upgrades, and replacement of freeway signs between Lahser Road in Southfield and Jefferson Avenue in Detroit.[9]

The Lodge was signed as Business Spur I-696 in 1961 or 1962 immediately before the completion of the first phase of I-696 in 1964.[5] It was signed as a business spur of I-696 as a way to circumvent the elements it had that rendered it substandard to the Interstate Highway System.