The Detroit News is one of the two major newspapers in the U.S. city of Detroit, Michigan. The paper began in 1873, when it rented space in the rival Free Press's building. The News absorbed the Detroit Tribune on February 1, 1919, the Detroit Journal on July 21, 1922, and on November 7, 1960, it bought and closed the faltering Detroit Times. However, it retained the Times' building which it used as a printing plant until 1967 when a new facility opened in Sterling Heights and it was demolished.[2] The street in downtown Detroit where the Times building once stood is still called "Times Square." The Evening News Association, owner of The News, merged with Gannett in 1985.

The News claims to have been the first newspaper in the world to operate a radio station, station 8MK, which went on the air August 20, 1920. 8MK is now WWJ. In 1947, it established Michigan's first television station, WWJ-TV, now WDIV-TV.

In 1989, the paper entered into a 100-year joint operating agreement with the rival Free Press, combining business operations while keeping separate editorial staffs. The combined company is called the Detroit Newspaper Partnership. The Free Press moved into The News building in 1998 and until May 7, 2006, the two published a single joint weekend edition. Today The News, which has won three Pulitzer Prizes, is published Monday-Saturday, and has an editorial page in the Sunday Free Press.

The Detroit News was founded by James E. Scripps who, in turn, was the older half-brother and one-time partner of Edward W. Scripps. The paper's eventual success, however, is largely credited to Scripps' son-in-law, George Gough Booth, who came aboard at the request of his wife's father. Booth went on to construct Michigan's largest newspaper empire, founding the independent Booth Newspapers chain (now owned by S.I. Newhouse's Advance Publications) with his two brothers.

The Detroit News building was erected in 1917. It was designed by architect Albert Kahn, who included a faux-stone concrete building with large street level arches to admit light. The arches along the east and south side of the building were bricked-in for protection after the 12th Street Riot in 1967. The bricked-in arches on the east and south ends of the building were reopened during renovations required when the Free Press relocated its offices there 20 years later.

In 1931 The Detroit News made history when it bought a three place Pitcairn PCA-2 auto-gyro as a camera aircraft which could take off and land in restrict places and semi-hover for photos. It was the ancestor of today's well known news helicopter.[3] In 1935 a single Lockheed Model 9 Orion was purchased and modified by Lockheed as a news camera plane for the Detroit News. To work in that role, a pod was built into the frontal leading edge of right wing about 8 feet out from the fuselage. This pod had a glass dome on the front and mounted a camera. To aim the camera the pilot was provide with a primitive grid like gun sight on his windshield.[4]

On July 13, 1995, Newspaper Guild employees of the Detroit Free Press and The News along with pressmen, printers and Teamsters, working for the "Detroit Newspapers" distribution arm, went on strike. Approximately half of the staffers crossed the picket line before the unions ended their strike in February 1997. The strike was resolved in court three years later, with the journalists' union losing its unfair labor practices case on appeal. Still, the weakened unions remain active at the paper, representing a majority of the employees under their jurisdiction.

On August 3, 2005, Gannett announced that it was selling The News to MediaNews Group and purchasing the Free Press from the Knight Ridder company. With this move, Gannett became the managing partner in the papers' joint operating agreement. On May 7, 2006, the combined Sunday Detroit News and Free Press were replaced by a stand-alone Sunday Free Press. On December 16, 2008, Detroit Media Partnership announced a plan to limit weekday home delivery for both dailies to Thursday and Friday only. On other weekdays the paper sold at newsstands would be smaller, about 32 pages, and redesigned. This arrangement went into effect on March 30, 2009.[5] 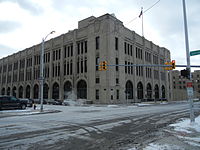 The News has significantly lower print circulation than the Free Press (over 100,000 fewer copies, according the Knight Ridder 2004 Annual Report) though The News website is the 10th most-read newspaper website in the United States.

Editorially, The News is considered to be somewhat more conservative than the Free Press. However, it considers itself to be libertarian. In an editorial statement printed in 1958, The News described itself as consistently conservative on economic issues and consistently liberal on civil liberties issues. It has never endorsed a Democrat for president, and has only failed to endorse a Republican presidential candidate three times—twice during the Franklin D. Roosevelt era and once again in 2004, when it refused to endorse George W. Bush for reelection.[6]