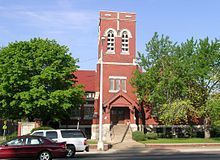 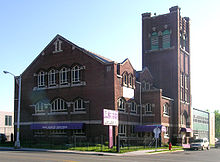 The area that was to become Highland Park began as a small farming community, on a large ridge located at what is now Woodward Avenue and Highland, 6 miles (10 km) north of Detroit. In 1818, prominent Detroit judge Augustus B. Woodward bought the ridge, and platted the village of Woodwardville in 1825. The development of the village failed. Another Detroit judge, Benjamin F. H. Witherell, son of Michigan Supreme Court justice James Witherell, attempted to found a village platted as Cassandra on this site in 1836, but this plan also failed.[4]

In 1907, Henry Ford purchased 160 acres just north of Manchester Street between Woodward Avenue and Oakland Street to building an automobile plant. Construction of the Highland Park Ford Plant was completed in 1909, and the area's population dramatically increased just a few years later in 1913, when Henry Ford opened the first assembly line at the plant. The village of Highland Park was incorporated as a city in 1918 [6] to protect its tax base, including its successful Ford plant, from Detroit's expanding boundaries.

In 1910 Highland Park, then a village, had 4,120 residents. Between 1910 and 1920 Highland Park's population grew to about 46,500, an increase of 1,081 percent. The growth of Highland Park and neighboring Hamtramck broke records for increases of population; both municipalities withstood annexation efforts from Detroit.[7] In 1925, Chrysler Corporation was founded in Highland Park. It purchased the Brush-Maxwell plant in the city, which would eventually grow to a size of 150 acres, and become the site of the company's headquarters for the next 70 years.[4]

In 1944, the Davison Freeway, one of the USA's first modern limited access urban expressways (freeway),[dubious – discuss] was opened, running through the center of the city. The freeway was completely reconstructed and widened to improve its safety in 1996 and 1997.[8]

Ford Motor Company wound down operations at its Highland Park plant in the late 1950s, and in the late decades of the 20th century the city experienced many of the same difficulties as Detroit - declines in population and tax base accompanied by an increase in street crime. White flight from the city accelerated after the 1967 Detroit 12th Street Riot. Ford's last operation at the factory, the production of tractors at its Model T plant, was discontinued in 1973, and a year later the entire property was sold to a private developer for general industrial usage.[4] The city became heavily black and impoverished by the 1980s. Chrysler, the last major private sector employer in the city, moved its corporate headquarters from Highland Park to Auburn Hills between 1991 and 1993, paying the city a total of $44 million in compensation.[4]. The move dislocated a total of 6,000 jobs over this period.[4]

Once known as "The City of Trees," the town was thickly forested until the 1970s, when Dutch elm disease caused many old trees to be cut down.

In August, 2011, over two-thirds of the streetlights in Highland Park were removed by the city, due to an inability to pay a $60,000 per month electric bill.[11] 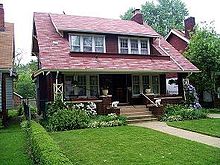 According to the United States Census Bureau, the city has a total area of 2.9 square miles (7.5 km2), all land.

There were 6,199 households out of which 27.6% had children under the age of 18 living with them, 17.0% were married couples living together, 33.4% had a female householder with no husband present, and 43.2% were non-families. 38.4% of all households were made up of individuals and 15.6% had someone living alone who was 65 years of age or older. The average household size was 2.56 and the average family size was 3.43.

Highland Park is governed under the council-mayor form of government wherein an elected mayor is the chief executive and administrative officer of the city, and the council its legislative body. The mayor appoints city officers such as the city clerk, attorney, treasurer, and finance director, though, the council has the power to refuse or accept the appointments. The city council consists of five members elected at large who serve terms of four years. The highest vote getter becomes council president for that term.[12]

The US Postal Service operates the Highland Park Post Office at 13215 Woodward Avenue.[16]

Chrysler was headquartered in Highland Park.[17] In 1992 the company announced that it was going to move its headquarters to its technology center in Auburn Hills, located approximately 25 miles (40 km) north of the original headquarters site.[18] The company planned to accomplish the move by 1995. In 1992 Chrysler had 25% of Highland Park's tax base and contributed 50% of the city's budget.[19]

The gear-reduction starter Chrysler used from the early 1960s through the late 1980s garnered the nickname "Highland Park Hummingbird" after Chrysler's hometown and the starter's distinctive cranking sound.

Despite Chrysler's departure, the city remains associated with Chrysler in the minds of auto enthusiasts.[citation needed]

McGregor Library in Highland Park was once the city's public library.

In 1918 Katherine and Tracy McGregor, wealthy individuals, deeded the property of a facility for "homeless, crippled, and backward children."[24] The McGregor Public Library opened on that site in 1924.[25] The library closed in 2002. Around 2007 the city began efforts to re-open the library.[26]

The Ernest T. Ford Recreation Center serves as a recreation center for the community. The center has a basketball court, exercise equipment, pool tables, table games, and televisions. After a renovation, it re-opened in February 2008.[27] In 1993 Highland Park Community College won the MCCAA Division 1 Men's Basketball Championship against Macomb Community College.