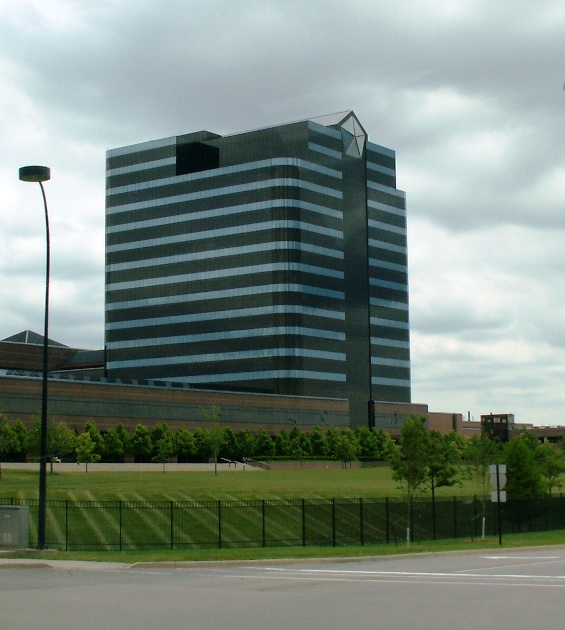 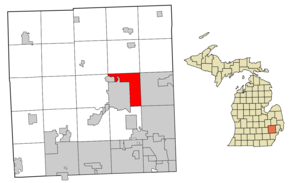 Auburn Hills is a city in Oakland County in the of . The population was 19,837 at the 2000 census. The city was formed in 1983 from the now defunct Pontiac Township.

Auburn Hills is home to the world headquarters of , the , , , shopping center, as well as , home of both the 's and the 's .

Auburn Hills is bordered to the east by the city of Rochester Hills.

There were 8,064 households out of which 26.7% had children under the age of 18 living with them, 43.0% were married couples living together, 10.5% had a female householder with no husband present, and 42.9% were non-families. 33.1% of all households were made up of individuals and 6.0% had someone living alone who was 65 years of age or older. The average household size was 2.25 and the average family size was 2.92.

Auburn Hills began as the town of Auburn in 1821 at what is today the corner of Auburn and Squirrel Roads. Situated on the , it was named by Aaron Webster, the first settler, for Auburn, . His sawmill and grist mill attracted settlers to Auburn. After the streets were laid out in 1826, Auburn rivaled nearby Pontiac until the 1860s, when it lost its prosperity. The town was renamed Amy in 1880, and it officially became Auburn Heights in 1919. The area to the north was Pontiac Township, which bordered the city of Pontiac on two sides.

In 1908, automobile pioneer bought a farmhouse 3 miles northeast of Auburn Heights to use as his country retreat. His oldest child, Winifred Dodge, married real estate baron , who built his own country retreat 2.5 miles north of Auburn Heights. The estate included hunting land, dog kennels, a swimming pool, horse stables, and a 5,000 square foot house. Pontiac Township purchased the estate in 1976, and adapted the buildings for government use. Today, it is known as the Auburn Hills Civic Center.

Pontiac Township and Auburn Heights together became the City of Auburn Hills in 1983. The first use of the name "Auburn Hills," in 1964, was by . They named their campus (a former Nike missile base) at Featherstone and Squirrel roads for the town and the hilly terrain in the area. Besides , two other colleges, , and , have campuses partially within the city limits.

Auburn Hills roughly follows the course of and is home to a prosperous business community. In the early 1980s, Oakland University partnered with developers to create a technology and research park on unused land it owned. The Oakland Technology Park was approved by the city in 1985, with , EDS, and Chrysler to build campuses there. Today, the city's many tech and office buildings cause its population to swell to 80,000 during the workday.

Many areas of the city still have a rural atmosphere, but land is being developed fast. , a shopping mall, opened in 1998. In 2002, the small downtown area at Auburn and Squirrel was revitalized as the "Village Center" with streetscape improvements. Pedestrian-friendly development is encouraged in this district.