Glover was born in San Francisco, California, the son of Carrie (née Hunley) and James Glover. His parents, postal workers, were active in the National Association for the Advancement of Colored People (NAACP), working to advance equal rights.[2] Glover's mother, daughter of a midwife, was born in Louisville, Georgia and graduated from Paine College in Augusta, Georgia.[3] Glover grew up with a love for sports, like his father. Glover suffered from epilepsy in his second decade and as a young adult. According to his own account, he "developed a way of concentrating so that seizures wouldn't happen." Using this technique, which he describes as "a type of self-hypnosis", Glover says he has not suffered a seizure since age 34.[4]

Glover graduated from George Washington High School in San Francisco before attending City College of San Francisco for a year; he then matriculated to the American University, where he graduated with a B.A. in economics in 1968. While in college, he met his future wife Asake Bomani, whom he married in 1975, and later divorced. He had one daughter with Asake, her name was Mandisa, and she was born on January 5, 1976. 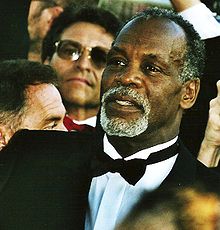 Glover originally worked in city administration[citation needed]. Conservatory Theater, a regional training program in San Francisco[citation needed]. Glover also trained with Jean Shelton at the Shelton Actors Lab in San Francisco. In an interview on Inside the Actor's Studio, Glover credited Jean Shelton for much of his development as an actor. Deciding that he wanted to be an actor, Glover resigned from his city administration job and soon began his career as a stage actor. Glover then moved to Los Angeles for more opportunities in acting, where he would later go on to co-found the Robey Theatre Company with actor Ben Guillory in honor of the actor, radical activist, and concert singer Paul Robeson in Los Angeles in 1994[citation needed].

Glover has had a variety of film, stage, and television roles, and is best known for playing Los Angeles police Sergeant Roger Murtaugh in the Lethal Weapon series of action films. During his career, he has made many cameo appearances. For example, he appeared in the Michael Jackson video Liberian Girl of 1987. He has also appeared as the husband to Whoopi Goldberg's character Celie in The Color Purple, and as Lieutenant James McFee in the film Witness. In 1994 he made his directorial debut with the Showtime channel short film Override. Also in 1994, Glover and actor Ben Guillory formed the Robey Theatre Company in Los Angeles, focusing on theatre by and about Black people.

Glover earned top billing for the first time in Predator 2, the sequel to the sci-fi action film Predator. That same year he starred in Charles Burnett's To Sleep with Anger, for which he won the Independent Spirit Award for Best Male Lead.

In addition, Glover has been a voice actor in many children's movies. Glover was featured in the popular 2001 film Royal Tenenbaums, also starring Gwyneth Paltrow, Anjelica Huston, Ben Stiller and Owen Wilson.

In 2004, he appeared in the low-budget horror film Saw as Detective David Tapp. In 2005, Glover and Joslyn Barnes announced plans to make No FEAR, a movie about Dr. Marsha Coleman-Adebayo's experience. Coleman-Adebayo won a 2000 jury trial against the US Environmental Protection Agency (EPA). The jury found the EPA guilty of violating the civil rights of Coleman-Adebayo on the basis of race, sex, color and a hostile work environment, under the Civil Rights Act of 1964. Coleman-Adebayo was terminated shortly after she revealed the environmental and human disaster taking place in the Brits, South Africa, vanadium mines. Her experience inspired passage of the Notification and Federal Employee Anti-discrimination and Retaliation Act of 2002 (No FEAR Act).

In 2009, Glover performed in The People Speak a documentary feature film that uses dramatic and musical performances of the letters, diaries, and speeches of everyday Americans, based on historian Howard Zinn's "A People's History of the United States”.[5]

Glover played President Wilson, the President of the United States in 2012, a disaster film directed by Roland Emmerich and released in theaters November 13, 2009.

Glover sought to make a film biography of Toussaint Louverture for his directorial debut. In May 2006, the film had included cast members Wesley Snipes, Angela Bassett, Don Cheadle, Jonathan Rhys Meyers, Chiwetel Ejiofor, Roger Guenveur Smith, Mos Def, Isaach De Bankolé, and Richard Bohringer. Production, estimated to cost $30 million, was planned to begin in South Africa, filming from late 2006 into early 2007.[8] In May 2007, President of Venezuela Hugo Chávez contributed $18 million to fund the production of Toussaint for Glover, who is a prominent U.S. supporter of Chávez. The contribution annoyed some Venezuelan filmmakers, who said the money could have funded other homegrown films and that Glover's film was not even about Venezuela.[9][10] The following June, some Venezuelan filmmakers petitioned for Glover to reconsider using the funds provided by their president while the actor was scouting locations outside the Venezuelan capital Caracas.[11] The petition resulted in the local film guilds Anac and Caveprol being outlawed by Venezuela; the country's state-backed film institute Cnac was also instructed to sever ties with the guild.[12] In April 2008, the Venezuelan National Assembly authorized an additional $9,840,505 for Glover's film, which is still in planning.[13]

On September 2, 2009, Glover signed an open letter of objection to the inclusion of a series of films intended to showcase Tel Aviv at the Toronto International Film Festival.[14] Glover enjoys spending his summers at his lake house in Miami, Florida. His hobbies include skiing, horseback riding, and playing baseball.

On April 16, 2010, Glover was arrested in Maryland during a protest by SEIU workers for Sodexo's unfair and illegal treatment of workers.[15] He was given a citation and later released. The Associated Press reports "Glover and others stepped past yellow police tape and were asked to step back three times at Sodexo headquarters. When they refused, Starks says officers arrested them."[16] 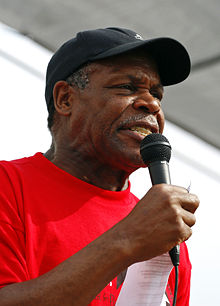 Glover speaks at a March for Immigrants Rights in Madison, Wisconsin, in 2007.

While attending San Francisco State University, Glover was a member of the Black Students Union which,[17] along with the Third World Liberation Front and the American Federation of Teachers, collaborated in a five-month student-led strike to establish a Department of Black Studies. The strike was the longest student walkout in U.S. history.[18] It helped create not only the first Department of Black Studies but also the first School of Ethnic Studies in the U.S.

Hari Dillon, current president of the Vanguard Public Foundation, was a fellow striker at SFSU. Glover now sits on Vanguard's advisory board. Glover is also a board member of The Algebra Project, The Black AIDS Institute, Walden House, and Cheryl Byron's Something Positive Dance Group. He was charged with disorderly conduct and unlawful assembly after being arrested outside the Sudanese Embassy in Washington during a protest over Sudan's humanitarian crisis in Darfur.[19]

Glover's long history of union activism includes support for the United Farm Workers, UNITE HERE, and numerous service unions.[20] In March 2010, Danny Glover supported 375 Union workers in Ohio by calling upon all actors at the 2010 Academy Awards to boycott Hugo Boss suits due to Hugo Boss announcement to close a manufacturing plant in Ohio after a proposed pay decrease from $13 to $8.30 an hour was rejected by the Workers United Union.[21]

In January 2006, Harry Belafonte led a delegation of activists, including Glover and activist/professor Cornel West, in a meeting with President of Venezuela Hugo Chávez.

Glover was an early supporter of former North Carolina Senator John Edwards in the 2008 Democratic presidential primaries until Edwards' withdrawal,[22] although some news reports indicated that he had endorsed Ohio Congressman Dennis Kucinich,[23] who he had endorsed in 2004.[24] After Edwards dropped out, Glover then endorsed Barack Obama.[25]

Glover was an outspoken critic of George W. Bush, calling him a known racist. "Yes, he's racist. We all knew that. As Texas's governor, Bush led a penitentiary system that executed more people than all the other U.S. states together. And most of the people who died were Afro-Americans or Hispanics."[26]

Glover's support of California Proposition 7 (2008) led him to use his voice in an automated phone call to generate support for the measure before the election.[27]

On April 6, 2009, Glover was given a chieftancy title in Imo State, Nigeria.[28] Glover was given the title Enyioma of Nkwerre, which means A Good Friend in the language of the Igbo people of Eastern Nigeria.

Glover has become an active member of Board of Directors of The Jazz Foundation of America.[29] Danny became involved with The Jazz Foundation in 2005, and has been a featured host for their annual benefit A Great Night in Harlem[30] for several years, as well appearing as a celebrity MC at other events for the foundation. In 2006, Britain’s leading African theatre company Tiata Fahodzi appointed Danny Glover as one of its three Patrons, joining Chiwetel Ejiofor and Jocelyn Jee Esien opening the organization’s tenth anniversary celebrations (Sunday 2 February 2008) at Theatre Royal Stratford East, London.

Glover is also an active board member of the TransAfrica Forum.[31]

On January 13, 2010, Glover compared the scale and devastation of the 2010 Haiti earthquake to the predicament other island nations may face as a result of the failed Copenhagen summit the previous year. Glover said "...the threat of what happens to Haiti is a threat that can happen anywhere in the Caribbean to these island nations... they're all in peril because of global warming... because of climate change... when we did what we did at the climate summit in Copenhagen, this is the response, this is what happens..."[32] In the same statement, he called for a new form of international partnership with Haiti and other Caribbean nations and praised Venezuela, Brazil, and Cuba, for already accepting this partnership.

On November 1, 2011 Glover spoke to the crowd at Occupy Oakland on the day before the Oakland General Strike where thousands of protestors shut down the Port of Oakland.[33]

Activism against Iraq war and invasion

Danny Glover has been an outspoken critic of the Iraq war before the war began in March 2003. In February 2003, he was one of the featured speakers at Justin Herman Plaza in San Francisco where other notable speakers included names such as author Alice Walker, singer Joan Baez, United Farm Workers co-founder Dolores Huerta and Rep. Barbara Lee, D-Oakland. Glover was a signatory to the April 2003 anti-war letter "To the Conscience of the World" that criticized the unilateral American invasion of Iraq that led to "massive loss of civilian" and "devastation of one of the cultural patrimonies of humanity".[34] During an anti-war demonstration in Downtown Oakland in March 2003, Danny Glover praised the community leaders for their anti-war efforts saying that "They're on the front lines because they are trying to make a better America... The world has come together and said 'no' to this war – and we must stand with them."

On the foreign policy of Obama administration, Glover said, "I think the Obama administration has followed the same playbook, to a large extent, almost verbatim, as the Bush administration. I don’t see anything different... On the domestic side, look here: What’s so clear is that this country from the outset is projecting the interests of wealth and property. Look at the bailout of Wall Street. Why not the bailout of Main Street? He may be just a different face, and that face may happen to be black, and if it were Hillary Clinton, it would happen to be a woman... But what choices do they have within the structure?".[35]

In 2010, Glover delivered the Commencement Address and was awarded an honorary Doctor of Humane Letters degree from Utah State University.[36] He was also the recipient of a tribute paid by the Deauville American Film Festival in France on september 7th, 2011.

Credits in film, television and theatre