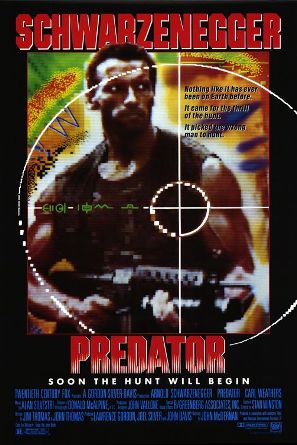 "Predator" is a 1987 science fiction, action and directed by , starring , , , and . The story follows a US Army Special Forces Unit on a mission to rescue hostages from a terrorist group in . Unknowingly, the group is hunted by an form. Reaction to the film was generally favorable, and the film grossed US$60 million in the United States. The film has generated a , "" (1990) and two crossover films with the Alien franchise: "Alien vs. Predator" (2004) and "" (2007).

The "Predator" film uses the story of the being the hunted from ""-inspired stories. The Predator is an alien with advanced technology and a penchant for hunting difficult game. With capability, multi- vision enhancement (although the film only shows him seeing the ), and a light-bending armor suit with equally advanced weaponry, the Predator is able to travel anywhere, hunt anything, and usually succeed.

"Predator" is the first of the film series, as the creature descends on Earth interested in hunting exotic game - in this case humans. Information released after the film reveals the Predator scans the Earth's broadcast frequencies and chooses as a location. A unit is also en route to the same location, and during their operations stumble upon the Predator. The military unit possesses significant firepower, which attracts the creature's attention. During the film's final conflict, only one American is left and a cat-and-mouse game begins with each adversary hunting the other.

Opening with a mysterious spacecraft entering Earth's atmosphere, the film begins on the coast of , where an Army Special Forces group, led by Major Alan "Dutch" Schaefer (), is ordered to rescue a presidential cabinet minister kidnapped by guerrilla forces in Val Verde. Dutch's old Army buddy and now agent, Major George Dillon (), joins the team and they travel by helicopter to their destination within the jungle.

Once inserted, the team find the remains of a downed helicopter and later the bodies of several skinned men. They are identified to be a Green Beret unit, whose presence in the country mystifies Dutch. They soon make their way to a heavily defended rebel encampment and take out its inhabitants in short order, save for a girl named Anna (), whom they take prisoner. Dutch is enraged to discover the rescue mission had been a set up to get his group to destroy the camp, after the previous team - the dead men they found earlier - disappeared in a failed rescue of two CIA agents belonging to Dillon. Dutch extracts this information from him, who confesses that he was using him all along.

As the soldiers make their way to the extraction point, they are observed from afar by an unknown creature, who uses infrared imaging to spy. Once members of the team are killed mysteriously, they become aware that something in the jungle is stalking them, whose presence is confirmed by eerie sightings of a cloaked figure. Anna delivers insight into the creature, who has apparently become a local legend for hunting humans as trophies. Despite attempts to track down the creature, the team is slowly killed off one by one, until only Dutch and Anna remain. Realizing the creature only kills those possessing weapons, a wounded Dutch sends Anna unarmed to the extraction point. Dutch narrowly escapes the creature—revealed to be a masked, humanoid-reptilian being—by unintentionally covering himself in mud, which hides his body's heat signature, rendering him invisible to the creature's thermal vision.

Dutch confronts the creature one last time, using the mud as camouflage and a number of improvised weapons and traps to kill it. The creature arrives as planned, but despite having its cloaking ability disabled in an attack, it manages to capture Dutch. Then, in a display of chivalry, the creature challenges Dutch to a final duel in hand-to-hand combat, unveiling its face and discarding his electronic weaponry before brutally beating him. Once cornered, Dutch drops the from one of his traps, which falls and crushes the creature, mortally wounding it. As Dutch approaches the creature and asks it what it is, the creature mimics his question and then activates a time bomb on his wrist device. Dutch runs for cover as the creature self-destructs, and a massive explosion ignites the jungle. Anna and the rescue helicopter finally arrive to pick up a disheveled but victorious Dutch. Flying back to safety, he stares out at the jungle in mournful silence.

For a few months, following the release of "", a joke was making rounds in Hollywood. Since had run out of earthly opponents, he would have to fight an alien if a fifth installment of his boxing series were to be made. Screenwriters Jim and John Thomas took the joke seriously and wrote a screenplay based on the joke. The Thomas script for "Predator" was originally titled "Hunter".

According to the documentaries included on the release of the special edition, the original monster suit was vastly different from the final product, designed by the late . In defense of Jean-Claude Van Damme's alleged claims of the suit being "too clumsy and too hot", the original monster was a disproportionate, overweight creature with a duck-like head. It was nowhere near as agile as the creature portrayed by Kevin Peter Hall. After Van Damme was removed from the film and subsequent financial troubles with the studio nearly causing the project to shut down, McTiernan consulted Stan Winston. While on a plane ride to Fox studios along side Aliens director James Cameron, Winston sketched monster ideas, Cameron suggested he'd always wanted to see a creature with 'Mandibles' which became part of the Predator's iconic look.

To play the elite band of mercenaries, both Silver and Gordon, with co-producer John Davis, put out a casting net for other larger-than-life men of action. Carl Weathers, who had been memorable as boxer in the "Rocky" films was their first choice to play Dillon, while professional wrestler and former was hired for his formidable physique as Blain. Native Americans and , and African-American , who co-starred alongside Schwarzenegger in "Commando", provided the ethnic balance. As a favor to the writer of Joel Silver's blockbuster "", the studio hired screenplay writer not only to play a supporting role in the film, but also to keep an eye on McTiernan due to the director's inexperience.

was originally cast as the Predator creature, the idea being that the physical action star would use his martial arts skills to make the Predator an agile, -esque hunter. When compared to Schwarzenegger, Weathers, and Ventura, actors known for their bodybuilding regimens, it became apparent a more physically-imposing man was needed to make the creature appear threatening. Additionally, it was reported that Van Damme constantly complained about the monster suit being too hot, causing him to pass out. He also had allegedly voiced his reservations on numerous occasions that he would not appear on camera without the suit in the film. Jesse Ventura's autobiographical book also alleges Van Damme intentionally injured a stunt man.

Commitments by Schwarzenegger delayed the start of filming by several months. The delay gave Silver enough time to secure a minor rewrite from screenwriter . eventually began in the jungles of , near , during the second week of April 1986. But the film overall was filmed in , . Much of the material dealing with the unit's deployment in the jungle was completed in a few short weeks and both Silver and Gordon were pleased by the dailies provided by McTiernan. On Friday, April 25, production halted so that Schwarzenegger could fly to in a chartered by Silver in order to get to his wedding on time. He was married on April 26, 1986, to , and honeymooned for two weeks in , while the second unit completed additional lensing. The production resumed filming on May 12.

Both director McTiernan and Schwarzenegger lost 25 pounds during the film. Schwarzenegger's weight loss was a professional choice. McTiernan lost the weight because he avoided the food in due to health concerns. In an interview, Carl Weathers said the actors would secretly wake up as early as 3:00 a.m. to work out before the day's shooting. Weathers also stated that he would act as if his physique was naturally given to him, and would work out only after the other actors were nowhere to be seen. It was reported that actor Sonny Landham was so unstable on the set that a bodyguard was hired; not to protect Landham, but to protect the other cast members from Landham. [ [http://www.imdb.com/name/nm0484739/bio Sonny Landham - Biography ] ]

According to Schwarzenegger, filming was physically demanding as he had to swim in very cold water and spent three weeks covered in mud for the climactic battle with the alien.

R/Greenberg Associates created the film's optical effects, including the alien's ability to become , its point-of-view, its glowing blood, and the electrical spark effects.

The soundtrack was composed by , who was coming off the huge success of "" in 1985. "Predator" was his first major action movie and the score is full of his now familiar genre characteristics: heavy horn blasts, staccato string rhythms, and undulating timpani rolls that highlight the action and suspense. 's song "" is featured in the helicopter en route to the jungle. Mac also recites a few lines from the song as he's chasing the Predator after it escapes from their booby trap.

Released on June 12, 1987, "Predator" was #1 at the box office in its opening weekend. Its opening weekend gross of $12 million was second to "" in 1987. [cite web|url=http://www.boxofficemojo.com/yearly/chart/?view2=releasedate&view=opening&yr=1987&p=.htm|title=1987 DOMESTIC GROSSES|publisher=|accessdate=2008-01-30] Critical reaction to the film was generally favorable, with reviewers crediting McTiernan for its breathtaking pace and nonstop action and Schwarzenegger for delivering a fine performance.Fact|date=April 2008 However, not everyone was able to follow the concept behind the movie. , while giving it a positive review, still complained in his column for the "cite web">url=http://rogerebert.suntimes.com/apps/pbcs.dll/article?AID=/19870612/REVIEWS/706120303/1023|title=Predator|date=1987-06-12|author=Roger Ebert|Ebert, Roger|accessdate=2008-01-30|publisher=] Dean Lamanna wrote in that "the militarized monster movie tires under its own derivative weight." [cite journal|last=Lamanna|first=Dean|title=‘Predator’: Scoring the hunt|publisher=|issue=18/1|year=1987|pages=36] The film grossed nearly $60 million in the U.S. and $100 million at the worldwide box office. [cite web|url=http://www.boxofficemojo.com/movies/?id=predator.htm|title=Predator (1987)|publisher=|accessdate=2008-01-30]