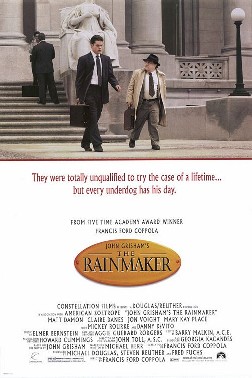 Rudy Baylor (Matt Damon) is a graduate from the Memphis State UniversityLaw School. Unlike most of his fellow graduates, he has no high-paying job lined up and is forced to apply for part-time positions.

Desperate for a job, he reluctantly is introduced to J. Lyman "Bruiser" Stone (), a ruthless but successful ambulance-chasing lawyer, who makes him an associate. To earn his fee, Rudy is required to hunt for potential clients at a local hospital. He is introduced to Deck Shifflet (), a less-than-ethical former insurance assessor, now a paralegal who has failed the bar exam six times. However, Deck is resourceful in gathering information and practically an expert on insurance lawsuits.

Rudy has one case, one of insurance bad faith. It could be worth several million dollars in damages, but his personal life is falling to pieces and he is about to declare himself . When his employer is raided by the police and the , he and Deck set up a practice themselves and file suit on behalf of a middle-aged couple, the Blacks ( and ), whose 22-year-old son Donny Ray is dying of , but could have been saved with a bone marrow transplant, denied by their insurance carrier Great Benefit.

Rudy has only just passed the Bar examination and has never argued a case before a and — but he now finds himself up against a group of experienced and devious lawyers from a large firm, headed by Leo F. Drummond (), a showman attorney who uses unscrupulous tactics to win his cases.

The original judge assigned the case is set to dismiss it because he sees it as one of many so-called "lottery" cases that slow down the judicial process. But a far more sympathetic judge () takes over when the first judge suffers a fatal heart attack in his swimming pool. The new judge, a former civil rights attorney, denies the insurance company's petition for dismissal.

While preparing his case, Rudy seeks new clients at the hospital and meets pretty Kelly Riker (), a battered wife whose husband's savage beatings have put her in hospital. He persuades Kelly to file for divorce, but this leads to a confrontation with Rudy that results in the abusive husband's death. To keep Rudy from being prosecuted, Kelly tells the police she was alone and killed her husband in self-defense. The district attorney declines to prosecute her.

Donny Ray dies, but not before giving a video deposition given in the front yard of his home. The case goes to trial, where Drummond preys on Rudy's inexperience and gets the testimony of a key witness () stricken from the record. Nevertheless, thanks to Rudy's single-minded determination and skillful cross-examination of Great Benefit's president (), the jury finds for the plaintiff. It is a great triumph for Rudy and Deck, but the insurance company quickly declares itself bankrupt, thus allowing it to avoid paying fifty million dollars in punitive damages. There is no payout for the grieving parents and no fee for Rudy.

Totally disillusioned with the law process and how it can be manipulated, Rudy decides to abandon his new practice after only one case.

The film follows the book in most details, but does leave out an important piece of information from the book that was a central point of Rudy's case: the fact that the leukemia victim had an identical twin, which would have made a transplant virtually certain to work as it would have been a perfect genetic match.