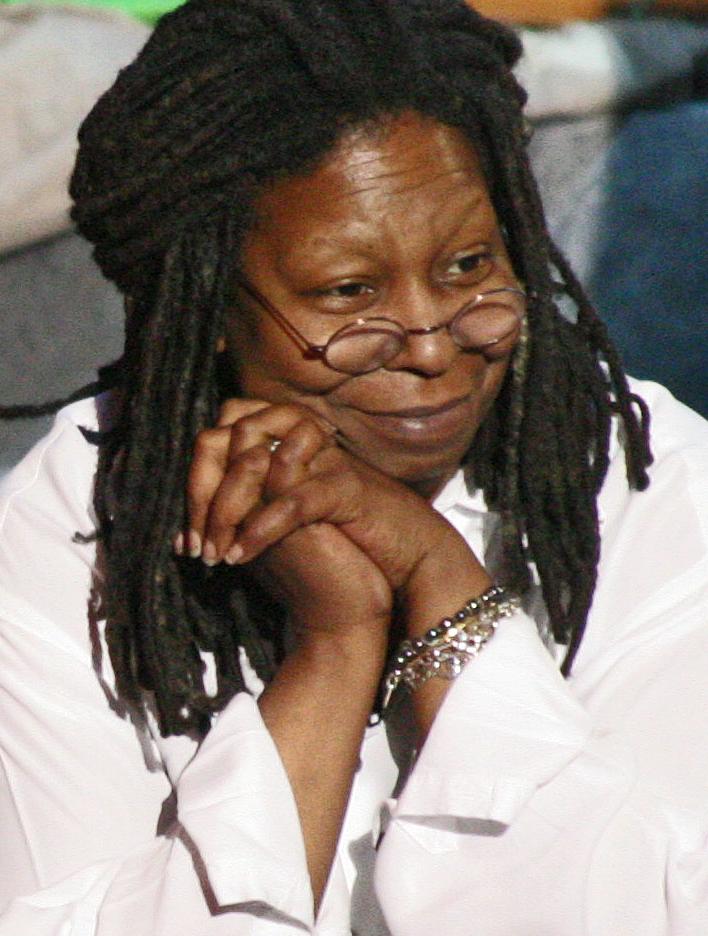 She is one of only thirteen people who have won an Emmy, a Grammy, an Oscar, and a Tony Award, including s. In 1990, she became the second female performer after to win an Academy Award for acting. She has won two s and two s for her performances in "" and "Ghost".

Goldberg was born Caryn Elaine Johnson in and raised in Manhattan's Chelsea neighborhood, the daughter of Emma (née Harris), a and teacher, and Robert James Johnson, a .

In an anecdote told by in the documentary film "Trekkies", a young Goldberg was watching "Star Trek", and upon seeing Nichols' character , exclaimed, "Momma! There's a black lady on TV and she ain't no maid!" [cite video | people=Nichelle Nichols | title=Trekkies | medium=DVD | publisher=Neo Motion Pictures | date=1997] This spawned life-long fandom of "Star Trek" for Goldberg, who would eventually achieve a recurring guest-starring role in 1987's "".

Goldberg's on-screen talent first emerged in 1981-82 in "", an avant-garde ensemble feature by San Francisco filmmaker William Farley. Goldberg created "The Spook Show", a one-woman show devised of different character monologues, in 1983. Director was instantly impressed and offered to bring the show to Broadway. The self-titled show ran from , to , for a total of 156 sold-out performances. While on Broadway, Goldberg's performance caught the eye of director . He was about to direct the -winning novel, "", written by . Having read the novel, she was ecstatic at being offered a lead role in her first motion picture. Goldberg received compliments on her acting from Spielberg, Walker, and music consultant . "The Color Purple" was released in the late autumn of 1985, and was a critical and commercial success. It was later nominated for 11 s including a nomination for Goldberg as Best Actress. The movie did not win any of its Academy Award nominations, but Goldberg won the .

A comedic and dramatic balance

Goldberg starred in 's directorial debut, 1986 "Jumpin' Jack Flash", and began a relationship with David Claessen, a director of photography on the set, and the couple married later that year. The movie was a success, and during the next two years, three additional motion pictures featured Goldberg, "Burglar", "", and "The Telephone". Though not as successful as her prior motion pictures, Goldberg still garnered awards from the N.A.A.C.P. Image Awards. Claessen and Goldberg divorced after the box office failure of "The Telephone", which Goldberg was under contract to star in. She tried to sue the producers, but with no luck. The 1988 movie, "", was critically acclaimed, and featured a young . As the 1980s concluded, she participated in the numerous HBO specials of "Comic Relief" with fellow comedians and .

In January 1990, Goldberg starred with in the TV situation comedy "". The show ran for two seasons on . Simultaneously, Goldberg starred in "", portraying a woman in the . She played a psychic in the 1990 film "Ghost", and became the first African-American female to win the in nearly 50 years. "" named her character, Oda Mae Brown, the 95th best movie character of all time. [cite news | author=Kelly Borgeson, "et al"| title=The 100 Greatest Movie Characters of All Time | url=http://www.premiere.com/features/1539/the-100-greatest-movie-characters-of-all-time-page12.html | work=Premiere | date= | accessdate=2008-05-17]

Goldberg wrote "Book" in October 1997, a collection featuring insights and opinions. In November and December 2005, Goldberg revived her one-woman show on Broadway at the in honor of its 20th anniversary.

From 1998 to 2001, Goldberg took supporting roles in the vehicle "" and "Kingdom Come". She starred in the successful ABC-TV versions of "", "", and the TNT Original Movie, "". In 1998, she gained a new audience when she became the "Center Square" on "", hosted by . She also served as Executive Producer, for which she was nominated for 4 s. She left the show in 2002, and the "Center Square" was filled in with celebrities for the last two on-air seasons without Goldberg. In 2003, Goldberg returned to television, starring in the NBC comedy, "", which was cancelled after one season. On her 48th birthday, Goldberg was honored with a star on the . During the next two years, she became a spokeswoman for and produced two television sitcoms: Lifetime's original drama "" that ran for six seasons and "Whoopi's Littleburg", a Nickelodeon show for younger children. Goldberg made guest appearances on the Hit comedy, "", as an elderly character named Louise Clarkson. She produced the Noggin sitcom "", in early 2006. She was a guest at 's 60th birthday bash and concert at on , .

Goldberg has recently announced her retirement from acting. She said in interviews that she wants to focus on "" and her broadcasting career.

On , Goldberg became the new moderator and co-host of "", replacing . O'Donnell stated on her official blog that she wanted Goldberg to be moderator. Goldberg's debut as moderator on "The View" drew 3.4 million viewers, 1 million fewer than O'Donnell's debut ratings. After two weeks, "The View", under Goldberg, was averaging 3.5 million total viewers, a 7% increase from 3.3 million under O'Donnell the previous season. [cite news | author=Michael Learmonth| title=Whoopi-led View on topshow tops Rosie's ratings | url=http://www.variety.com/article/VR1117972516.html?categoryid=1275&cs=1 | work=Variety | date=23 September 2007 | accessdate=2008-05-17]

Goldberg's first appearance on the show was controversial when she made statements about 's dogfighting as being "part of his cultural upbringing" and "not all that unusual" in parts of the South.

Some defended Goldberg, including her co-host , saying that her comments were taken out of context by the press, because she repeated several times that she did not condone what Vick did. [cite news | author=Lisa de Moraes| title=Whoopi on 'The View,' Day Two: She Doesn't Condone Michael Vick's Dogfighting | url=http://www.washingtonpost.com/wp-dyn/content/article/2007/09/05/AR2007090502493.html | work=The Washington Post | date=6 September 2007| accessdate=2008-05-17]

On more than one occasion, Goldberg has expressed strong disagreement and irritation with different remarks made by Elisabeth Hasselbeck. On , Hasselbeck and "The View" co-host Whoopi Goldberg were involved in a discussion about Hillary Clinton's new US$5,000 baby entitlement. The discussion became a little heated due to Hasselbeck's commenting on how it would lead to fewer abortions because of women wanting to keep the money. Goldberg told Hasselbeck to "back off a little bit" and asked her if she "had ever been in that position to make that decision." Goldberg added, "Most people do not want to have abortions. Most women do not have them with some sort of party going on. It is the hardest decision that a woman ever- wait- ever has to make. So, when you talk about it, a little bit of reverence to the women out there who have had to make this horrible decision. And one of the reasons that we have had to make this decision is because so many women were found bleeding, dead, with hangers in their bodies because they were doing it themselves. The idea of this was to make it safe and clean. That was the reason the law came into effect. That was why it was done." [cite news | author= | title= Access Hollywood | url=http://www.accesshollywood.com/news/ah6972.shtml | work=Access Hollywood | date= | accessdate=2008-05-17] [cite web | author=Chris Jancelewicz| title=Whoopi, Elisabeth Butt Heads Over Abortion | url=http://channels.netscape.ca/home/article.adp?id=20071004094909990016 | publisher= | date= | accessdate=2008-05-17]

Goldberg performed the role of , the radiant Queen of California, for a theater presentation called "" at , the second gate at the , in 2000. The show, which explains the of the (), opened on , , with the rest of the park.

Goldberg hosted the 2001 documentary short, "The Making Of ". In July 2006, Goldberg became the main host of the Backlot Tour, in which she appears multiple times in video clips shown to the guests on monitors placed on the .

Goldberg made a guest appearance on the hit TV show, "", in which she played herself. She is shown as endorsing her own workout video. From August 2006 to March 2008, Goldberg hosted "", a nationally syndicated morning radio program.

On the broadcast of "", announced Goldberg would be joining the show as moderator, the position previously held by and . [cite news | author=The Associated Press | title=Whoopi Goldberg joins 'The View' | url=http://www.cnn.com/2007/SHOWBIZ/TV/08/01/view.whoopi/index.html?eref=rss_mostpopular | work=CNN | date=2007 | accessdate=2008-05-17]

In October 2007 announced on air that she would be retiring from acting because she is no longer sent scripts, saying, "You know, there's no room for the very talented Whoopi. There's no room right now in the marketplace of cinema. Being a Black intellectual with a Jewish surname finally caught up to me." [cite news | author=World Entertainment News | title=Goldberg Retires From Acting | url=http://imdb.com/news/wenn/2007-10-04 | work=The Internet Movie Database News | date=4 October 2007 | accessdate=2008-05-17]

On , Goldberg announced on "The View" that from July 29th- September 7th, she will perform in the Broadway musical Xanadu.

At age 18, during her marriage to 26-year-old Alvin Martin, Goldberg gave birth to their first and only child Alexandrea c.1973. After Goldberg's divorce from Martin, she moved to California and helped found the San Diego Repertory Company, where she used the stage name "Whoopi Cushion". Before succeeding as an actress, she worked as a , a , and a . Goldberg later went on to marry David Claessen, but they divorced after two years, in 1988. Whoopi later married Lyle Trachtenberg, but their marriage lasted only one year. In 2000, Whoopi broke up with her boyfriend of five years, .

In 1993, Goldberg was briefly involved with , her co-star in "Made in America". Danson was married at the time and caring for his wife, who had survived a while giving birth in 1979. There was controversy following a comedy routine at a roast in which Danson performed in . Goldberg wrote the script.

Goldberg was involved in controversy in the summer of 2004 when, at a fundraiser for at in New York, Goldberg made a sexual joke about President , by waving a bottle of wine, pointing toward her crotch and saying: "We should keep Bush where he belongs, and not in the White House." , the biggest company in US health shake market, took exception to these comments made by Goldberg and dropped her from their current ad campaign. [url=http://www.guardian.co.uk/world/2004/jul/16/uselections2004.film]

Goldberg is one of few to win an Oscar, a Grammy, a Tony, and an Emmy. She has starred in over 150 films, and during a period in the 1990s, Whoopi was the highest-paid actress of all time. Her humanitarian efforts include working for "Comic Relief", recently reuniting with and for the 20th Anniversary of "Comic Relief".

In February 2002, Goldberg sent her Oscar statuette from "Ghost" to the to be cleaned and replated. During this time, the statuette was taken from its shipping container, and later retrieved by the shipping company, UPS.