Dearborn is a city in the U.S. state of Michigan. It is located in the Detroit metropolitan area and Wayne County, and is the eighth largest city in the U.S. state of Michigan. As of the 2010 census, it had a population of 98,153.[3] The city was the home of Henry Ford and is the world headquarters of the Ford Motor Company. It has a campus of the University of Michigan as well as Henry Ford Community College. Dearborn contains The Henry Ford, America's largest indoor-outdoor museum complex and Metro Detroit's leading tourist attraction.[4][5]

The area had been inhabited for thousands of years by varying indigenous peoples. Historical tribes belonged mostly to the Algonquian-language family, although the Huron were Iroquoian speaking.

The Dearborn area was settled by Europeans in 1786, after the American Revolutionary War.[6] The village of Dearbornville was established in 1836, named after patriot Henry Dearborn, a General in the American Revolution and Secretary of War under President Thomas Jefferson. Its origins as a city trace back to a January 1929 consolidation vote that established its present-day borders by merging Dearborn and neighboring Fordson (previously known as Springwells), which feared being absorbed into Detroit. The area between the two towns was, and still remains in part, undeveloped.

Once farm land, this was bought by Henry Ford for his estate, Fair Lane, and the Ford Motor Company World Headquarters. Later developments in this corridor were the Ford airport (later converted to the Dearborn Proving Grounds), other Ford administrative and development facilities, The Henry Ford (the region's leading tourist attraction containing a reconstructed historic village and museum), the Henry Ford Centennial Library, the super-regional shopping mall Fairlane Town Center, and the Dearborn Civic Center. It is planted with sunflowers and often with Henry Ford's favorite soybeans. The crops are never harvested.

In 2005, the Arab American National Museum (AANM) opened in Dearborn, the first museum in the world devoted to Arab-American history and culture. Most of the Arab-Americans in Dearborn and the Detroit area are ethnic Lebanese Christians, who immigrated in the early twentieth century to work in the auto industry, like many immigrants to the area. They have been joined by more recent Arab immigrants from other nations, some of whom are Muslim.

According to the United States Census Bureau, the city has a total area of 24.5 square miles (63 km2), of which, 24.4 square miles (63 km2) of it is land and 0.1 square miles (0.26 km2) of it (0.37%) is water. The Rouge River runs through the city with an artificial waterfall/low head dam on the Henry Ford estate to power his powerhouse. The Upper, Middle, and Lower Branches of the river come together in Dearborn. The river is widened and channeled near the Rouge Plant to allow lake freighter access.

Dearborn is among a small number of municipalities that owns property in other cities (the 626-acre (2.53 km2) Camp Dearborn in Milford, Michigan, 35 miles (56 km) from Dearborn[9]) and is possibly unique in holding property in another state (the Dearborn Towers apartment complex in Clearwater, Florida). These holdings are considered part of the city of Dearborn, and revenues generated by camp admissions and rent collected are used to bolster the city's budget. 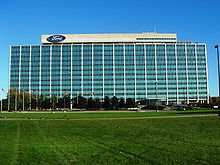 Ford Motor Company has its world headquarters in Dearborn.[10] In addition its Dearborn campus contains many research, testing, finance and some production facilities. Ford Land controls the numerous properties owned by Ford including sales and leasing to unrelated businesses such as the Fairlane Town Center shopping mall. DFCU Financial, the largest credit union in Michigan, was created for Ford and related companies' employees. One of the largest employers in Dearborn is Oakwood Healthcare System. Other major employers include auto suppliers like Visteon, education facilities like Henry Ford Community College and museums like The Henry Ford. Other businesses which are headquartered in Dearborn include Carhartt (clothing), Eppinger (fishing lures), United Airlines Detroit Reservation Center, AAA Michigan (insurance), and the Society of Manufacturing Engineers.[citation needed]

According to the City's 2010 Comprehensive Annual Financial Report,[11] the largest employers in the city are:

There were 36,770 households out of which 31.3% had children under the age of 18 living with them, 51.0% were married couples living together, 9.4% had a female householder with no husband present, and 35.1% were non-families. 30.9% of all households were made up of individuals and 14.7% had someone living alone who was 65 years of age or older. The average household size was 2.65 and the average family size was 3.42.

Dearborn has a large community of descendants of ethnic European immigrants from the 19th and 20th centuries, whose ancestors generally first settled in Detroit: Irish, German, and Polish. The city has had a small African American population, many of whose ancestors came to the area in the Great Migration of the early twentieth century.[12]

The city's population includes 30,000 Arab Americans. Ethnic Arabs own many shops and businesses, offering services in both English and Arabic.[13] Lebanese are included among the population.[14] In the 2000 census, Arab Americans comprised 30% of Dearborn's population; many have been in the city for several generations. The city has the largest proportion of Arab Americans for a municipality of its size (about 100,000).[15]

The first Arab immigrants came in the early-to-mid-20th century to work in the automotive industry and were chiefly Lebanese Christians (Syriac-Maronites). Other immigrants from the Mideast in the early twentieth century included a large Armenian-American community, who are Christian. Assyrians/Chaldeans/Syriacs have also immigrated to the area.

Since then, Arab immigrants from Yemen, Iraq, and the Palestinian territories, most of whom are Muslim, have joined them. Lebanese Americans are still the most numerous group.[16] The Arab Muslim community has built the Islamic Center of America, the largest mosque in North America,[17] and the Dearborn Mosque. More Iraqi refugees have come, fleeing the continued war in their country since 2003.

Amtrak, the national passenger rail system, provides service to Dearborn, operating its Wolverine three times daily in each direction between Chicago, Illinois and Pontiac, Michigan via Detroit. Baggage cannot be checked at this location; however, up to two suitcases in addition to any "personal items" such as briefcases, purses, laptop bags, and infant equipment are allowed on board as carry-ons. Currently there are two rail stops in Dearborn: the ordinary Amtrak station and a rarely-used station at Greenfield Village. Amtrak operates on Norfolk southern's (NS) "Michigan line". This track runs from Dearborn to Kalamazoo, Michigan. Most of the freight traffic on these rails is related to the automotive industry. Norfolk Southern's Dearborn Division offices are also located in Dearborn.

University of Michigan–Dearborn & Henry Ford Community College are located in Dearborn on Evergreen Road and are adjacent to each other.

Dearborn residents, along with a small portion of Dearborn Heights residents attend Dearborn Public Schools, which operates 34 schools including 3 major high schools. Divine Child High School and Elementary School are in Dearborn as well; the high-school is the largest private coed high school in the area. Dearborn Schools operated the Clara B. Ford High School inside Vista Maria, a non-profit residential treatment agency for girls in Dearborn Heights. Clara B. Ford High School became a charter school in the 2007–08 school year.[citation needed]

The Roman Catholic Archdiocese of Detroit previously operated the St. Alphonsus Elementary School in Dearborn. In 2005 the archdiocese announced that the school would close.[19]

The Arab-American community in Dearborn sponsors an annual Arab-American Festival, which attracts hundreds of thousands of attendees from the region. In recent years Christian evangelists have tried to hand out religious literature at the festival; others have protested, sometimes with signs or spoken insults about Arabs, Muslims, Catholics and other groups. The city has struggled to deal with reducing confrontations while supporting a major public event and has entered into controversial areas related to free speech.

In 2010 four members of the Christian group, Acts 17 Apologetics, were arrested and prosecuted for "breach of the peace" because they were preaching to a crowd at the annual Arab-American Festival.[20] All the charges, except one of failure to obey a police order, were thrown out by a jury.[21]

At a Tea Party campaign rally in Nevada following the incident, Sharron Angle, a Republican candidate for Congress in the state, responded to a question, saying, "We're talking about a militant terrorist situation, which I believe isn't a widespread thing, but it is enough that we need to address, and we have been addressing it."[20][22] She suggested (incorrectly) that the Dearborn city government and one in Frankford, Texas enforced sharia (Islamic) law rather than the US Constitution.[20] As noted in the "Demographics" section, most of the Arab-American residents in Dearborn are descendants of Lebanese Christians and are not Muslim. "Mayor Jack O'Reilly [of Dearborn] called Angle's comments "shameful." He said they were based on distorted Tea Party accounts of the arrest of members of an anti-Islam group at an Arab festival." He said Angle had "maligned" the city.[20] She was defeated in the election.

During the festival, four other people from Apologetics were blocked from handing out Arabic-English copies of the Gospel of John on a public street. Police ordered them to stop filming the incident, to provide identification, and to move at least five blocks from the border of the fair.[23][24] The group had also appeared at the 2009 Arab-American festival and were removed by security guards that year.[25] [26]

On April 22, 2011, the preacher Terry Jones planned a protest outside the Islamic Center of America during the Arab-American Festival. Local authorities required him either to post a "peace bond" or to go to trial. The jury voted to require the posting of a $1 "peace bond", but Jones and his co-pastor Wayne Sapp refused to pay. They were held briefly in jail, while alleging that the bond requirement violated their First Amendment rights. Later that night, Jones paid the bail and was released by the court.[27] The ACLU criticized the city for violations of Jones' right of free speech, and filed an amicus brief supporting his protest plans. It does not support his ideas.[28] Jones tried to speak at the annual Festival on June 18, 2011, but he was turned away by protesters. Christian missionaries accompanied Jones with their own signs of protest; they yelled insults at Arabs, Muslims, Islam, and Catholics.[29]