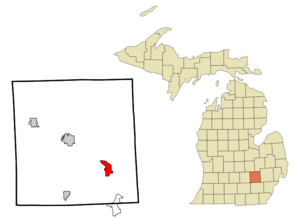 Brighton is a city in Livingston County, the fastest growing county in the of . As of the 2000 census, the city population was 6,701, while the 2006 estimate places the population at 7,263. The city is part of the South Lyon-Howell-Brighton Urban Area. Brighton is one of two incorporated cities in Livingston County, and incorporates land that once part of Brighton Township, Green Oak Township, and Genoa Township.

According to the , the city has a total area of 3.7 s (9.7 ), of which, 3.6 square miles (9.3 km²) of it is land and 0.1 square miles (0.3 km²) of it (3.22%) is water. Having and intersect in Brighton allows its residents the ability to travel over Southeast with ease. Brighton is central to a many larger areas which is a great advantage to its residents.

There were 3,103 households out of which 25.7% had children under the age of 18 living with them, 44.3% were married couples living together, 9.1% had a female householder with no husband present, and 43.7% were non-families. 37.8% of all households were made up of individuals and 15.5% had someone living alone who was 65 years of age or older. The average household size was 2.15 and the average family size was 2.87.

A majority of Livingston County and the areas neighboring it in Ingham County and Shiawasse County tend to be conservative voters. There is a saying among local republican politics which states, "If I cannot get elected in here, then I will quit politics all together."--Joe Hune

The Brighton Area Schools System is a collection of nationally and state-recognized institutions of excellence. They are annually ranked as some of the best places in the State of Michigan and Brighton High School is a repeating contender for a spot on the list of the 1000 best high schools in the country by for their environment and quality of education. The schools comprising the Brighton Area School District and the locations they serve are as follows:

Fire service for the city is provided through a separate governmental entity called the Brighton Area Fire Authority, which also services the Townships of Brighton and Genoa.

Library services for the city is provided through a separate governmental entity called the Brighton District Library, which also services the townships of Brighton, Genoa and Green Oak.

Recreation services for the city is provided through a separate governmental entity called the Southeastern Livingston County Recreation Authority, which also services the townships of Brighton, Genoa and Green Oak, as well as the Brighton Area Schools.

Brighton is the commercial hub for its surrounding townships in Livingston County. Most of the jobs in the actual downtown are commercial services, however, when you get to the city borders there is some industry. With the addition of new restaurants and bars and a revamping of a major upscale jeweler, Downtown Brighton is establishing itself as the new destination place for southeast Livingston County.Fact|date=July 2008

Downtown is considered to be located at the intersection of Main Street and Grand River Avenue. The setting there is in line with Brighton's core values as a family-oriented place and its love for parks. The heart of downtown contains the Millpond and The Imagination Station. The Millpond regularly holds concerts in the summer that are frequently huge successes.Fact|date=July 2008 Across the Millpond is the Imagination Station which is a giant wooden playstructure complex for children of all ages. Right next to these two is an array of restaurants and other eateries. These include Ciao Amicis (Italian), Stillwater (Classic American Grill) and The Yum Yum Tree (ice cream and Sweets).

In the fifth episode of "" (105), the character (played by actress ) says that she is from Brighton, Michigan.

In "" the movie begins in Brighton, Michigan with the two main characters being maintenance staff at the local ski hill, Mt. Brighton.

The 1987 Horror film, The Gate, starring a young , had its world premier at the Brighton Cinemas in Brighton, the producers decided to have the official premier in a town called Hell, , but Brighton was the nearest town with a Theater large enough to hold the event. Dorff and the other stars of the movie attended the premier.

* - Buried at Brighton's Fairview Cemetery. Republican. Board chairman and president, American Motors,; delegate to Michigan state constitutional convention from 12th Senatorial District,; Governor of Michigan,; resigned 1969; delegate to Republican National Convention from Michigan, 1964; candidate for Republican nomination for President, 1968; U.S. Secretary of Housing and Urban Development,; member of Wayne State University board of governors,.
* - Bingham was elected as the first Republican Governor of Michigan in 1854 and was re-elected in 1856; he was the first Republican to be elected Governor of any state. He was known as the farmer-governor of Michigan and was instrumental in establishing the Agricultural College of the State of Michigan (today, ). Actively campaigned for in the 1860 election. Bingham was elected as a Republican to the United States Senate in 1858 and served in the 36th and 37th Congresses from March 4, 1859, until his death on October 5, 1861, he is interred in Old Village Cemetery in Brighton.
* - starred as a high school football, basketball and baseball player at Brighton High School, setting a national record for home runs hit, went on to play quarterback for the Michigan Wolverines, and briefly played for the New York Yankees and Dallas Cowboys, he is currently on the Minnesota Vikings as a 3rd string quarterback
* - Star pitcher for the 1968 World Series Champion Detroit Tigers, and 1968 Cy Young award winner resides in the Brighton area (Pinckney).
* - Very popular outfielder for the Detroit Tigers, and famous for switching to Shortstop in the 1968 World Series has lived in the Brighton area since 1978.
* - Had hit album "passion in the dark" in 1983, and a hit single off the album called "Hot Cherie" . He also played drums for Redbone, a band most famous for its hit single "come and get your love" in the 1970s, at the time going under his given name "George Spannos".
* - Lived in Brighton for a brief time from 4th grade until Junior year of high school whereafter he moved to California to begin his film acting career.
* Barry Blazs is one of the top selling Christian Musicians of all time with his band "Code of Ethics" with singles reaching number one on the Christian Charts numerous times.