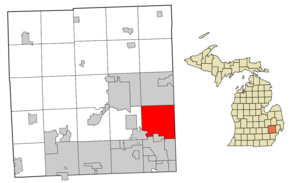 Troy is a city in Oakland County in the of . It is a of Detroit. As of the 2000 census, the city had a total population of 80,959, making it the 12th-largest city in Michigan by population, and the second-largest city in Oakland County after Farmington Hills; in 2005, the estimated that Troy had become the most populous city in the county. Troy has become a business and shopping destination in the area, with numerous office centers and the upscale mall.

In 2008, Troy was ranked 22nd on a list of "Best Places to Live" in the United States [http://money.cnn.com/magazines/moneymag/bplive/2008/snapshots/PL2680700.html] by CNN Money, using criteria including housing, quality of education, economic strength, and recreational opportunities.In 2008, Troy ranked as the fourth most affordable U.S. city with a median household income of 78,800.

The first land purchases in what became Troy Township were recorded in 1819 in section 19. The first settlement, known as Troy Corners, originated two years later when Johnson Niles purchased convert|160|acre|ha|0 in what is now the north-central portion of the city. Four years later, Ira Smith built the first house at Big Beaver Corners, and the first public school opened at Troy Corners. Troy Township was organized on . The City of Troy was incorporated in 1955, mainly as a way to prevent neighboring cities (Clawson, Royal Oak, and Birmingham) from incorporating any more of its land into their cities.

In 1966, I-75 was completed in Troy, which increased access to and from the city. This gave a major boost to Troy's , leading to the development of its civic center, school district, and recreation systemFact|date=April 2007.

The Troy Historical Museum is a free-to-the-public, town-square-like museum chronicaling the different stages of Troy's progression from first inhabitation to the city it has become today. Located at the corners of and , the museum is located behind the old city hall building. Open year round, the museum has ten original, complete structures which patrons may enter and observe how they functioned in the past and how they were decorated, as all buildings are full of artifacts from that period. Each structure is original and was painstakingly moved from its original location to the museum intact. Starting with a log and mud structure used by the first settlers, there is also an 18th century schoolhouse and estate, a , a blacksmith's shop, a church along with the pastor's home, and the old city hall, which acts as a general museum. There is a gazebo in the center of the square which will host parties and period bands during annual festivities. Many schools from around the area plan field trips to the museum, and the church is also available for weddings. [http://www.ci.troy.mi.us/Museum/]

Troy, a thriving center of business, particularly in the automotive and financial sectors, and is home to a number of major companies. Based on property value, Troy is the second largest city in Michigan, second only to Detroit. The is the city's tallest building (now renamed the National City Center). Troy is home to the upscale mall, featuring a skywalk and over 180 stores, and the .

In 2003, Troy was named Michigan's Sportstown by "" magazine for having the top community sports programs in the state.

In the summer of 2005, to commemorate the city's 50th anniversary, ceramic statues, each standing four feet (1.2 m) high, were displayed at various locations in the city. The beaver is the symbol of Troy, and the city's main commercial thoroughfare (Big Beaver Road) is named for it.

Troy is also home to the Troy Sports Center, which is the official training facility of the of the . The facility is also used for indoor soccer and hockey leagues, and is home to the city's high school hockey teams.

^ was headquartered in Troy until it was acquired by in 1998 for an estimated $1.48 billion, in the process making CVS the nation's largest chain-drug retailer.

^^ was an arts and crafts chain spanning 14 states that was headquartered in Troy, even after being acquired by in 1983. The company filed for bankruptcy in 2004, and became defunct soon after.

^^^ was headquartered in Troy until it acquired Sears in 2005, establishing itself in the former Sears headquarters in Hoffman Estates, . Its massive headquarters still remains, though it is scheduled for demolition and the creation of a landscaped square with boulevards lined with upscale shops, restaurants, offices, a theater, and condominiums. [ [http://www.detnews.com/apps/pbcs.dll/article?AID=/20070501/METRO/705010382 A town square for Troy? ] ] .

Troy uses the form of government, and thus is governed by a consisting of a and six council members. The city council appoints a , who manages the day-to-day operations of the city.

The City of Troy and City of Clawson on its southern border compose Michigan's 41st District for State Representative. The district has been represented in the State House by since 2007, and in the state Senate by , also since 2007. On the national level, Troy is part of the 9th district, represented by since 1993.

The city has historically been right-leaning and tends to elect Republican candidates to public office. However, the city has had indications of a small Democratic trend, most notably including the election of Tim Burns to the Oakland County Board of Commissioners; Burns' district covers most of Troy, including the most populous areas, as well as Clawson.

On June 2nd, 2008 Democratic presidential nominee, , made a televised campaign visit and speech at Troy High School. This was Obama's first visit to Oakland County during his presidential run. [http://www.troycolts.org/photo_gallery/Obama%20visit/index.html]

There were 30,018 households out of which 36.9% had children under the age of 18 living with them, 64.5% were married couples living together, 6.0% had a female householder with no husband present, and 27.1% were non-families. 22.8% of all households were made up of individuals and 7.8% had someone living alone who was 65 years of age or older. The average household size was 2.69 and the average family size was 3.23.

Troy is home to , , a business oriented school, as well as branches for the , , , and . also has its Management Education Center located off of I-75 near the intersection of Crooks Rd. and Square Lake Rd. (19 Mile).

Troy is well known for its exemplary schools both in Michigan as well as around the nation. The Troy School District has six national blue ribbon and 13 State Exemplary Schools. The schools have a 99% graduation rate, with 95% of those students going on to higher education and 2% going on to military service. [ [http://www.troy.k12.mi.us/about/index.htm About Troy Schools ] ] Both Troy High School and Athens High School were named to the list of The 1000 Most Outstanding High Schools in the United States by magazine.

The Troy School District also sends 25 students per year to the , currently ranked 7th in the Newsweek rankings of the best public high schools in the United States. Troy is also planning to host the International Academy's eastern campus in the old Baker Middle School beginning with the 2008-2009 school year.

The public schools comprising the Troy School District are as follows:

The Oakland-Troy Airport is considered the County's 'executive' . Business travelers and tourists using private, corporate and charter aircraft benefit from the airport's convenient proximity to business, recreation and entertainment facilities. [ [http://www.oakgov.com/aviation/ota/ Oakland/Troy Airport ] ] It is located between Maple Road and 14 Mile Road.

Charter passenger, air freight, as well as aircraft maintenance and fuel, are available on the field.

Troy was also home to the , (IATA: 3BB), which was located at the corners of Big Beaver Road and John R Road. It opened in 1946 and closed in 1995 due to declining use and pressure to sell the land for commercial development. [ [http://www.airfields-freeman.com/MI/Airfields_MI_Detroit_NW.html#bigbeaver Abandoned & Little-Known Airfields: Michigan, Northwest Detroit area ] ] 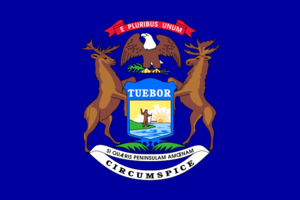