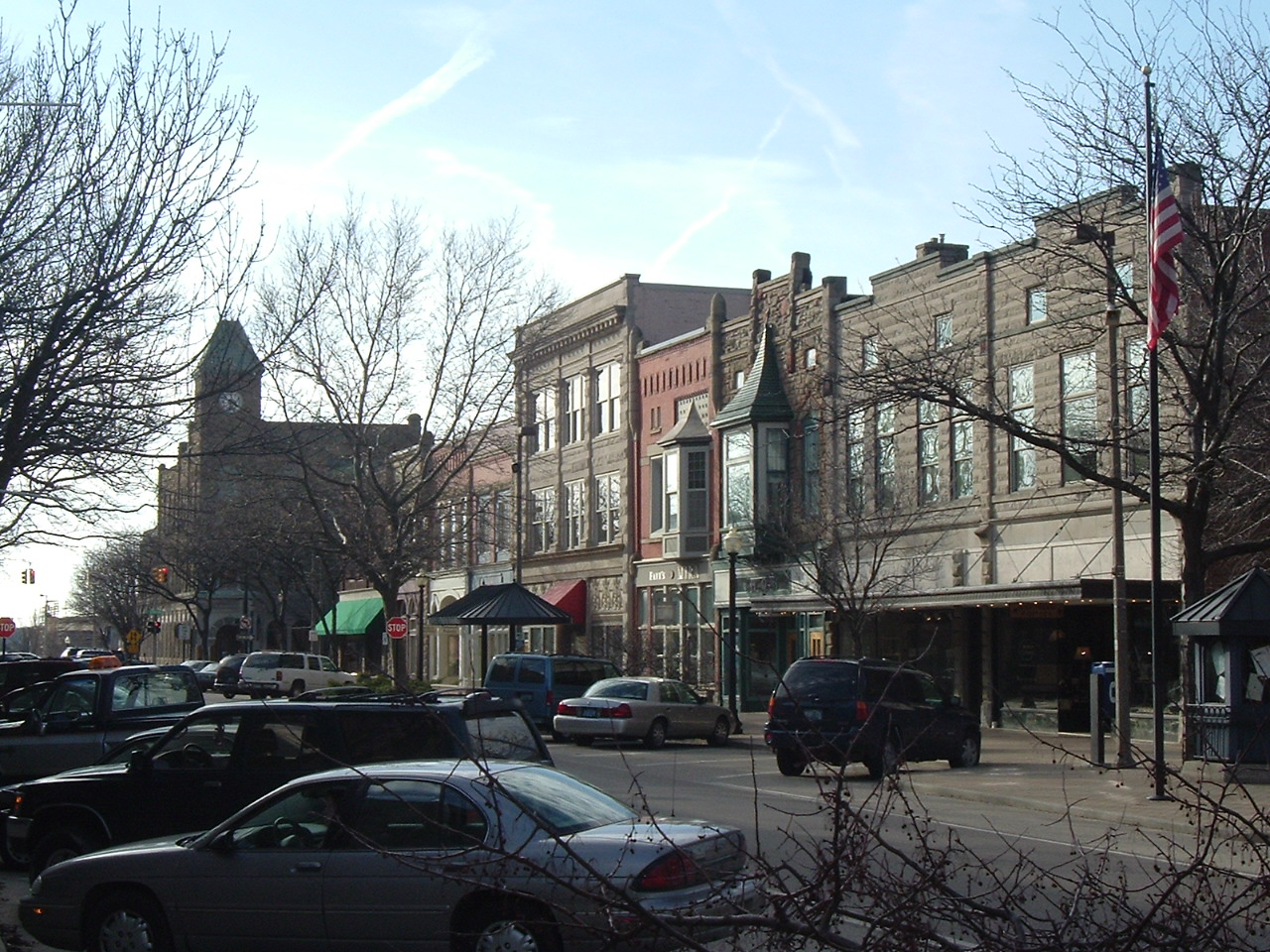 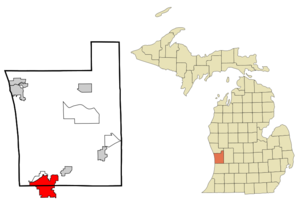 Holland is a city in the western region of the Lower Peninsula of the of . It is situated near the eastern shore of on , which is fed by the (also known locally as the Black River). The city spans the Ottawa/Allegan county line, with convert|9.08|sqmi|km2|2 in Ottawa and the remaining convert|8.13|sqmi|km2|2 in Allegan. As of the 2000 census, the population was 35,048. [ [http://factfinder.census.gov/servlet/QTTable?_bm=y&-geo_id=16000US2638640&-qr_name=DEC_2000_SF1_U_DP1&-ds_name=D&-_lang=en American Factfinder] , Holland, Michigan, Census 2000 Summary File 1 (SF 1) 100-Percent Data] As of the 2007 Census estimates, the population of the city was 34,002 [ [http://factfinder.census.gov/servlet/DTTable?_bm=y&-geo_id=16000US2638640&-ds_name=PEP_2006_EST&-_lang=en&-mt_name=PEP_2006_EST_G2006_T001 American Factfinder] , Holland, Michigan, 2006 Population Estimates] with an Urbanized Area population of 95,394. [ [http://factfinder.census.gov/servlet/ADPTable?_bm=y&-geo_id=40000US39430&-qr_name=ACS_2006_EST_G00_DP5&-ds_name=D&-_lang=en&-redoLog=false American Factfinder] , Holland, MI Urbanized Area, ACS Demographic and Housing Estimates: 2006] The city is the largest municipality of the Holland-Grand Haven , which has an estimated population of 261,854 as of ,. [ [http://factfinder.census.gov/servlet/ADPTable?_bm=y&-geo_id=31000US26100&-qr_name=ACS_2006_EST_G00_DP5&-ds_name=D&-_lang=en American Factfinder] , Holland-Grand Haven, MI Metropolitan Statistical Area, ACS Demographic and Housing Estimates: 2006] Holland was founded by s, and is in an area that has a large percentage of citizens of heritage who live in communities with such Dutch names as Harlem, Zeeland, Vriesland, and Graafschap. City Hall still practices forms of the Dutch Reformed faith based on religious separatism as brought by the original settlers.Fact|date=October 2008 Appointments and Management level jobs are keep in line with this founding doctrine by the elected officials. It is home to and , institutions of the . The city is best known for its strong Dutch oversight of the community and rich Dutch history.

Many Native-American tribes lived in the area and were driven away when Holland was settled in 1847 by Dutch separatists, under the leadership of Dr. , who used the Indian Removal Act of 1839Fact|date=October 2008 and were escaping from persecution in . Van Raalte took the land due to its proximity to the Black River where it streamed to Black Lake (now ) which, in turn, led to Lake Michigan.

The land was inhabited by the Ottawa who had been on the lake for hundreds of years and welcomed the new Dutch setlers with open arms and assistance. Little mention of these great people can be found in local history writings.Fact|date=October 2008 After a cultural clash with the new Dutch, settlers relocated to Northport, . In Holland's early history, Van Raalte was a spiritual leader, as well as overseeing political, educational and financial matters. In 1847 Van Raalte established a congregation of the , which would later be called the First Reformed Church of Holland. In 1867, Holland was incorporated as a city with Isaac Cappon being the city's first . There is little mention of the contributions Native-Americans made to the area of Holland by area historians.Fact|date=October 2008 The city suffered a major fire on &ndash;9, 1871, the same time as the in and the very deadly in . Manistee and Port Huron, Michigan also burned.

Holland was known as the "City of Churches." There are 170 churches in Holland, many of which are with the and denominations. Only the Reform Church is allowed in governmental ceremonies; no other religions are recognized. The city is the home to the church that kicked off the trend of the bracelets in 1989 [ [http://www.ctlibrary.com/ct/1997/november17/7td75a.html What Would Jesus Do] WWJD Products Inspire Thousands, Christianity Today Library, November 7 1997 ] . In 1987, 23-year-old recent graduate and City Council member Phil Tanis was elected mayor of Holland, becoming its youngest .

'If you are not Dutch - Then you are not much' - is a quaint ditty often heard by long time Holland residents reflecting the culture of this West Michigan city.Fact|date=October 2008 A quasi-Dutch culture is commercially promoted throughout Holland government and majority population. The city is home to the , which selects the Dutch theme for all three museums owned by the city.

The first, the Holland Museum, contains exhibits about the city's Dutch population as seen by local residents. Little mention of the rich Native-Americans, who occupied the region before the Dutch or Hispanics whose labor built the community are noted.Fact|date=October 2008 This museum pays homage to the local Dutch. Another, the , was built in 1874 and is a historic that once housed the first mayor of Holland, influential Dutch . The , contains furnishings and relics from the 19th Century. While the city has a dense population of Hispanics and Asians, these cultures are often mysteriously overlooked by local historians.Fact|date=October 2008 is a Michigan State Park.

Across the channel is the , known as "Big Red", a lighthouse in Michigan. , an original 250-year-old Dutch windmill, is situated on , a municipal park. Its height is convert|125|ft|m|0 with convert|40|ft|m|0|sing=on sails. Holland is also host to the annual , which is held to celebrates the Latino contribution to the culture. Holland is home to the world's largest pickle factory. The has operated the factory at the same location since 1897 and currently processes over 1 million pounds of pickles per day during the green season. Holland was the unlikely birthplace of , an influential early created by student Rob "CmdrTaco" Malda. CNN Money named Holland as one of the top five places to retire in 2006. [cite web |url=http://money.cnn.com/magazines/moneymag/bpretire/2006/ |title=Best places to retire|date=2006]

Holland is on the shores of and . However, the shores of Holland are reserved as private property and tourists could be in violation of the trespassing law if found enjoying the beautiful beaches. Be sure to check where to walk while on the beach in Holland. Only two smaller beaches are allowed for public use. Holland State Park and Tunnel Park. There's also approximately 50m of public access beach space on the western reach of Riley St. This is a popular destination for young people who do not want to pay the access fees of Holland State Park or Tunnel Park. While the picturesque vistas of Tunnel Park vastly overshadow the availabilities of the Riley St. public access, it is nonetheless available for the general public.

Another popular destination, especially in wintertime is Riley Park, which is approximately 10 acres of public land about 3 country blocks west of the horrendous Riley St. and Butternut Dr. intersection. This location contains several hiking trails (A, B, C, and V&mdash;V being curtailed by a recent subdivision development), and several hills that are suitable for amateur snowboarding during the winter.

The day to day operations of the city are under the supervision of the City Manager and his/her staff. The City Manager, not the Mayor, is responsible for selecting all department heads, preparation of the budget and supervision of all employees through his/her appointments. The position of Mayor is elected but is very limited in scope and mostly ceremonial with no real supervisory role. The current person of Holland holding ceremonial post is Albert H. McGeehan who was narrowly re-elected, serving the city since 1993. He graduated from in 1966. In 2004, U.S. President jokingly gave him the nickname, "Mayor Al" and the name has since stuck. McGeehan was first elected to city council in 1977, where he served four terms.

The reflection of the aforementioned by Dutch separatists, under the leadership of Dr. , beliefs can be witnessed in the Holland area by the separation of the two main education systems. The Public School System and the Holland Christian School system which caters to the majority population of the city and is founded on the beliefs of separatism.

*Public Schools
**
**, which serve the townships that make up Holland's suburban and rural "north side".
**Black River Public School, a with elementary, secondary, and high school students.
** (K-8).

Each May Holland hosts an annual . planting and the festival began in 1930 when 250,000 tulips were planted for the event. [http://www.tuliptime.com/about/festival_history/] Currently six million tulips are used throughout the city. Tulips are planted along many city streets, in city parks and outside municipal buildings as well as at like Dutch Village, the city-owned Windmill Island park, and at a large tulip named Veldheer Tulip Gardens.

It is normally held the second week of May, right when the numerous tulips planted around the town are blooming.

The festival dominates Holland's majority population in that members of the city's large Mexican-American minority are advised to participate in the parades.However, at the only Hispanic Festival(Cino de Mayo) Dutch participation is almost non-existant. Reflecting that the "old dutch" ways continue to dominate community and city hall.

Churches profit by providing Dutch meals to tour groups at a heavy price. In the past, about one million tourists would visit Tulip Time each year to which the community finds innovative ways to enhance self-funded projects. It has been ranked as America's third largest town festival and was named 's best small town . [ [http://www.hollandgo.com/ HollandGO.com ] ] The Tulip Time Festival has attracted big name acts in recent years such as: in 2000, in 2001, in 2004, and in 2006. visited Tulip Time in 2007 along with .

The city is serviced by two public airports, the recreational airport codes|HLM|KHLM, and the larger, corporate and charter jet airport codes|BIV|KBIV. Neither facility is served by regularly scheduled commercial carriers. The city is also served by regularly scheduled Amtrak service (the "Pere Marquette") east to Grand Rapids and west to Chicago with connections to all points east and west.

The city is served by the MAX (Macatawa Area Express) bus system. Which offers both fixed routes linking different parts of the city as well as large commercial centers outside the city, which is the former Dial-A-Ride system.

The city is served by the following highways:
* (Gerald R. Ford Freeway)
*
*
*
* appease=Media=