Battle Creek is a city in the U.S. state of Michigan, in northwest Calhoun County, at the confluence of the Kalamazoo and Battle Creek Rivers. It is the principal city of the Battle Creek, Michigan Metropolitan Statistical Area (MSA), which encompasses all of Calhoun county. As of the 2010 census, the city had a total population of 52,347, while the MSA population was 136,146.

Battle Creek, known as the "Cereal City", is the world headquarters of Kellogg Company, founded by Will Keith Kellogg in 1906, whose brother, Dr. John Harvey Kellogg, invented cold breakfast cereal as an alternative to the traditional meat-based breakfast. It is also the home of Post Cereals, which was part of General Foods Corporation at one time, then Kraft Foods, and is now part of Ralcorp.

In 1982, voters approved merging Battle Creek Township with the city of Battle Creek, under pressure from Kellogg Company, which threatened to move its headquarters away from Battle Creek if the city and township did not merge.[5][6] Battle Creek is currently the third-largest city in Michigan by area, after Detroit and Grand Rapids.

The name "Battle Creek" had its origin in a skirmish between a government land survey party led by Colonel John Mullett and two Indians. According to various accounts, while Mullett and his group were surveying an area several miles from the present city in the winter of 1823-1824, the work of the survey party was interrupted by Native Americans. Two members of the party, who remained at the camp, were attacked by two Indians, reportedly attempting to steal the party's provisions. During the fight, shots were fired from a rifle, and the two white men subdued the Indians, inflicting a serious injury to one of them. The survey party promptly left the area and did not return until June 1824, after Governor Cass had settled the issue with the Indians. Due to this incident, the nearby stream was called the Battle Creek River.[7][8][9][10][11] The river was formerly known by the Native American name of Waupakisco, to which some attribute a folk etymology for the name. By this account, the name Waupakisco or Waupokisco was a reference to an earlier battle fought between Native American tribes before the arrival of white settlers. However, Virgil J. Vogel establishes that this native term had "nothing to do with blood or battle".[7][12]

The first permanent settlements in Battle Creek Township began to be made about 1831, with most choosing to locate on the Goguac prairie, which was fertile and easily cultivated. A post office was opened in Battle Creek in 1832 under Postmaster Pollodore Hudson.[13] The first school was taught in a small log house about 1833 or 1834. Asa Langley built the first sawmill in 1837. A brick manufacturing plant, called the oldest enterprise in the township, was established in 1840 by Simon Carr, and operated until 1903. The township was established by act of the legislature in 1839.[14]

Other municipalities in the Battle Creek area

In 2011 the Battle Creek Enquirer relocated to the city's Commerce Pointe.

Battle Creek is served by several radio and television stations, including:

WNWN-FM and WKFR are typically the top-rated radio stations in the market. The area can also receive radio and TV broadcasts from Grand Rapids, Kalamazoo, Lansing and other nearby cities. 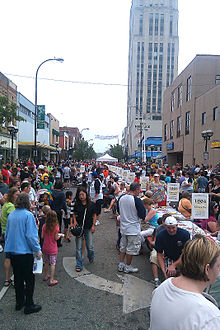 Battle Creek houses one of the branches of The Music Center, which serves South Central Michigan.

The Battle Creek Girls Chorus is directed by Meredith Bowen. It is made up of young women between the ages of seven and eighteen. These young women are placed into one of three ensembles, based on an audition. They tour all over the United States and abroad, including places like New York City, Los Angeles, Chicago, London, and Paris.

The Battle Creek Boychoir is directed by Megan Boyd. Boys between the ages of seven and fourteen can join the Boychoir by audition. They will be placed in one of two ensembles. They travel around the United States and abroad, as well.

Ars Voce, meaning “Vocal Art”, is made up of twelve vocalists who perform a capella music from many different genres.

Battle Creek Community Chorus is directed by Meredith Bowen. It is an adult choir for people who enjoy singing and music making.

Sojourner Truth Choir is a gospel choir, directed by Pauline Norris. The choir is made up of school aged children, seven and up.

Battle Creek is the home to The Battle Creek Symphony Orchestra, whose home is at the W.K. Kellogg Auditorium in downtown Battle Creek. The symphony is currently conducted by Anne Harrigan.

The Brass Band of Battle Creek is composed of 31 brass players and percussionists from around the United States and Europe. “Created in 1989 by brothers Jim and Bill Gray, podiatrists and amateur brass players from Battle Creek, MI, the BBBC has grown to cult status in Battle Creek, where BBBC concerts are regularly sold out and waiting lists are created weeks in advance.”[19]

In August, 2010, Battle Creek was host to the eighth edition of the International H.K.D Games. 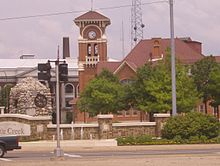 The Battle Creek Knights are a minor league basketball team. They were a charter member of the International Basketball League (IBL) and went 21-0 during the league's first season in 2005, winning the championship. The team's home is Kellogg Arena. After announcing in July 2009 that they would sit out the 2009 season, in October the team announced that they would return to play in the International Basketball League.[20]

The Battle Creek Bombers are a collegiate baseball team, a member of the Northwoods League, who began play in 2007. The team's home is C.O. Brown Stadium.

The Battle Creek Revolution are a member of the All American Hockey League and began play in 2008. The team's home is Revolution Arena.

The Battle Creek Blaze is a not-for-profit, semi-professional football team that plays traditional American football and is a member of the GLFL (Great Lakes Football League) and a former member of the USFA (United States Football Alliance)and IFL (Interstate Football League). The Battle Creek Blaze is a Domestic Nonprofit Corporation with Public Charity Status 170(b)(1)(A)(vi), as well as a 501(c)(3) Federal tax-exempt organization that raises funds and community awareness in the fight against cancer. They are in their fourth year of operation, and won the IFL North Division Championship in 2010.

The Michigan Battle Cats/Battle Creek Yankees/Southwest Michigan Devil Rays were a Class A minor league baseball team that played in the Midwest League from 1995 through 2006. The team's home was C.O. Brown Stadium.

The Battle Creek Crunch, were a member of the Great Lakes Indoor Football League (GLIFL), that began play in 2006. They played only one season in Battle Creek before ceasing operations due to financial trouble. The team's home was Kellogg Arena.

In 1982, at the insistence of the Kellogg Company, the city annexed Battle Creek Township, nearly doubling the city's population. Kellogg's even went so far as to threaten moving their headquarters if the annexation failed to occur. [1]

The City of Battle Creek has a commission/manager form of government. Cities that follow this plan of government have an elected commission (or council) that appoints a professionally trained and experienced manager to administer the day-to-day operations of the city and to make recommendations to the city commission. Battle Creek also appoints a City Attorney, who provides legal counsel to the City Manager and City Commission.

There are five ward commissioners. Residents cast votes for a ward representative, who must live within the area they are representing, as well as for four at-large commissioners. These candidates may live anywhere in the city. All commissioners serve two-year terms and all terms begin and end at the same election. The next commission election will be fall of 2011.

According to the City's 2009 Comprehensive Annual Financial Report,[22] the largest employers in the city are:

Founded in 1917, Camp Custer, as it was then known, would over the next decades serve as a training ground from World War I until the present. Parts of the base were spun off to become the Battle Creek Veteran's Hospital, Fort Custer National Cemetery, Fort Custer Recreation Area and Fort Custer Industrial Park. This industrial Park contains more than 90 different companies.

The United States Government still owns the land, but it is now administered and managed by the state of Michigan. The base, which is still mostly undeveloped, wooded land takes up a sizable portion of Battle Creek's land area. The part of the base in Battle Creek that is now the industrial park measures 4.69 square miles (12.15 km2) in area, which is approximately 10.6% of the city's area. A much larger part of the base lies in Kalamazoo County. The adjoining W.K. Kellogg Airport is a joint civilian-Air National Guard facility.

Battle Creek is situated on I-94 midway between Detroit and Chicago.

The Battle Creek Amtrak Station serves Amtrak trains on the south end of the station and Greyhound and Indian Trails bus lines on the north side of the station. The station is located downtown at 104 Capital Avenue SW, Battle Creek, MI 49017.

On May 29, 2011 a major supercell thunderstorm brought damage to over 1,100 stuctures and toppled hundreds of trees in the city and surrounding area. The winds of the storm were estimated by the National Weather Service to be between 75 and 100 miler per hour straight line winds. No serious injuries were reported due to the storm. Over 28,000 energy customers lost power, many of these for several days. Cleanup of the storm was estimated by the city to take up until July 1, 2011 at a cost in excess of $750,000.

Battle Creek has sister cities relationships with the following cities:

When the TV show The Beverly Hillbillies was first aired in the 1960s, Kellogg's was a main sponsor, and the theme song continued longer than it does in reruns today. Jed pointed to a billboard ad of Kellogg's Corn Flakes, and the singer went on: "Now come along and visit with the Clampett family, as they learn the simple pleasures in the hills of Beverly. That includes the products of the sponsor of the week, the cereals of Kellogg's, Kellogg's of Battle Creek".[25]

In the M*A*S*H* episode, "Tuttle", Hawkeye, Trapper and Radar are in Col. Blakes' office to create a personnel file for Capt. Tuttle. For a birthplace, Trapper suggests Battle Creek, MI.