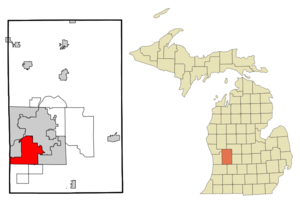 The first permanent white settlers arrived in the area in 1832, making it one of the first-settled areas of the county, and indeed the whole region. Initially, the area was part of Byron Township, . Wyoming Township was organized out of Byron Township in 1848.

The entire remaining township incorporated as the City of Wyoming in 1959 to protect against further annexation of land by the cities of Grand Rapids and Grandville. Wyoming is named for Wyoming County, , from which many early settlers came. The city's residents are a unique mix of /blue collar residents to middle class residents. The eastern section of Wyoming was originally part of Paris Township.

Wyoming is home to the headquarters of the .

The city is situated southwest of Grand Rapids and south of the Grand River. Grandville and Georgetown Township in Ottawa County are to the west. Byron Township is to the south and the city of Kentwood to the east. runs along the eastern side of the city and runs southwest-northeast along the Grand River. The newly completed runs along the south side of the city and connects I-196 with US-131 and . M-11 runs east-west through the north of the city, also connect I-196, US-131, and I-96.

There were 26,536 households out of which 35.7% had children under the age of 18 living with them, 49.6% were married couples living together, 12.0% had a female householder with no husband present, and 33.9% were non-families. 26.6% of all households were made up of individuals and 7.4% had someone living alone who was 65 years of age or older. The average household size was 2.60 and the average family size was 3.19.

The city has an with both an elected mayor and an appointed city manager. Currently, Carol Sheets serves as Wyoming's Mayor after defeating former mayor and long-time Republican politician Harold Voorhees in 2005. The city council is composed of six members: three at-large and a representative from each of the three wards. The current council members are: Kent Vanderwood, Jack Poll, Sam Bolt, William Ver-Hulst (Mayor Pro-Tem)(1st Ward), Richard Pastoor (2nd Ward), and Joanne Voorhees (3rd Ward). Meetings are held at the City Hall on the first and third Mondays of every month. Work sessions are held the second Monday of each month.